Did you all have as pathetic a gardening summer as I did?  This is what Ogden Nash wrote after a long hot season is his vegetable patch.

Say not that Eve needed Adam’s pardon
For their eviction from the garden.
I only hope some power divine
Gets round to ousting me from mine.


Since Locust Hill’s vegetables were a disaster this summer, I came close to feeling like Mr. Nash, and couldn’t think of a thing to write a column about, so instead of pulling up all the frost blackened plants so I could spread well-rotted manure on the garden, I took my camera and snapped a bunch of pictures of the summer’s trials and tribulations. 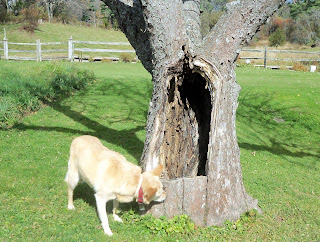 I can’t remember which thunderstorm managed to break off the apple tree limb that supported Hank’s grandfather’s beautiful swing, but as you can see, there couldn’t have been much strength left in the hollowed trunk of that ancient tree to support it. The really sad thing is that there is not a single  other tree near the house with an appropriate limb  for that swing on.

My next picture shows a small section of the backside of the perennial border’s fence.  That fence  originally bordered the meadow in front of the house when we bought Locust Hill, but since it was no longer needed there,  we dug it up and “replanted” it to be part of the sheep pasture.  Eventually the perennial border filled the area in front of it.

Of course  pasture grasses loved to creep into the nice dirt of the border, so Hank laid sections of sheet metal down to discourage them.  Unfortunately this was a total failure, and after years of constantly uprooting these weeds, I decided this past summer it was time to fix the problem. 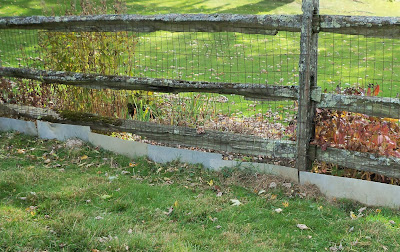 It was a mammoth job,  Just getting rid of the weeds and finding the  buried sections of sheet metal was a challenge.  Digging a  trench, then burying the sheets as uprights, lugging stones and buckets of well-rotted  dirt from the compost pile to firm them up was all such hard work that I could only manage to do a single section a day,

In fact when I took the picture above, I  saw that I still had a single section of fence not done.  How could I resist finally finishing the job?  I put down the camera, found the shovel, gloves and buckets and got to work.

You can see my reward in the next photo. The previous week I'd finally come up with a place to hang Hank's grandfather's swing. By standing on the seat of the tractor  I was able to reach up and loop rope around two beams of the long shed, and in  half an hour I'd hung the swing.

I went up and collapsed on it when I'd finished fixing the last section of fence. Daughter Trum happened to arrive as I was rocking gently in the sun and snapped a photo with her cell phone. 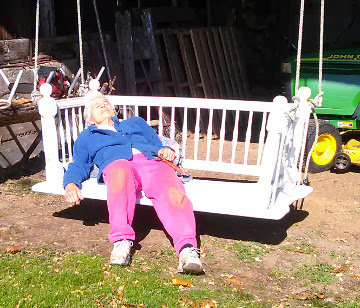 And since she also took a perfect photo of the sheep eating the remains of a Brussels sprout plant,  I will end with it.  Pilot is the big one in the center, my only male. On his left is Wimpy, a shy, elderly ewe who must be eight or nine.  My two newly acquired girls, are facing each other.  They came already named, Valiant on the left and Intrepid on the right. 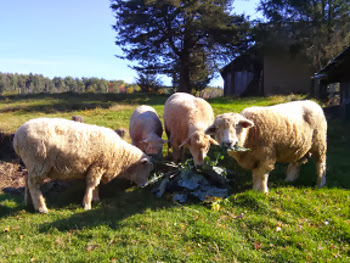