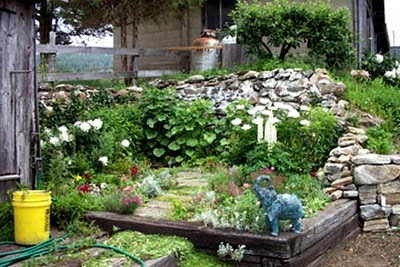 I don't like to tell stories I've included in my book, but because today's column is about the , I really must explain its beginnings.  It was originally a small stone hut built into the side of the cow pasture's hill by a hired man around the turn of the century, who preferred to sleep in this dank, windowless hovel than in the house. Later someone added a cement floor, making the ceiling so low you couldn't stand up inside. We used the building to store garden tools, broken furniture, old tricycles and trash, and it soon became known as the Alotta as it housed such alotta junk.
One evening as we were eating dinner we heard a loud crash, followed by the frantic bellowing of a cow.  When we rushed out the back door we discovered one of our neighbor's heifers inside the stone hut, thrashing around in the midst of rotted roof beams and alotta junk. Since the building's roof was on a level with the pasture at its back edge, this silly young cow had lumbered onto it and fallen through.  She was too big to get out the door so we spent the next hour pulling down the front wall in order to free her.
As we started hauling away the debris next morning it suddenly occurred to me that the remains of the Alotta would make a sweet little garden, a space 8 feet by 10 surrounded on three sides by the remaining walls of the hut.  The fact that there was still a cement floor was a minor detail. At least that was my thought, but as it turned out it was major. We not only had to break up the cement with a pick axe, we had to haul away a deep layer of stones from underneath it.
We filled the resulting hole with dirt and well-rotted manure and rebuilt the front wall into a foot high edging for the garden. By then it was too late to do much else but dream about what I would plant the next spring to turn the Alotta into the Abitta, a tiny walled semi-secret garden.
Having had little experience in designing a flower garden, my sweet dreams turned into bad ones as I struggled to create the perfect tiny garden. It took four or five years just to figure out that my flagstone path was all wrong. Entering the garden from the front, the flags were laid out in the shape of a cross, an esthetically unpleasing design.  Eventually I came up with a better arrangement, entering the garden from the side and making a curved path that led to the far corner where I placed a small pool I'd made with cement.
Over the years  I tried many different plants, both annuals and perennials, but I had more failures than successes. I planted phlox in back of the pool, but in that airless corner the leaves were always covered in mildew by July.  I planted pansies, which looked fine in May but were scraggly by June. I put in sweet alyssum, but  these delicate little plants were always smothered by the annual pink poppies that self-seeded by the dozen. 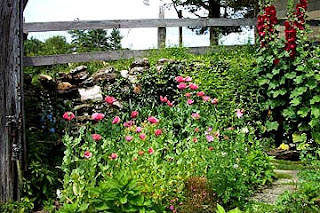 As you can see, I'm not exagerating.
The garden became a poppy party because
I never even thinned these annuals.  It's
hard to pull up flowers just because they're
growing in the wrong place, so besides the pink poppies other proflagate flowers sent their seeds to join them -  feverfew, Chinese forget-me-nots, columbine, dianthus.
Despite all these greedy interlopers there were a few successes.  The nice old-fashioned hollyhocks on the back wall in that photograph, managed to keep coming every year, even though they're biennials - new ones replacing the old.   By pure luck I planted two peonies in spots where they looked well.  Daughter Bridget gave me a little machine to make a small fountain in the pool.
Daughter Trum brought me five different varieties of thyme from ( plant prices in are a quarter as much as they are in ) and helped plant them between the flagstones where they thrived and spread their tight mats of tiny leaves.  And last year I picked just the right places to plant a white lupine and a stately delphinium.
Take heart all you inexperienced gardeners.  I struggled for more than thirty years  to get the Abitta garden even close to what I'd envisioned as I broke up the cement floor of that hired
man's hut. The Abitta garden is still far from perfect, but each year it gets closer to my dream of what a tiny walled garden should be.
Posted by Weeds and Wisdom at 7:33 AM No comments: