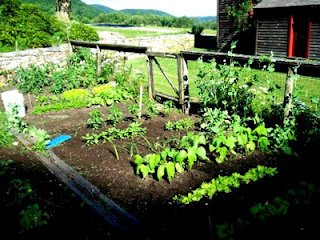 This new computer is still giving me grief, but it has one program that is really great.  It’s called Mail Chimp and wheneever I post a new column it let’s me  write a single email to all my readers, then set a date and time for mailing it.  So here I am in California playing tennis with my three daughters, and you’re getting this column.

It’s just a poem I probably composed thirty years ago, but vegetables don’t change much.  Enjoy.  Hopefully when I get back home I’ll be able to write a column about the fabulous gardens we saw in California.

The vegetables were arguing
Which one of them was best,
Which had the most achievements,
Which was the tastiest.

The beautiful asparagus
Spoke up the first pf all –
“I maybe past my prime, my dears,
But no one grows so tall.”

“Aw, Shucks,” the corn grinned down at her,
“I guess I shouldn’t boast,
But my old stalk can stretch beyond
The highest garden post.”

A ripe tomato shyly spoke,
“I’m fancy and high-bred,
I love the heat, it makes me sweet.”
She blushed a rosy red.

The Swiss chard leaves began to curl
And yodel at the sky.
“Our stems get cut right at the butt,
Yet still we multiply.”

“Such bickering!” Aunt Lettuce sniffed.
“I think my head will split.
We’ll never figure out who’s best
Til we calm down a bit.”

The mealy-mouthed potato moaned,
“I’ve got the scabs this year.
I’ve had no starch since early March.”
She shed a milky tear.

“Oh wipe your eyes,” an old beet said,
“At least you’re not too plump.
If I continue gaining weight
They’ll throw me on the dump.”

The cucumber let out a burp,
“My indigestion’s bad.
I guess it must have been that dose
Of garden lime I had.”

“Pipe down!” the red hot radish yelled,
“Pipe down, you silly clods!”
And each young pea laughed out with glee
And nearly split their pods.
The carrot plants got all choked up.
It really was absurd.
Their heads were buried in the dirt
So none of them were heard.

Poor Mr. Celery tried to speak,
His skin a sickly white.
His voice was just a whisper ‘cause
His collar was too tight.

Then Grandpa Cauliflower coughed
And shook his snow white head.
“I think we’ve bickered long enough,
Let’s get to work,” he said.

The vegetables all dug right in,
Their argument forgot.
And each long row began to grow
To fill the garden plot. 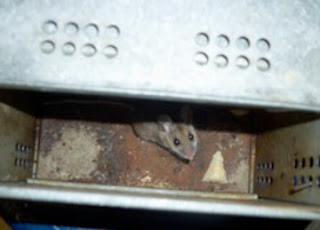 We’ve had mice problems since our very first day on Locust Hill.  And not only mice but
rats.  Since our little farmhouse hadn't been lived in for six years, I suppose it made an inviting home.  Eventually we got rid of the rats, but we still get plenty of mice, especially in the winter.


Sad to say, my cat at age 18, died and hopefully went to a land of heavenly catnips in the sky.  Not that she’d been solving my mouse problems all these years.  She much preferred being outside catching moles, and once even a chipmunk.

Mice love Locust Hill. In winter they take over the dozens of bird houses on the place. Three or four set up housekeeping in these safe little boxes.  When I go out with a stick to clean the nests in early spring, they have a total panic attack at my invasion, scrambling around and finally leaping down to the ground. I went out several weeks ago and managed to get a few pictures of these little guys. 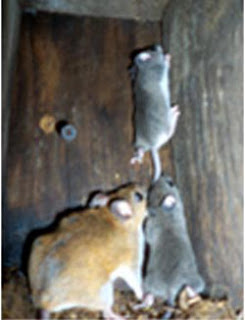 Catching mice in a simple snap trap never appealed to me. It  not only looks painful, it IS painful if it snaps shut when you’re trying to set it. I use what I call a “Hav-a-Heart trap, a metal box that sweeps curious mice into a holding area until I release them.

I have two of these benevolent traps.  The Mouse Master, made by Whitmire Micro-Gen, doesn’t compare to the Ketch-All made by Kness Mfg.Co. On winter mornings it almost always contains at least one prisoner which I can easily release from the trap far from Locust Hill. Both traps can catch more than one mouse, but the Mouse Master never manages it, while the Ketch-All often has two little guys nervously peering up at me.  I suspect that the first caught mouse probably squeaks pitifully to his friends, who come to help and are swept in to join him.

I must admit that coping with these captured mice when you’ve hardly swallowed your first cup of coffee, is not the greatest way to start the day. Having that appealing little face with its round frightened eyes peering out at you is hard. Most captives are so scared they don’t even eat the cheese I’ve used as bait.


Last month I had such a strange mouse experience that it inspired me to write  today’s column.  That morning both my traps were empty, but every time I went into the kitchen I heard little scratchy sounds. I peered in cupboards, inside the waste basket, just about everywhere until I suddenly saw a whiskered wiggling nose.


Guess where this mouse was hiding. In the toaster!  I could just make out his little pink nose  poking out from a hole no bigger around than my index finger.  I’ve circled it in red 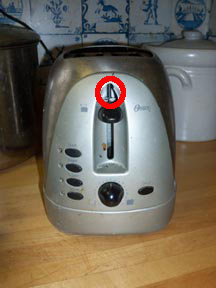 Not wanting to turn the poor creature into toast, I pulled the plug, then tipped the toaster upside down and shook it.  Nothing happened.  I examined every possible place where he could be hiding with no luck.  When I set the toaster back up I could still hear him inside.


I’m happy to report that that clever rodent must have escaped the toaster because there were no more little scratchy noises, much less a yowl of pain when I finally decided to make some toast. The mystery of how he got in or got out, however, will remain a mystery.  Hopefully he is now in one of my birdhouses, curled up in a nice  cozy nest. 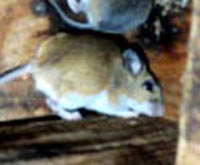 How’s that for a mouse tale?  I couldn’t resist writing about my mouse experiences, especially when I had all these photos to use.  If you like the idea of using a benevolent trap like those I've mentioned, they're easy to find on the Internet.  .