A Flower for Funerals? 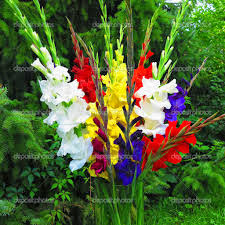 How do you feel about gladiolas?  Just about everyone I ask this question of gives me a very negative reply.  Yuck!  Funeral Flowers!  One gal actually gave me this quote –

She saw my gladiola bed
and as she looked at them she said,
“They make me think of being dead.”

Yes, there’s no doubt that these bright  spikes of color  are the standard decoration at funerals. I remember when Hank’s father died, we found a list of his preferences – along with a requests to be cremated,  favorite hymns to be included at his memorial service, and contributions to Ducks Unlimited in lieu of flowers. This was followed in red block letters  NO GLADIOLAS!

I might never have grown these showy blooms  myself, but for the fact that the first year I ordered my seeds for the vegetable garden from Jung’s, a nursery in Wisconsin that a friend had recommended, they included a bonus of a dozen gladiola bulbs.

I knew nothing about these funny looking corms when they arrived,  and hadn’t been to enough funerals to  think of them as death decorations.  But I didn't even know what colors these knobby bulbs would produce, and I wasn't too enthused with the idea of having to dig them up each fall and store them in a cool dry place every winter  Being a terrible penny pincher, however, I wasn't about to throw them away. As Hank would say "Never look a gift horse in the mouth."

My perennial border was so new it could hardly be  considered a border.   It contained only a dozen plants, all given to me by friends. What harm to add a dozen gladiolas?  That summer as each one bloomed I tied a piece of colored yarn around its stem.  Being a knitter, I had all the right colors  - yellow, pink, white.  The blooms were very attractive as a background for perennials, and when fall came I dug them up,  attached  the right color yarn  to each corm and put them down in the cold cellar.

I planted the corms each spring, and separated them each fall, putting the pink, blue and purple ones in a box for the border, and the white, yellow and one a gentle orange that would compliment Over the next few years,  I separated the corms each fall, putting the pink, blue  and purple in a box to be replanted in the border, while the white,  yellow and a soft pumpkin colored one that would look well in an arrangement in the living room, I would replant in my cuting garden.

Isn't that a beauty? Now don’t put your nose up at the idea of an arrangement using gladiolas.  All alone I admit they aren’t my style any more than the name “glads” – an abbreviated word as tacky as “drapes.”  Mixed with other flowers such as zinnias, snapdragons and a bit of baby’s breath, they can fill out and compliment any bouquet.

Sad to say, back then I didn’t take photos for my columns so you’ll have to imagine those bouquets compared to the one below that might decorate the grave site of my very tacky and least favorite teacher. 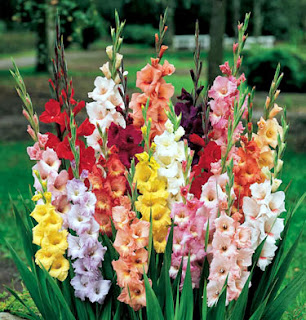 If you grow gladiolas you already know how to treat them, but for the benefit of those who have scorned them and are now looking with a less jaundiced eye, here’s the scoop.  The bulbs should be lifted with a fork before the first hard frost and set out to dry, not in the sun, for several weeks. Then the old corm, shrunken from giving birth to the fat spear of summer flowers, is broken off and discarded.

The new corm which has formed above the old is already carrying next year’s bloom.  It needs a cool dry place for the winter.  It will be ready to plant in May.  To have a longer flowering period they can be planted at two-week intervals up until July.

Think about trying a few of these showy bulbs next year.  There are miniature varieties if you feel the large ones are too ostentatious.  And think about writing your funeral preferences.  After Hank and I read his father’s requests, we spent a hilarious night writing out ours.   Maybe your spouse would hire the Tanglewood chorus to perform Brahms Requiem?  Or plant some forget-me-nots beside your gravestone?
Posted by Weeds and Wisdom at 3:30 PM