The Charm of Chickens 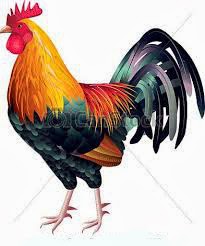 This is the last column I will write before heading south  to finally escape this winter’s horrendous snows and frigid temperatures.  I’ve picked a silly subject,, chickens, but it will be an easy one to write as I’m very familiar with these feathered friends.  My family had a flock of about 8 hens, and it was my job to fill the feeder, collect the eggs, put fresh hay in their nests and periodically clean up all the dropping from under their roost.

Each fall when the orchard just beyond the chicken coop began to drop its overripe plums and pears and apples, we would let the hens out to enjoy the feast.  One hen seemed to rule the roost, so to speak. She was very bossy, always chasing the others away from whatever fruit she found. I named her Greedy, painted her beak and toenails with nail polish and entered her in the West Hartford pet parade.  I think she won a prize as the most unusual pet, but I may be making that up.

When Hank and I moved to Locust Hill we bought six layers and discovered that if we gave them the shells from our once-a-year treat of a lobster dinner, a few days later we could enjoy an omelet deliciously flavored with lobster.  I’m not making that up. Those omelets were full of  the flavor of lobster.   Unfortunately when Hank’s doctor informed him that he had seriously high cholesterol and shouldn’t be eating eggs, we gave up on hens and started raising capons instead.

That fall the capons got fatter and fatter as Hank and I argued over who would pluck and gut them.  Neither of us minded chopping off their heads, but we both loathed these two smelly jobs.  One capon got so fat he became stuck in the small hole used to get in and out of the hen house.  Our friend Tibbie Robinson came to the  rescue, offering to do both jobs in return for two capons. These doctored roosters were truly ambrosial, but they were such a bone of contention in our marriage, we never got any more.

We did miss our feathered friends though, and a few years later, our friends the Taits, who hatch a dozen eggs for the local school each spring, offered to give us a handsome rooster.  I loved the idea of hearing a nice cock-a-doodle-doo every morning, but when I’d  picked out a colorful Banty rooster with fluffy feathers on his feet, Colin was so horrified that I wouldn’t take some wives for him that I gave in and took three ladies.

We named the rooster  Tarzan because his cock-a-doodle-doo sounded just like Johnny Weissmuller’s jungle call.  Sad to say, in less than a week raccoons had gotten all three females.  Tarzan, however, had apparently been smart enough to fly high up into a  pine tree.  We decided to rename him Celibate.  His escape from the raccoon s had taught him to always stay close to Eeyore, our donkey, and he lived for many years.

No more columns until April as I am off to New Orleans with my three girls.  Let’s hope spring will have arrived by the time I get home and I can think about gardening again. 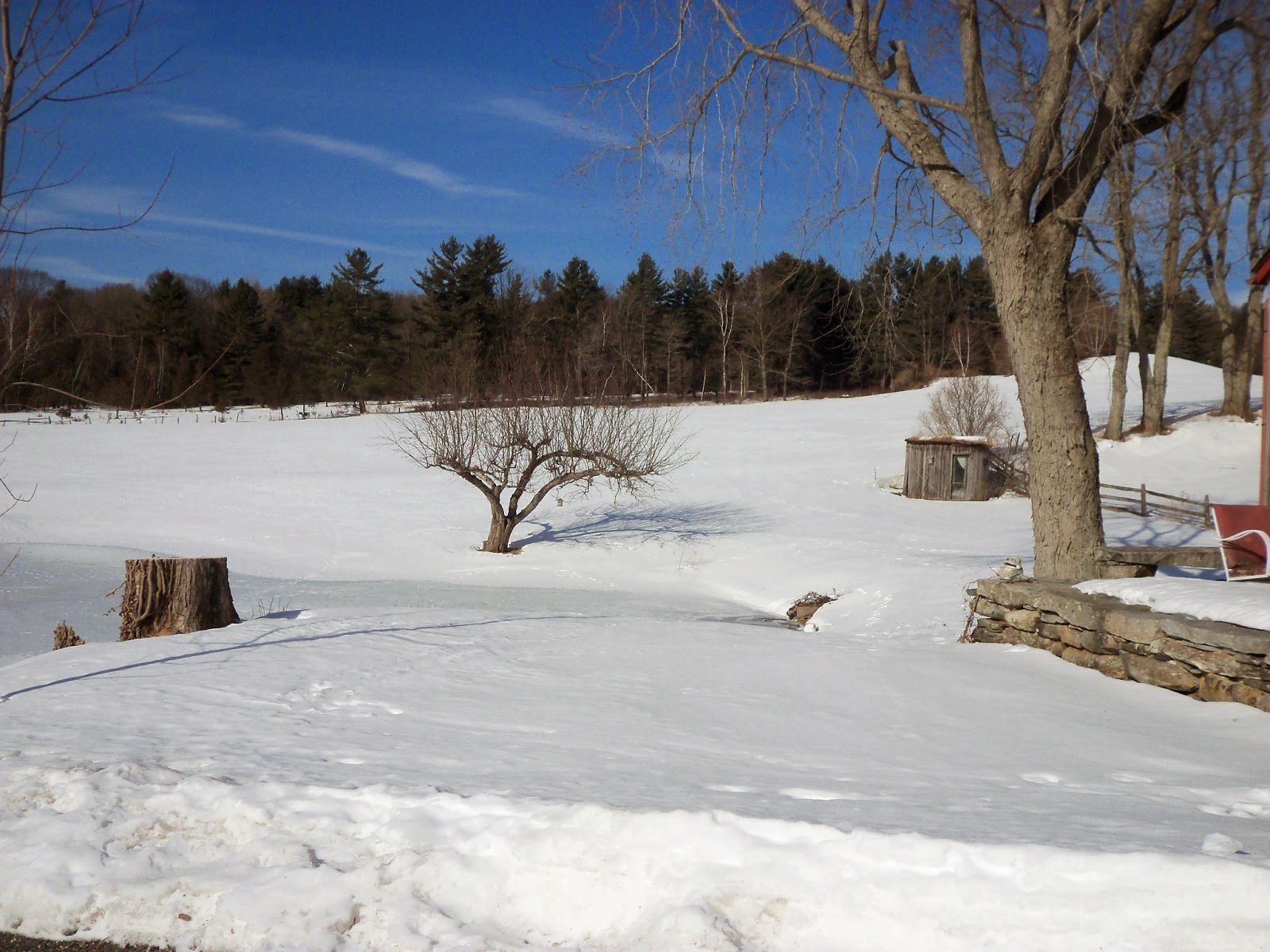 When I woke up at 5 am  one  morning  a week or so ago, the moon was as big and round as a soccer ball filling the world with a ghostly light.  A pristine white blanket covered  the entire world beyond my window as a swirl of snowflakes filled the sky. What a lot of snow!

This is the sort of winter  we used to have every year, snow right up to the windowsills.  I loved all the snowstorms back then, but I don’t feel quite the same way now.  So much shoveling is hard on the back. Making a path so I can get to the barn to feed the sheep, another to get my cart full of firewood down to the house,  and one more to get to the guest house to water my camellia.

Did you ever stop to think what it would look like if all those dizzying flakes were colored instead of white? A soft pink might be pretty, but it might look sort of sticky like the spun sugar sold at the circus. 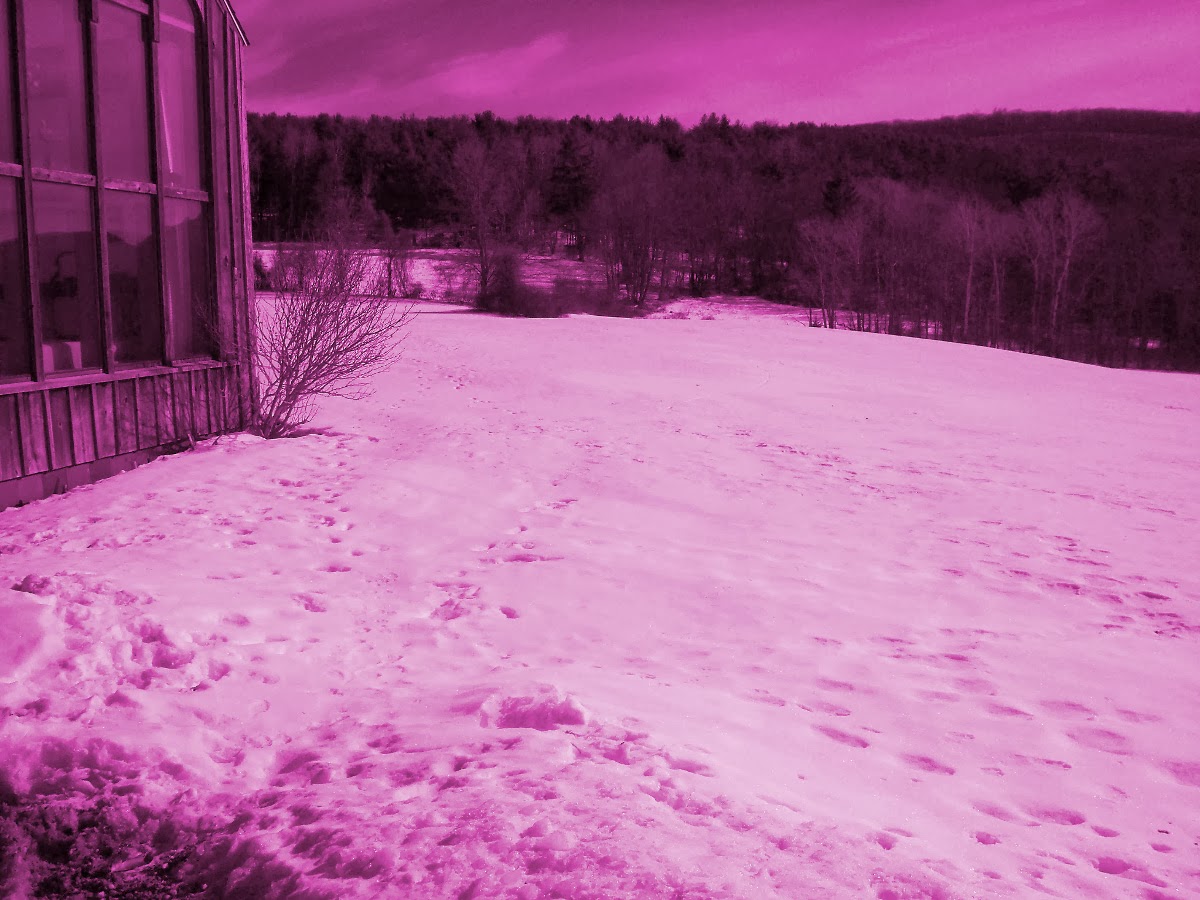 Red snow?  What a frightening picture!  Just think if our winters were blanketed in such a fiery color.   I guess black snow would be even worse though.   We should all count our blessings that Mother Nature chose white.

I wasted quite a lot of time with such crazy thoughts,. Time to get up and feed the dogs and fill the bird feeder.  Since the bears discovered and destroyed all but one of my feeders,  the birds empty the one I still have just about every day. I hang a bag of suet  next to it, but  the only birds to bother with suet are the woodpeckers.  They hang upside-down with their tails bent and
bobbing and pound away, impervious to headaches.

The hulls of sunflower seeds can be quite harmful to the soil and plants, especially pachysandra,  but the seeds themselves do no harm.  They find the soil just fine to start new seedlings in as the earth warms up in the spring.  As you might guess, that’s how this parsimonious old lady gets her new plants, They are unharmed by light frost. so I transplant them  in April to the north side of the vegetable garden.  My pole beans climb their sturdy stalks.  Both like soil that is sandy and slightly acid.

Most birds prefer the black oil  type of sunflower seeds, but if you want giant flowers you should plant the Russian type which can produce large heads, often as much as 26 inches across.  Whatever their size, the bright yellow blossoms will follow the sun with adoring eyes from dawn to dusk, the bees will buzz lazily from one to the next, and before you know it, intricate patterns of black and white seeds appear..

When the seeds begin go ripen, the  bluejays  arrive.  One can’t blame them, but catching a flock of screeching jays pigging out on my garden produce is a little annoying.  They’re so greedy, swallowing a dozen or more seeds at once, hull and all, sort of like eating a banana without peeling it.  It always used to infuriate me until I learned that a bluejay is a little like a cow – once he's gobbled his fill, he flies off to some quiet spot, regurgitates his seeds one at a time and opens them  to get the meat. 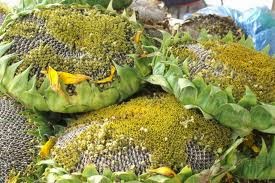 When your sunflowers are full of ripe seeds, you should cut them off their stems and hang them up from a beam in the garage so neither birds nor mice can get them. It also gives them good ventilation as they’re very susceptible to mildew.   Once dry the seeds can be bushed loose from the head.  I usually give this job to the birds by taking the whole head and setting it in a hanging flower basket  hooked over the limb of a tree.
Posted by Weeds and Wisdom at 12:21 PM No comments: