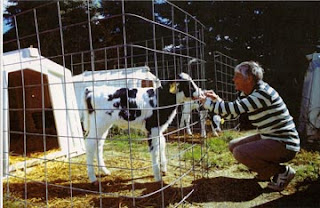 Here in New England lots of little boxes known as calf hutches are a familiar sight, but few people know the first thing about them. All too many think they're used to raise calves for veal. This is NOT the case, so I would like to set the record straight.

Before calf hutches were invented, newborn stock was kept in the barn, usually tethered in a dark corner with little ventilation. Bacterial diseases spread fast in such close quarters, so if one calf got sick, so did all her friends. Drafts and sudden fluctuations in temperature caused respiratory infections. Despite plenty of disinfectant and antibiotics, the calf mortality rate was high.

No one worried about the problem, however, except the farmers. People driving by a dairy farm couldn't see calves that were tethered in the barn so they assumed they were romping around in some pretty meadow, happily nurtured by their own mothers, a practice that vanished years ago. Now that calf boxes are lined up conspicuously along the roadside, everyone's upset about "inhuman conditions."

A calf hutch may look small as seen from a passing car, but it is no little box. A mouse living in an ice chest would feel more crowded. A calf enclosure in over seven feet long and more than three feet wide. It is deep enough to protect the calf from summer sun and winter wind and is kept as clean as a doghouse. It has a large open doorway facing south, a window facing north and a ridge vent in the roof.

As soon as a newborn calf has received that first vital nursing of colostrums from its mother, it is given ear tags and taken to its new home, usually a hutch with a large fence around its entrance. The hutch has been steam-cleaned since its last occupant, lined with fresh straw and moved to a new position. If I were a calf I'd find my box pure bliss compared to being tethered in the fetid darkness of a barn.

Newborns are bottle fed twice a day with whole milk for about ten days. They are then tethered to a hutch without a fence and fed grain and milk supplement for the next three months. Next they're sent to school, put with other youngsters in big airy pens so they can learn about sharing, competition and getting along with others.

Talk to any farmer and you soon realize that calves are "the babies" of the family, treated not only with care but with affection. Hutches usually are lined up somewhere between the farmhouse and the barn so anyone passing by can stop and say "Hi." The calves, provided with fresh air, sunlight and a little green grass to nibble, stay clean and dry and above all, healthy.

The calf hutch idea was dreamed up by Wisconsin farmers and proved to be such a success in reducing calf mortality that it quickly was taken up by New England dairy farmers. Unfortunately rumors that the "poor little fellows" in the hutches were being fattened for veal became so common that even our local residents believed them.

THE CALVES LIVING IN HUTCHES ARE NOT BEING RAISED FOR VEAL! These calves are all baby girls. They will grow up to be heifers, and once bred, will become milk cows. All boy calves are taken to auction before they're a week old. Most are bought by farmers who raise vealmost located in Pennsylvania.

Boy calves raised for veal are kept indoors in a controlled temperature of 60-65 degrees. They're fed no herbaceous food, only milk and special grain, which results in the pale, iron-deficient meat. They are kept on this diet for about a year before going to slaughter. You are entitled to feel sorry for them only if you never buy veal or order Veal Marsala or Veal Piccata when dining out in a restaurant.

Next time you pass a dairy farm, stop and let your children pet some of the babies. These future milk cows will even eagerly suck your fingers. Don't feel sorry for them. They are both happy and healthy. 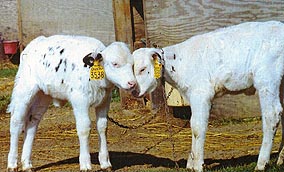