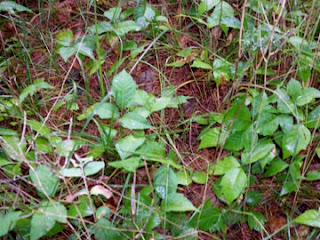 Can you spot the poison ivy in this photo? Anyone who lives in the country or spends time communing with nature learns to recognize the three shiny leaves of poison ivy in the spring when they're the color and sheen of mahogany veneer, but come summer, this menace can be hard to identify.

Poison ivy is a member of the sumac family which also includes poison sumac and poison oak.  It grows in most parts of the  also be found in , but does not grow in .  By summer the oval, pointed leaflets (only the middle one contains a stem) are a bright, smooth green, slightly hairy underneath.  Mature plants have small greenish flowers in loose clusters, followed by grayish fruits when the leaves turn a dull red in the fall. 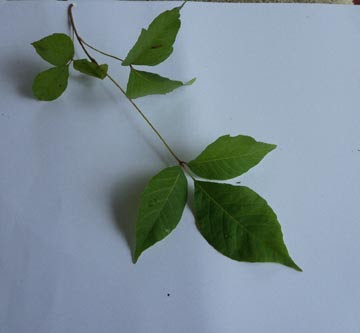 The plant grows in a variety of ways. It can keep its stems underground and just send up short erect branches to form a green mat of leaves, often mixed with other vegetation as in the top photo. In other areas it sometimes has long stems above ground, trailing over rocks or scrambling up tree trunks. When it climbs trees, its hairy stems look dead, but those hairs are actually aerial rootlets that help feed the plant.

I suspect most people could tell a horror story or two about this ubiquitous plant – the brother who ate it, the neighbor who ended up in the hospital after burning a pile of pulled plants, the friend who picked it to use in her first flower arrangement for the garden club.

My horror story took place when I was 12.  I went off to summer camp, cried myself to sleep with homesickness the first night and woke up the next morning with my eyes glued shut with poison ivy.  I spent the next several days in the camp infirmary, a grand beginning for a kid who’d never been away from home before.

Locust Hill had every type of poison ivy when we moved here.  We kept a good supply of calamine lotion or its equivalent in the medicine cabinet as all three small daughters managed to acquire that nightmare rash. Can you remember that first blissful lathering of pink glop on the itching, burning bubbles?  Unfortunately, I can also remember the flaking pink paint chips of calamine that soon dried up and made the itching agony worse than ever.

We spent years trying to eliminate the poison ivy on Locust Hill, but had no success until we acquired a goat.  Comfort, a beautiful Nubian with long velvet ears, adored poison ivy leaves. Like most goats, her stomach resembled a cement mixer, managing to digest tin cans, cigarette butts and stinging nettles as well as poison ivy. 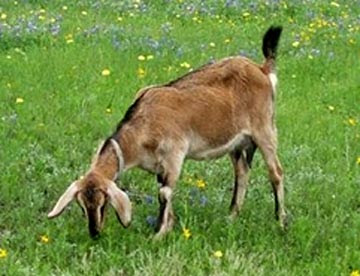 Once Comfort had gobbled up all the poison ivy, we put her in the pasture with the sheep where she gambled around in untethered freedom. Unfortunately she soon discovered that the split-rail fence was a challenging “tight-rope” she could strut across with ease.  The morning I saw her leap gracefully down from the fence into the perennial border and begin eating the flowers, she ceased to be a comfort.

Our newspaper ad offering a free goat happily found a new home for her and since then we’ve stuck with gentle, well-behaved sheep.  When my elderly flock was recently reduced to two and I asked my readers if anyone had a cheap sheep for sale, I had a delightful response.  Here’s a photo of our new young ewe, Intrepid.  Isn’t she handsome? 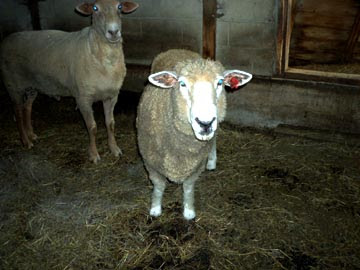 If you have poison ivy on your property, getting a goat is a fine solution, provided you keep her on a tether and bring her a bucket of water every day!
Posted by Weeds and Wisdom at 6:28 AM 3 comments: 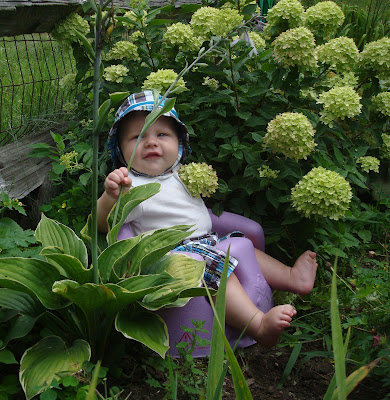 Posted by Weeds and Wisdom at 2:11 PM No comments:

Have you any  iris growing in your garden?  The iris family is very large -- Japanese, Siberian, -- but I’m thinking of the bearded iris that stand tall and stately in the May garden, providing a rainbow of colors as they bloom.  The three outer sepals of their flowers are called “falls” and have a fuzzy center known as a “beard.”

July is the best time to plant or divide iris rhizomes, those knobby looking things from which the roots dangle. They’re easy to plant if you know how, but let’s  review the proper method as it’s a big unusual.

The first step is to cut across the fan of leaves with a scissors so it’s only 3 or 4 inches high.  Then dig a hole and make a sort of hobby horse of soil for the each rhizome to sit on. Spread its roots down on either side and cover them firmly with soil   The rhizome itself is left barely covered.  It will extend itself each year, so if you’re planting a group it’s important to position them in a circle with the fans facing out.  That way they won’t get crowded for hopefully three or four years.

Sad to say, if the rhizomes get really crowded they can cause a nasty bacterial disease called root rot, especially in a wet summer.  To avoid this problem, you should replant them when they get crowded by digging them up, breaking off the elongated rhizomes and planting them again, following the same directions.

When I first started my perennial border my sister-in-law gave me about two dozen iris rhizomes.  I didn’t have a clue how to plant these strange knobby rhizomes, but I found easy directions in a good garden book. Molly had gushed over their brilliant colors, but had neglected to label them, so although they produced that rainbow of colors, it was spotty --  a blue one here, a deep umber there, a yellow one right next to a clump of lemon lilies.

I think irises are far more effective when each clump contains a single color, so a few years later I decided to rearrange them. While they were in bloom  that spring I tied  colored yarn on each one to match its blossom.  Then in July I carefully dug them up, cut their fans back and set them into piles according to their colored yarns.

By then it was almost noon, so I took a break, had some lunch and came back to replant the piles.  Much to my horror, Rosta, probably the naughtiest dog we ever owned, had been playing catch with the piles.  The lawn had rhizomes here, there and everywhere.  Not a single pile was left untouched.

I locked Rosta in the barn and faced making new piles.  Fortunately a lot of the yarn tags were still attached, and I was able to plant most of them correctly.  Rosta is long gone, but every time I look at one of my large clumps of iris, all sporting a single color, I smile as I picture what fun she had with those rhizomes.

I wish I’d taken a photo so you could see this wooly brown Irish water spaniel tossing rhizomes into the sky, but getting the camera was far from my thoughts, so the picture above was taken one snowy winter day.  If you have a naughty dog, I suggest you lock her away when you replant iris rhizomes.


Posted by Weeds and Wisdom at 1:10 PM No comments: