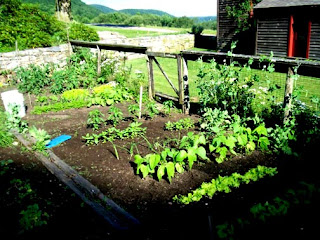 One of the things I enjoy most about living in this rural area of is its lack of crowds.  Impatient people like yours truly don’t do well waiting in line at the grocery store,  getting caught behind dozens of cars on the turnpike because of some sort of tie-up, or being corralled into a zigzagged maze of people to get through Immigration as I did coming home from the Dominican Republic.

There must have been close to a hundred weary travelers ahead of us in that line, patiently shuffling along between the guide ropes. Everyone was extremely well-behaved, no pushing or shoving, but it took almost an hour to finally pass inspection and find our way out of the airport.

Here in the Northwest Corner I hardly ever experience crowd control, at least not one involving people.  My crowd control usually involves my vegetable garden.  It took me years to learn how important it is to plant delicate little seedlings far enough apart so they can grow to a proper size without crowding.

You don’t get great heads of broccoli if you’ve planted the slim little seedlings just six inches apart, but it’s hard to picture what monsters they can turn into by mid-summer. Those seedlings need to be spaced at least 2 feet part.  They not only grow up, they also grow out, and if the outside leaves are crowding one another, you won’t get that first head worth bragging about.  It’s the large outer leaves, not the roots, that supply the fast-growing head with food, so they need plenty of space and sunlight.

Tomatoes also need plenty of room, but not until July.  For the first month or so they can afford to share their places with radishes, lettuce or spinach.  Onions are the most polite  of all the vegetables, whether as sets or seedlings.  They can be lined up in a zigzag fashion, three inches apart in a double row, or closer if you plan to thin them.

Until last year I never worried about crowd control with my pea vines which climb the garden fence.  Unfortunately the daffodils and feverfew on the other side of the fence came up so early they shaded out the pea vines before they could start climbing.  By the time they’d gotten hold of the fence, the lilies  were blocking out the sun.  I had a very poor pea crop.  Live and learn.  This year I will be planting my peas on the east side of the garden against the stone wall. 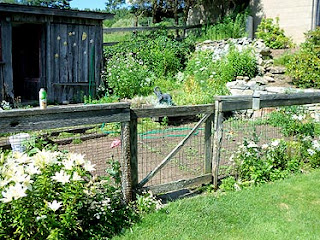 Planting seeds is a little harder to organize than seedlings.  For very small seeds like carrots or lettuce, I dig a shallow trench, then mix the seeds in a can with sand and vermiculite and dribble it down the row,  which helps space them and also keep the row weed-free.   Radish seeds are big enough to handle individually, but remember to plant short rows.  That's  because when they’re ripe they should all be picked.  If left in the ground in a few days they’ll become tough and pithy.

The seeds of bush beans are easily handled and can be planted 2 feet apart.  At least that’s what I thought until the summer I had a job working in the vegetable garden at Stillwater Farm in .  I was stunned when I saw the row of bush beans.  They were barely two inches apart.  When I offered to thin them, the head gardener shook his head "I like 'em close like that."

Those bean plants were more tightly packed than the travelers in the Immigration line at JFK, and each one produced only one or two clumps of beans.  Since there were four times as many plants as there are in a normal row, however, the resulting harvest was just as plentiful.  Furthermore, with such stiff and upright parents, the children were raised very properly, not allowed to play in the dirt the way mine do.

The cleverest method of crowd control I ever saw was my friend Bruce Zinke’s technique of planting pole beans.  He puts in a row of sunflower seeds in early spring and a few weeks later plants two bean seeds next to each sprouted sunflower stalk.  The beans and the sunflowers grow up together.  No fussing with poles or string or any of that nonsense.

Have fun planting yourvegetable  garden,.  And if you don’t have one,  think about how convenient it would be to step out the back door for a truely tasty tomato for the salad, what a treat to have really fresh lettuce instead of that store-bought stuff, and what fun to sit in the sun and snack on a handful of peas while you're weeding, Oh, and don't forget how much money one saves on the grocery bill.
Posted by Weeds and Wisdom at 1:29 PM 2 comments: 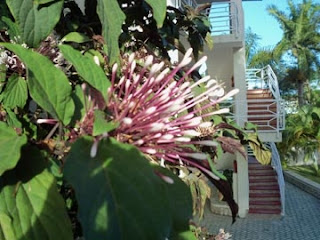 I was planning to write about all the exotic blooms I saw in the Dominican Republic today, but we (three daughters and I) were so busy playing tennis, sun tanning, swimming and eating that I only took a few photos, and most, like the one above, I couldn’t even identify.

So, instead, I want to write about raising your own seedlings since March is when you should start.  The first year I decided to try this project, I filled a bushel basket with dirt from the vegetable garden in the fall and stored it in the cellar.  By March I’d read enough to know I’d better sterilize that soil to prevent “damping off.”  This disease is often compared to whooping cough as it only attacks children, but I think a more suitable label would be crib death, as it always kills the seedlings it attack.

I filled a large pan with my soil and put it in the oven to cook. Ten minutes later I took it out.  Wow! The smell was overpowering,  and I soon realized why.  My cat had preferred my basket of dirt in the cellar to her kitty litter.  After airing the house, I went and bought some sterile potting soil.

As a gardener I find playing in dirt as delightful as a violinist must feel playing a Stradivarius.  Unfortunately store-bought potting soil isn’t quite the same.  Some brands feel like sawdust, other like shredded Styrofoam.  But it’s all sterile.

Seeds need warm soil (65 or 70 degrees) to germinate, so if you’re starting your seeds in an unheated guest room, give them an electric blanket.  I always laid an old enameled table top upside down on my blanket so the flats of seeds can be watered without shorting out the blanket.

Once your seeds have sprouted you can turn the blanket from high to low. If there’s insufficient light, rig a fluorescent about 8 inches above the seedlings.  You can leave it on day and night as the plants don’t seem to resent being expected to work without a break.  With their feet warm but the air cool, they grow into nice, thick-stemmed, well-rooted plants.

It takes at least eight or nine weeks for seedlings to be ready to face the real world, so backtrack from the date when you expect Jack Frost to leave on his summer vacation to start your seeds,.  In it’s usually Memorial Day weekend.

Tomato vines need a real head start if they’re to produce ripe tomatoes before Jack returns in the fall, so when they’ve produced their first true leaves, they should all be transplanted to their own individual pots, and each given a nice drink of manure tea.  Other vegetables that need a head start include broccoli, cauliflower, cabbage and onions. Most other vegetables do fine just being planted directly in the garden.

I will never forget the Memorial Day when I drove to to help Trum plant her first vegetable garden.  She and Clem had already done all the hard work– rototilling, raking, fencing.  The soil was a good loose loam, remarkably free of stones, and Trum, who has become a far more knowledgeable gardener than her Mom, had raised all her own seedlings, and I mean ALL.

Every vegetable she’d planned to have in the garden she had started inside in flats.  Not just tomatoes and broccoli, and onions, but peas, beans, spinach, corn, pumpkins and even carrots!! She’d asked me all about what kind of potting soil to use, how much light and water the seedlings would need, how to “harden them” off,  but she’d never asked, and I’d never thought to tell her, which seeds to plant.

The last thing I wanted was to dampen Trum’s new enthusiasm for gardening, so we planted everything and by the end of the day we had 10 full rows of growing greenery, which we quickly dubbed “The Instant Garden.”

Of course it didn’t do too well.  The baby carrots were so crooked they could have been worn as bracelets. The bean plants had grown so fast indoors that they soon became as sick and spindly as a calf with the scours.  The peas and spinach also went into shock, and the pumpkins curled up and died.  Pumpkins should always be planted in their permanent home as they can’t take transplanting.

Trum still raises her own seedlings.  Me, I prefer a little vacation this time of year.  Hope you’ve enjoyed one or the other. 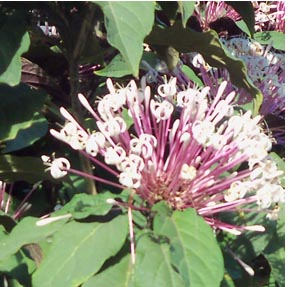 Posted by Weeds and Wisdom at 1:23 PM No comments: