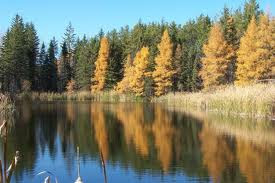 Of all my favorite months, November is NOT one. It is such a funereal month, filled with farewells – goodbye to warm, sun-ripened tomatoes and fresh lettuce, colorful bouquets of asters and goldenrod, and New England’s  flaming autumn colors.

Our woodlands stand gray and black to face the coming winter. There’s one exception, however, a most unusual tree that is just now turning from green to a warm cinnamon brown.  It’s a tamarack, the only conifer that is deciduous, not evergreen.  You may know the tamarack as a larch, or even a hackamatack, but I never knew it by any name until the year daughter Bridget turned 16 and got her license.

That summer, driving on a back road in , Bridget swerved to avoid a little bird, and then looked back (Not via the rear-view mirror) to see if she’d hurt it.  The car knocked down three guide posts, sheared 20 feet of dirt bank and landed in a tamarack tree.

Neither Bridget nor the bird was hurt and that was how I  learned what a tamarack tree looked like.  Such a unique conifer, the only needled tree native to that drops its foliage each fall. 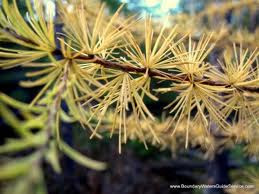 Tamarack needles grow like small shaving brushes along the branches and are soft and delicate compared to those of spruce or fir. They may be hard to tell apart from their evergreen cousins in their summer greenery, but now when other deciduous trees have been stripped naked, their needles lose their chlorophyll and become as conspicuous as polo-coated preppies at a nudist colony.

These tufts of needles have turned a soft warm brown and have opened out so that each branch looks like a tiny modern hayrake, making the trees resemble furry teddy bears.  By December their needles have all dropped and the black skeletons left bare give the impression of having been charred by a fire, looking totally dead.

Although tamaracks are most commonly found in swampy areas, they can  live equally well on a dry hillside where they grow very fast, as much as three feet a year.  Along with sumacs and poverty birches, they are often the first trees to appear in open land and are called nurse trees, as they prepare the way for trees needing shade.

After the dry dam was built just west of Winsted, I watched the open meadow beside Route 44 fill in, first with sumacs and a few popples, then tamaracks.  Eventually white pines moved in, and at this time of year make a spectacular sight of rich green and cinnamon.

Searching for more facts on tamaracks to fill this column, I located an article in a 1926 Antiques Magazine written by Hank’s grandfather describing a variety of products made from tamarack.  The wood is apparently very hard and almost impervious to water, so it is used in ship building and dock pilings.

If you’ve never known about or noticed tamarack trees right now is a good time to spot them, especially on that hillside to the right as you head down into Winsted.  n

Canaan has hardly any tamaracks, but when I drove to Sharon the other day I saw one here and one there.  They've almost lost all their teddy bear look, so you may have to wait until next November to spot one.    Happy Thanksgiving. 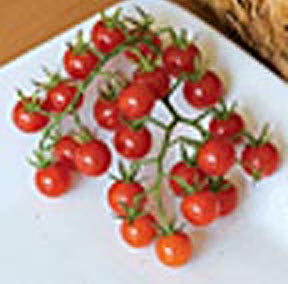 It’s a rare occurrence when reading my daily copy of the Wall Street Journal that I find an article on gardening, but several weeks ago I was stunned to discover an entire 4-page section entitled “Innovations in Agriculture.” It contained eight articles, starting with one titled Vertical  Farming about growing crops in urban high-rises, and ending with one on robots harvesting fruits and vegetables.

I’d just consumed the last two delicious tomatoes from my garden and since I refuse to buy the tasteless offerings at the supermarket, I skipped straight to an article headed with an illustration of ripe red fruit, eager to read about producing a truly tasty tomato.
The first five paragraphs explained why store-bought toms are so bland and tasteless – farmers demanding plants with high yields, retailers wanting toms with good color and long-lasting shelf life, and of course the shippers need sturdy fruits that can withstand their  traumatic journeys crammed into crates.
All these excuses for ignoring taste are well known, but the last one was a surprise, the fact that back in 1940 a genetic mutation was developed that made tomatoes ripen uniformly, but was discovered only recently to seriously reduce their sugar content.
Fortunately this mutation is not incorporated in many of the seeds sold to home gardeners such as Big Boy and cherry tomatoes as well as the Heirloom varieties.  This is one  reason our home-grown tomatoes are tasty compared to store-bought offerings.
Although scientists have been struggling to discover how to improve the tomato’s flavor, progress has been very slow because at least a dozen genes account for a truly mouth-watering tomato – its aroma, texture, sugars, acids. And field trials take years and often end in failure.
The article does end on a hopeful note.  This past May scientists decoded the tomato genome for the first time.  Plus something called “marker-assisted” breeding is now making the discovery process of genes much faster. In the meantime, growing a few tomato plants in your backyard each summer is definitely worth the effort.
I skimmed through the article on growing crops in urban high-rises. It may be of interest to city folk who have no access to local farm markets, and will be able to get produce close to home, but not to me.   The same can be said for the robots who harvest vegetables and fruit.
The other article that I found intriguing was one on the breeding efforts to improve our fruits and vegetables.  Monsanto has bred iceberg and romaine lettuce together to combine the sweet taste and crisp texture of iceberg and the higher levels of vitamin C and deeper green color of romaine.
Soon there will be seedless watermelons, broccoli with higher levels of antioxidant, its cancer-preventing properties.  Ah, a new variety of onion with less pungency, meaning no tears.  Grown for fall harvests, it will serve the winter market when the famous Vidalia onion is not available.
about all these agricultural pursuits in the WSJ was a real treat compared to plowing through all the stomach-grinding articles on politics.  I hope it inspires some of you to think seriously about having a vegetable garden next summer.
Posted by Weeds and Wisdom at 8:03 AM No comments: