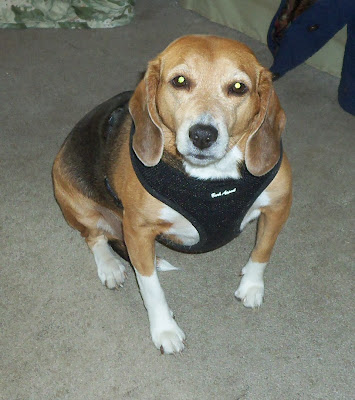 This is Coco, my new beagle.  Thank you! Thank you! So many dog-loving readers responded with helpful suggestions that the result ended my long search to find a really sweet companion for Clover. I’m afraid I’m still so wrapped up in canines that I couldn't think about anything else to write about today, but I promise  we’ll get back to gardening soon.

I just counted them up, and Coco is the 12th dog to come live on Locust Hill. Some were smart, a few a bit dumb, and one we will never forget, Rasta, an American water spaniel named for the glorious Rastafarian dreadlocks that covered her from head to clicking toenails.  I couldn’t find a photo of her, so I used a drawing  I did years ago. 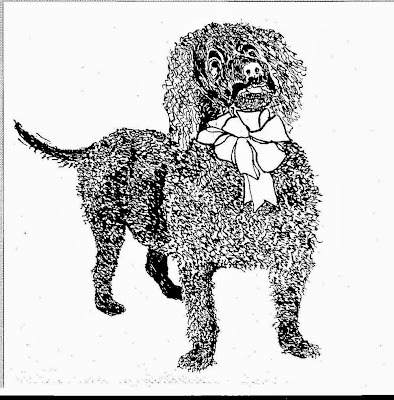 You may not be familiar with this breed – fat, short legged, oily brown dogs with oversized heads, but Hank considered Rasta

I was solely responsible for acquiring Rasta, a surprise birthday present for Hank’s 50th.  Greater love hath no man for a wife who buys him an absurdly expensive six-week-old puppy, shipped all the way from Wisconsin, and eager to be housebroken during the winter months.

When we met Rasta’s plane at Bradley, the overpowering reek of her crate resembled an uncleaned lion’s cage at the zoo. And the poor sick puppy who crawled out of it was a wet, watery-eyed ball of kinky curls. I’m still not sure how it was possible, but Hank fell in love with her at first sight. He prepared her three meals of cooked rice each day for the next month until her intestinal  problems were cured.

The thought of house-breaking during this period was a joke, provided you had a sense of humor, but eventually Rasta learned to go on the lawn just beyond the front door.  She also learned to sit and stay, sometimes as long as 10 seconds. She never chewed shoes, gloves, baskets, houseplants or library books, so long as they were out of reach.  She rarely dug holes in the lawn, only in the gardens where the digging was easy.

Being no greedier than Henry VIII, she grew into what I called a bloated blob while Hank affectionately considered  her  a beautiful butterball.  She was neither.  She was pregnant! That November she produced 11 offspring  resembling at least four different fathers.  They were cute, but not one of our fourteen Thanksgiving guests could be talked into taking one home.

Becoming an unwed mother subdued Rasta a bit, but even being spayed didn’t dampen her greeting which was not just a wagging tail but a grotesquely wagging body of violent  s-curves of ecstasy.  When she slept, usually in a packing box in Hank’s shop, her pink tongue always hung out of her mouth, and she’d wake up with it  so dry she’d be unable to get it unglued for several minutes, so she’d waddle around with this strange pink appendage stuck to her lip, sort of like a young lady unaware of the lipstick on her front teeth.

Coco is as energetic as Rasta was, but I doubt if she will be as entertaining. Obviously her previous owner allowed her to sit in her lap, so every time I sit down she tries to sit in mine.  Not entertaining! 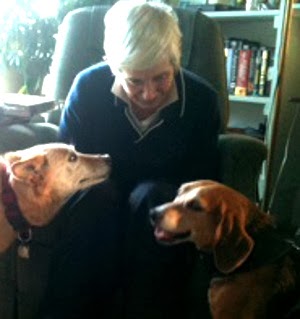 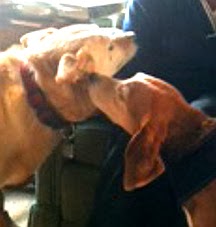 Coco is very affectionate, but poor Clover's nose is a bit out of joint.  Getting a decent photo of the two of them together was so difficult I had to have Bridget come over to take these.

Posted by Weeds and Wisdom at 6:25 PM