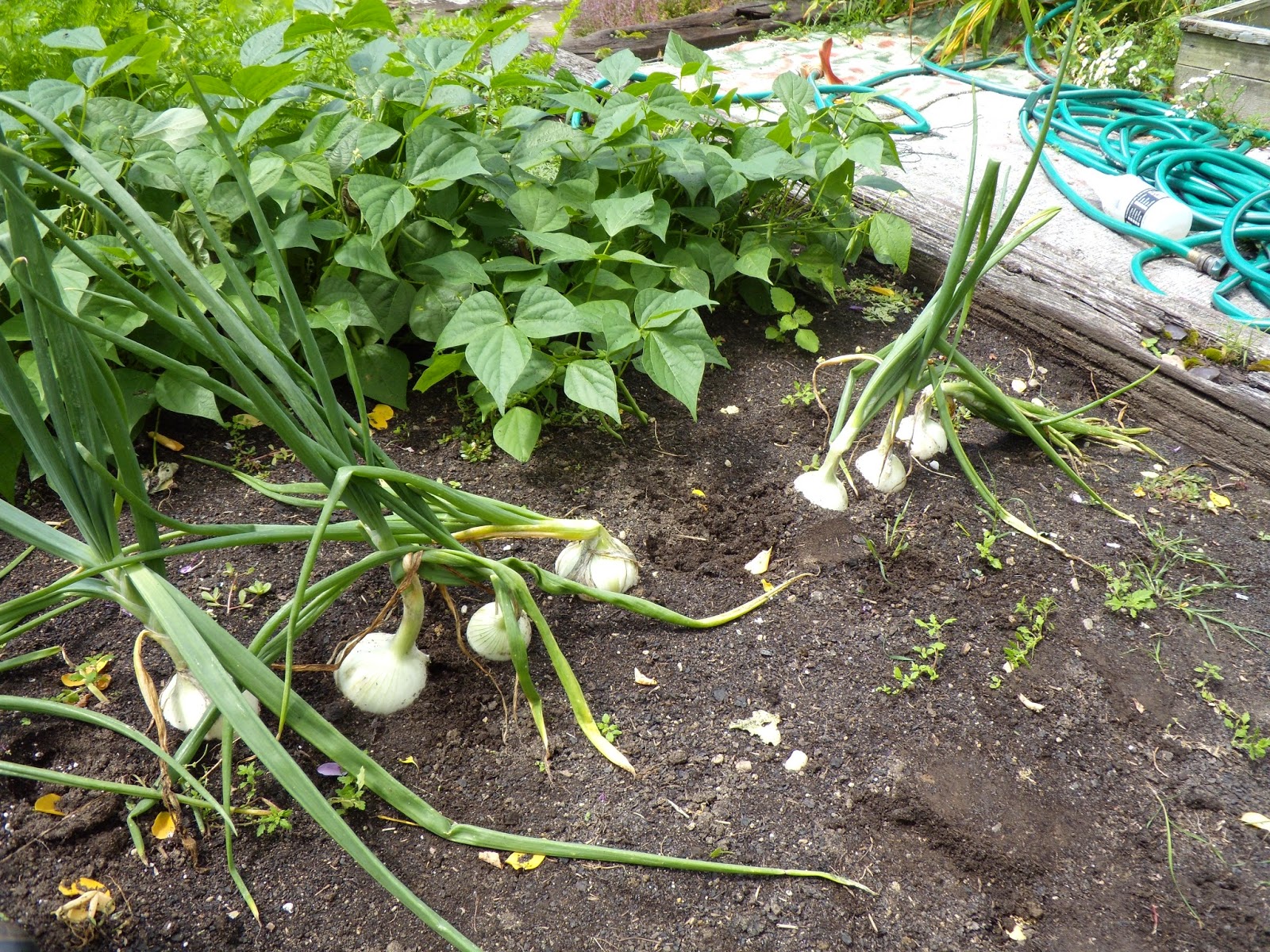 What a wealth of new words we’ve acquired since the birth of the computer.  Instead of being in a rut, we’re programmed.  Instead of adding ideas to a discussion we add input. When we relax we go with the flow.  We don’t shut down the computer, we log off..  Cookies?  Not edible. They’re text files that Web publishers store on your computer.

Feedback is one of the more descriptive words to enhance our vocabulary.  I got instant feedback  in the years I gave my garden programs, as live audiences always send both good and bad  responses.   Weeds and Wisdom is totally different than public speaking.  When I first began writing columns I really wondered if there was anyone out there reading them.  Consequently  when the first emails began to trickle in they were extremely welcome, whether they praised or panned or just posed garden problems.

In one of my early columns about  wood ashes I  mentioned that I didn’t sift my ashes any more than I vacuumed under my furniture. This elicited my first response from a reader, an Electrolux saleslady requesting an appointment.  That wasn’t exactly what I’d call fan mail, but at least it meant someone was reading my articles. 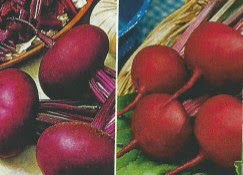 I next heard from a lady in Sharon who was having problems with her beets and requested advice. Beets are not hard to grow, but they have some definite requirements.  Like all root  vegetables, they need loose, well-worked soil in order to grow plump.   The numbly little balls we plant are fruits that each contain several seeds, so within a few weeks of sprouting they need thinning.

I find the process of thinning a morbid chore.  Pulling out unwanted plants is as upsetting as weeding out my  clothes closet of items that no longer fit. When I was young  it meant it was time to go on a diet.  Nowadays, having shrunk in my old age, it means shortening the hems on all my slacks.

Beets like quite a high Ph, 6.8 to 8.0.  Remember the rhyme – when sweetened with lime, the Ph will climb.  Adding wood ashes helps, too, as they’re rich in potassium and phosphorous, both needed by beets.  One more requirement is the trace element boron, but this is usually plentiful, so don’t worry about it unless your beets have black, corky tissue. 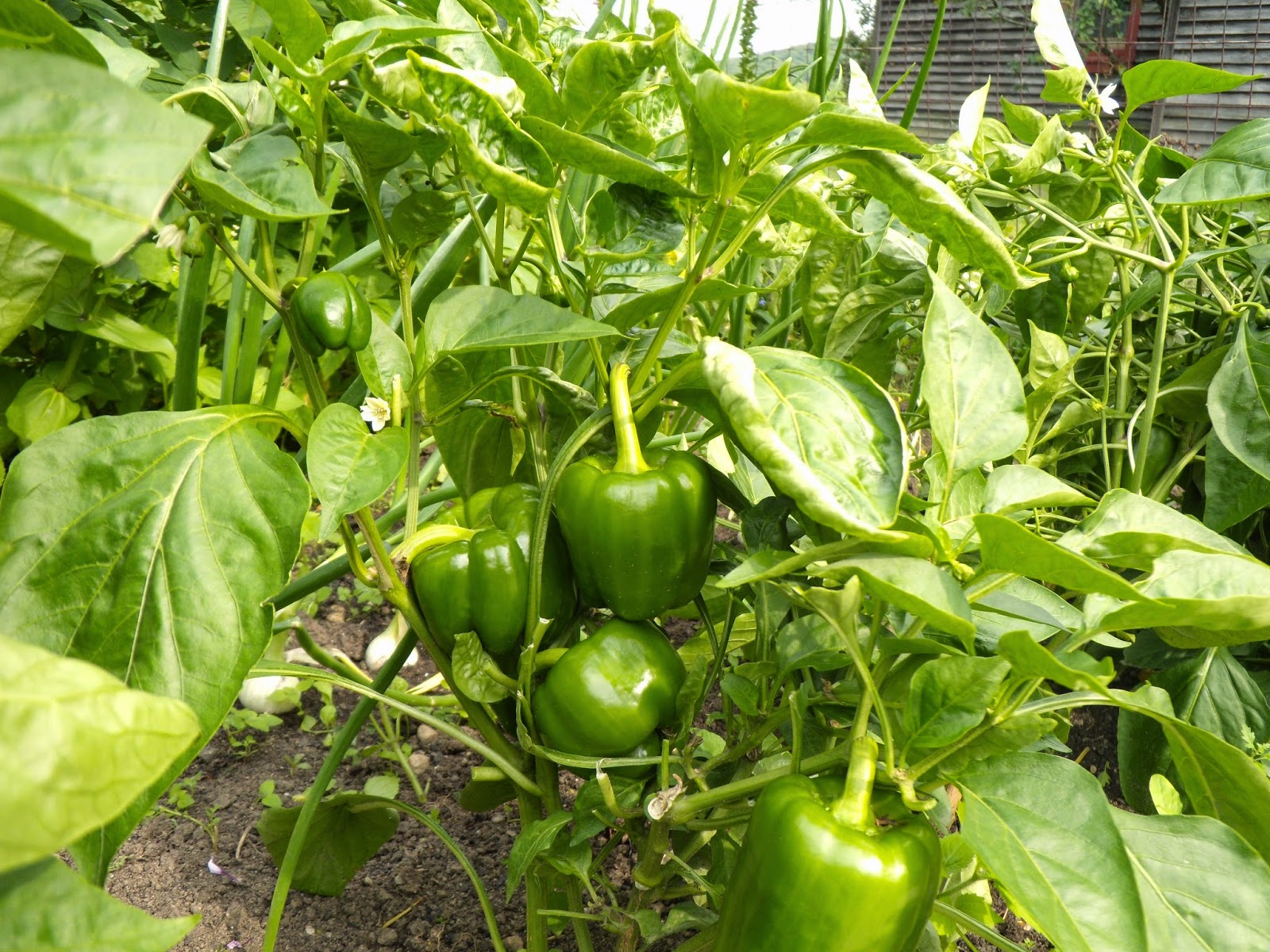 A gentleman from Torrington once asked why his pepper plants had been bushy and full of blossoms the previous summer, but produced hardly any peppers.  All pepper plants are bushy because as soon as a stem produces its single flower and two leaves, the auxiliary bud at the base of the flower grows into another branch, which also produces a single flower and two leaves, then… ad infinitum, all summer long.   Nights that are either too hot (80s) or too cold (low 50s) will really set pepper plants back, causing poor fruit or even no fruit at all.

Once pepper  plants pass the starting line on the race to harvest, they’re like marathon runners.  They like to set a nice steady pace and stick to it.  They insist on rapid, continuous growth to succeed.  If they stop to rest for too long they stiffen up.  To get a good photo of my plants I had to cut dozens of leaves and stems away in order to see the peppers.

A lady in New Hartford once wrote me that her pink poppies self-seeded each year, but she’d had no luck transplanting the young seedlings to other areas.  That’s because they have a long but very tender tap root that can’t survive transplanting. 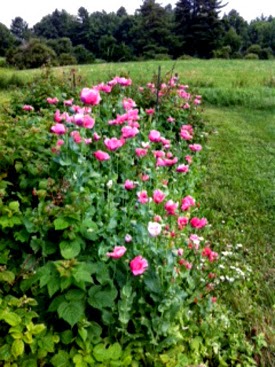 I know you’ve seen this photo quite recently, but there’s no longer a single poppy in bloom by August. Below are the seed pods.  When they ripen you can open them and sprinkle their black coffee grounds in loose soil wherever you’d like new poppies to grow the following year.  They should pop right up the following spring. 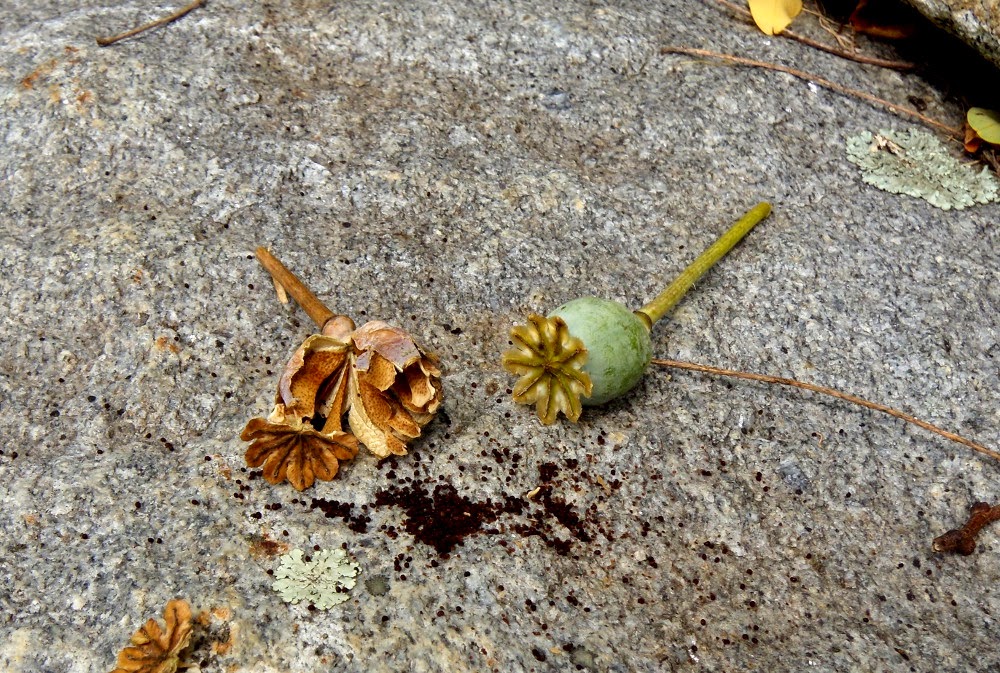 A  reader who called herself a “blooming gardener” once requested I write a column on starting a flower bed.  Despite the fact that she addressed me as Hasty instead of Hatsy,  I eventually did so.  I get called Hasty quite frequently, probably because I often am.   You can call me Hasty or Hearty,  Harmless or Hopeless, but don’t hesitate to send me your feedback.

P.S.  I've written about onions several times in past columns, so case you’re wondering –  my onions have looked so handsome this year I couldn't resist using their photo. 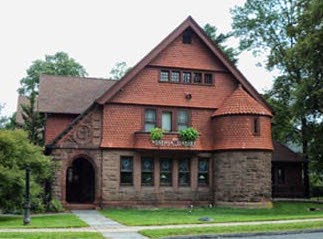 As many of you know,  the Norfolk Library has a book sale on the last weekend in August every year.  I am the volunteer who sorts the books donated for this event. I love this job, as I always discover books I’ve never read, take them home and return them before the sale.

The library accepts donations  beginning on April 1st, but this year we allowed a local book publisher to give the library 72 large boxes of books in January!  Since then the 36 foot long ramp that brings all donations down to my sorting table in the basement  has been almost continually full, despite my sorting at least 4 or 5 big boxes a day into categories. 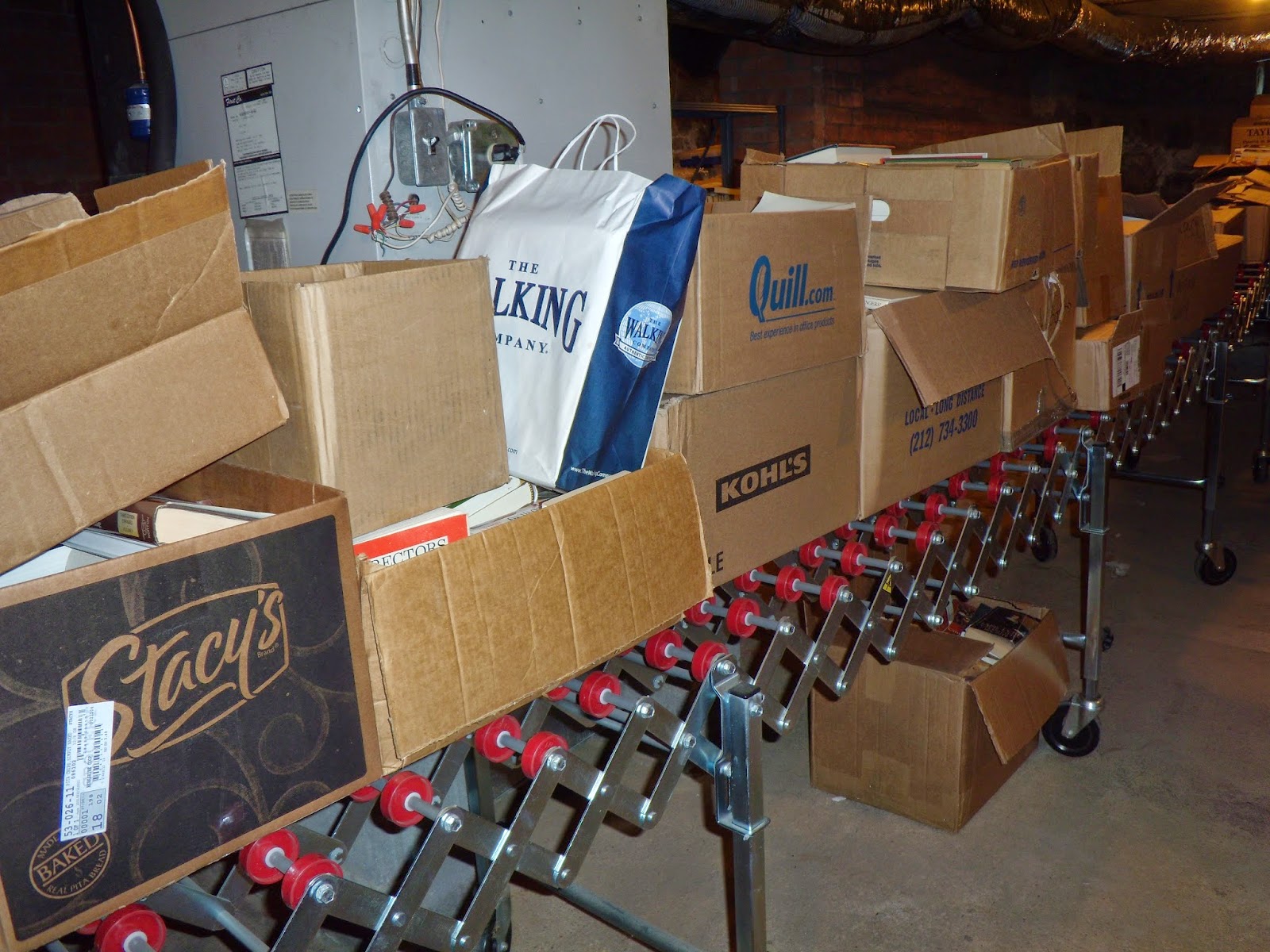 I have been overwhelmed by the amount of donations we’ve received.  I haven’t counted this year's total yet, but I bet it’s close to double what we had last year.  Everyone must be switching to E Books.  I have run out of  shelf space, so now the latest flats I label and fill for each category are being stacked on the floor. 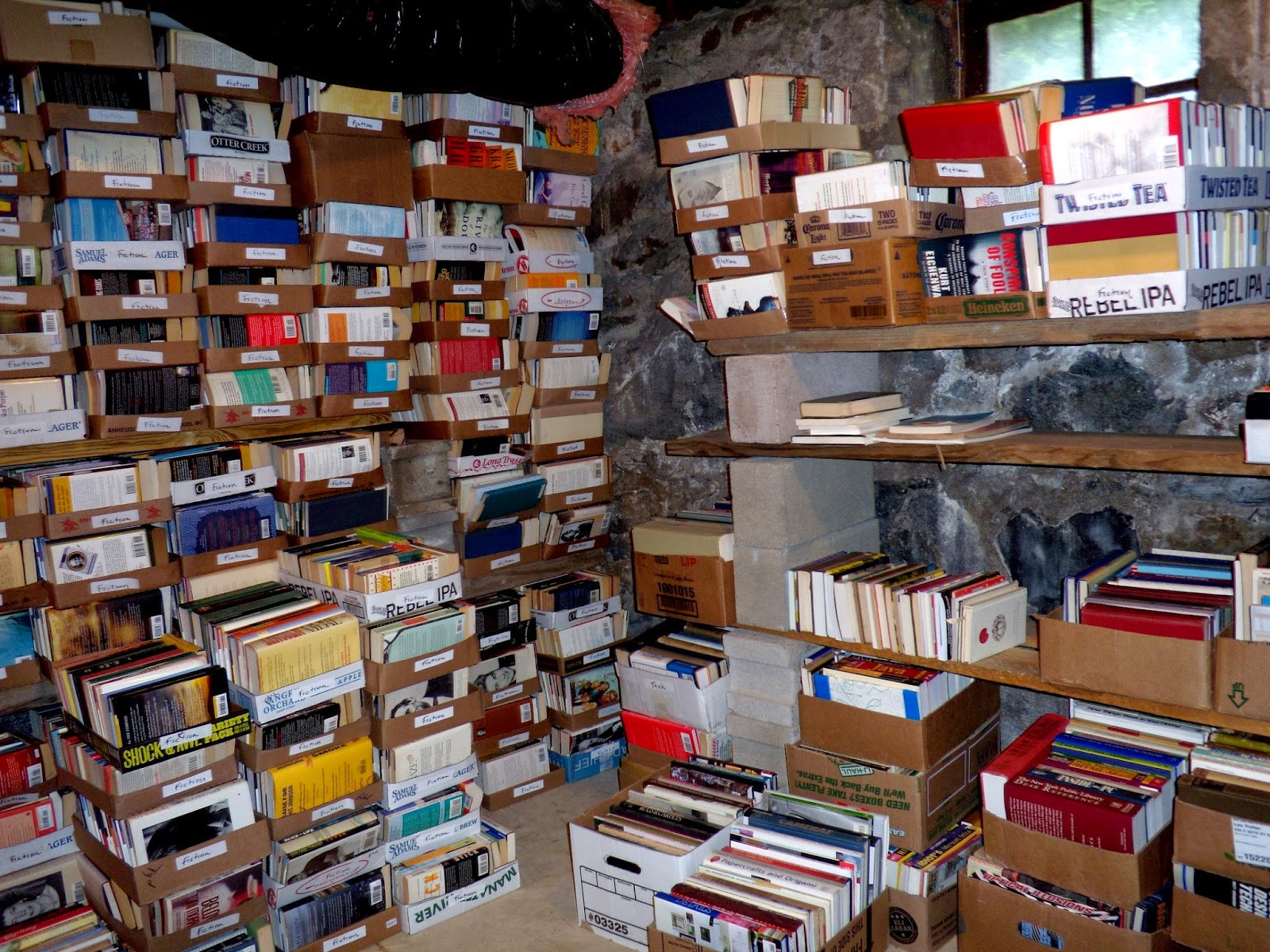 You mustn’t miss this year’s sale! The Art category includes not just large and magnificent art books, but  books on music, theater, movies, photography and dance.  If you love cooking, you’ll find several hundred cook books (wine included) to wet your appetite.  If you have kids, the children’s category is full of beautiful but very inexpensive books.

The Fiction category is always enormous, but this year History is almost as big.  In fact it is so big that we’ve divided it into two categories  -  one on History, the other on Politics.  There must be well over 200 books on Russia, including many written in Russian. 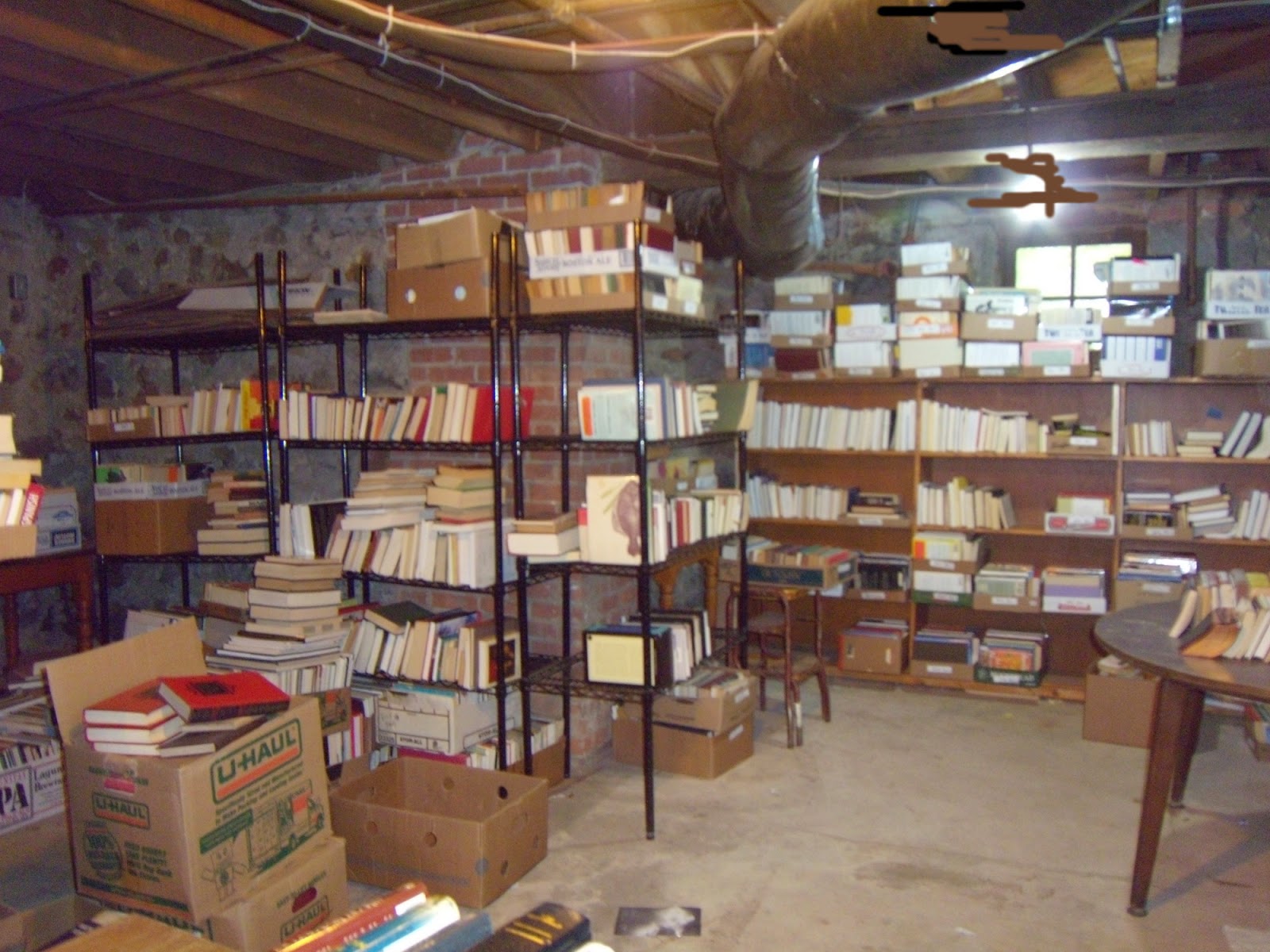 The Health category  covers such subjects as Lime Disease, Alcoholism, Home Remedies,  and dozens of other informative subjects. Other categories include  Social Science, Travel, Sports, Foreign Languages,  Business (Finance), Large Print books, Technology, which covers a multitude of miscellany, and the one I drool over, Gardening and the Environment.  Prices range from  .50, $1.00 to $2.

There are also “Books of Better Value” which are obviously priced separately.  That category includes First Editions, signed copies by authors, and handsome sets to fill those shelves you’ve all been emptying. 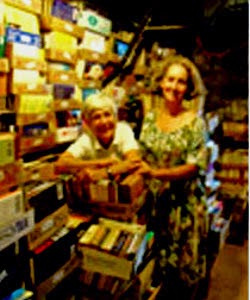 My daughter Bridget  who's been helping me down in the basement, and her friend Toby Young,  have  agreed to take on the job of running the actual book sale.  Don't forget the dates - August 24 and  25, from 10am  until 4pm, with Free books after 2pm on Sunday.

Hope I'll see all of you there!