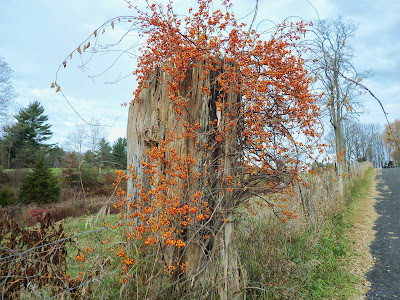 I bet I’ve written at least 20 columns about Thanksgiving over the past 30 years .  Their subjects included turkeys, Indian pudding, gourds, Indian corn, desserts and decorations, so I hope you’ll excuse me if today’s column on bittersweet sounds a bit familiar as an earlier version of it was included in my first book.

Unlike most holiday decorations, bittersweet can be had for free.  Just drive along a country road and you’ll have no trouble spotting this vine, its stems twining over shrubs and tree branches and laden with clusters of bright red berries with orange caps.  That was how I got my Thanksgiving decorations for many years.

When we moved to Locust Hill however, I was sure I would find lots of bittersweet on the property, and I did, but only after much searching.  The vine I finaly found was very far from the house, so I decided to transplant some , thinking it would make a good screen in front of the ugly propane tank.

I dug up a small piece of the bright orange root and planted it, unaware of its bad habits.  That vine grew faster than the national debt, but instead of hiding the unattractive propane tank,  it clambered over the fence into the sheep pasture. What was even more disappointing, it never produced any berries.

Eventually I learned why.  Bittersweet vines are like humans, they’re either male or female , and you need both a mama and a poppa to get any berries. The female vine may blush and bloom each spring, but if there isn’t a male flower around to provide her with pollen, it won’t do her a bit of good.

By studying the blossoms on my vine with a magnifying glass as if I were Sherlock Holmes, I learned they were boys, not girls.  By that time my plant had gone berzerk, tearing up the pasture fence and climbing the walls of the sheep barn until he had managed to get in a window.  What sort of sex-starved monster had I brought into my yard?

That summer I cut the stems down to the ground and painted each one with brush killer, but by fall a dozen new sprouts had appeared.  It took two more years before I finally managed to kill that bittersweet.  I kept looking for an appropriate spot where I could plant a new bittersweet, and eventually I did.  The town had just cut down a sick locust tree that was too close to the road, leaving behind a stump almost 8 feet tall.

It was the perfect place to plant a new bittersweet vine, a spot where it could do no damage, and only a minute or two from the house.  As you can see from the photo above, it has enveloped the stump so thoroughly I can cut large clumps of it each Thanksgiving.

Unless you have an equally safe place to plant some bittersweet,  I highly recommend that you don’t try growing this hungry plant.   Take a nice drive along a back country road until you spot those bright orange-capped berries clambering up a tree and cut some for your  Thanksgiving decorations.  Or get some nice colorful gourds and Indian corn to decorate your table.

Posted by Weeds and Wisdom at 1:50 PM