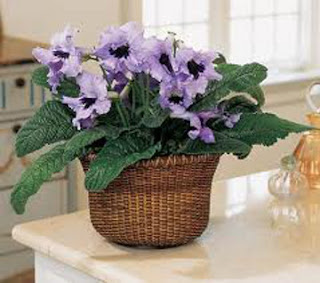 My mother became a sort of hermit in her old age, rattling around all alone in her house in West Hartford.  When she broke her hip at age 92, however,  she reluctantly agreed to hire some help.  The agency sent an attractive young girl whose name was Virus. If germs didn't immediately come to mind, wouldn't that name be as pretty as Vera or Violet?


Isn’t Vermin as appealing as Vernon, unless of course you automatically conjure up visions of rats and cockroaches?  Words like syphilis or rebella could make pretty names if you didn’t have previous notions of their meanings.  Why isn’t rancid as nice a name as David?  Is Claudia any prettier than phobia? The names for plants can cause these same sorts of problems.  Take the name streptocarpus.  You might think that attractive houseplant could give you strep throat if you weren’t familiar with the pottted plant
above, whose common name is Cape primrose.

. Isn’t the name Doll’s Eyes, a baneberry's seeds pictured below,  a more fun name than Actaea Alba? I rarely use Latin names for the plants I write about.  To me a name like Prunella  vulgaris doesn’t bring to mind the little purple flower we know as selfheal, It sounds like it might be the name of one of Hank’s old girlfriends.  Of course it helps if you know that the Latin word vulgaris means common in English 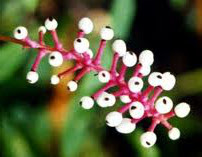 When translated, all those Latin names help to identify plants, but another even more important reason to know them is because they are universal, unlike the common names which vary from place to place. 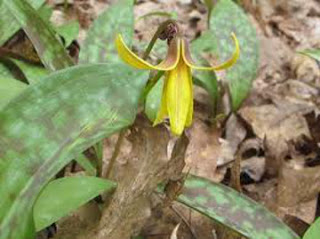 You may call the wildflower above with a little yellow bloom and spotted leaves a dogtooth violet.  Other folks call it the adder’s tongue.  I like to call it the trout lily because it is a lily, not a violet, and has those speckled leaves that look similar to a trout. We should all call it Erythronium americanum and there’d be no confusion at all.

What a mouthful! I much prefer the imaginative common names, but maybe I’d feel differently if I hadn’t had such a bad start with Latin. I spent my first two weeks at boarding school in the infirmary with bronchitis and when I finally got to my first Latin class I found I’d been placed in second year Latin my mistake. The teacher was convinced I was just panicked at missing the first weeks of class, and as a consequence I was four weeks behind when I got to the right class. By then I loathed Latin.


The first botanical name I ever succeeded in remembering was Dentaria.  Its common name is toothwort and its white blooms resemble teeth.  There are two species of this wildflower, D. multifida  which translates as "many times parted," referring to the leaves,  and D. maxima which means "largest." It could really help to know Latin.

I've never managed to keep Chimaphila umbellata and Chimaphila maculata straight, two little evergreen wildflowers of the same genus. The common name for C. maculata is pipsissewa or spotted wintergreen, a summer blooming wildflower with a variegated leaf.  It turns out that maculata means spotted. C. umbellata has no white in its leaves.  It looks like a miniature pachysandra. Its flowers are umbels. I confess I had to look that word up – “a flat-topped flower cluster in which the individual flower stalks arise from aabout the same point.”  Chimaphila combines the Greek word cheima, meaning "winter," and the Latin word phila meaning “having a preference for growing.” 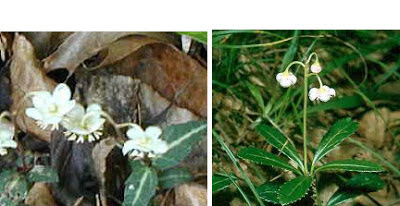 This column has suddenly turned into a lot of work.  I’m afraid I’m too old to start studying Latin. I’ll leave all those botanical names to the botanists, and spend my time enjoying the flowers, whatever their names.
Posted by Weeds and Wisdom at 12:13 PM 1 comment: 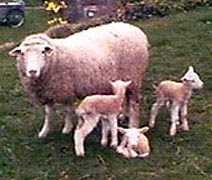 Today marks the beginning of my 31st year of writing Weeds and Wisdom. I thought just offering you a picture of my wonderful new zebra to finish off 2012 would help me over my feeling of burn-out, but it wasn’t enough of a rest, Writing garden columns takes a bit of research, especially when the world is blanketed in snow,  so because animal tales are easy I’ve chosen to write a little more about the rams on Locust Hill which requires only a good memory.
Last June I told you a bit about Rammit, the first father of our flock, Beaver, our lethargic second ram, and Zinnia, a newborn male whose mother had died.  I never finished his crazy story, so here it is.
After Zinnia’s mother’s death we were down to just  three ewes, so instead of turning two of  his daughters into lamb chops, we let them join the flock.  Of course this meant that come fall, incest would run rampant, but we didn’t think that would be a problem.
Apparently Zinnia disapproved, however. He became very cranky, backing off  and lowering his head threateningly at anyone’s approach.  We learned to treat him carefully, but that winter we’d planned a family vacation. We hired a young neighbor, Tinker, to feed dogs, cats, sheep and chickens while we were gone, and also asked our good friend Henny if she’d water the houseplants and collect the eggs.
Each morning Henny would stop on her way to work and search out the eggs laid by our roaming chickens. One day she spotted several eggs in the sheep manger, innocently opened the inner door and  collected them.
The next thing she knew she was laid out in the muck with a tongue-panting Zinnia leering down at her.  She escaped with no serious damage, unless you consider going on to the office with runs in your stockings, manure on your skirt and egg on your face damaging.
Henny never thought to close the door as she fled so Zinnia, his appetite whetted by his first victim, waited outside for his second.  That afternoon Tinker raced into the yard on his motorcycle and suddenly was racing around on foot, chased by the snorting Zinnia.
Tinker’s reaction was not fright but fury!  As soon as he got over his surprise, he jumped back onto his  motorcycle and gunned it straight  at his opponent. The chase was reversed (as the muddy tire tracks in the lawn showed for weeks afterward), and Tinker pursued Zinnia until the ram was as harmless and worn out as an old wool sweater.
Since there are no photos of  that catastrophe, here’s  one of nice gentle sheep eating their dinner. 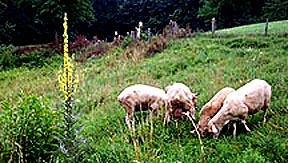 Once we’d learned about Zinnia’s behavior we  decided we should probably sell him, but before we found a buyer, he followed in his mother’s hoof prints.  We acquired more rams in future years, but I will save their stories for the next time I need a break from gardening columns