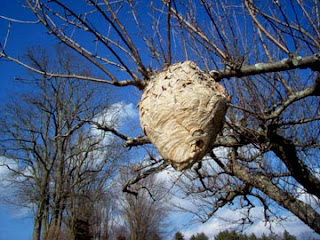 White faced hornets build the most amazing homes for themselves! Last year I discovered one in the apple tree by the pond. It was just beautiful, but as I watched the dozens of hornets that were flying in and out of this huge paper nest, I decided to stay clear of it until frost had killed its inhabitants. When at last there appeared to be only a few left buzzing lazily around the entrance I doused the nest with insecticide, cut down the branch it was attached to and carried it up to the guest house.


The walls of the guest house are decorated with lots of odd items - kids’ drawings, ancient tennis racquets, a collection of funny  hats, a polo mallet, old trophies, but nothing as unusual as this architectural marvel with its sculpted paper walls, so I hung its branch from a beam.

Had I known about the life cycle of these insects, I would have sprayed their nest with insecticide when I first found it.   No, if you're thinking the guest house later became infested with hornets, you're wrong.  Fortunately that did not happen. When I began reading about the royal queen and her workers however,  I realized my mistake. Each autumn up to twenty new queens are hatched  and by the following spring every one of them starts to build a new nest. So thanks to those industrious queens, there were three big fat nests in the yard this summer.

You’d think being a queen would result in a life of luxury, but that is not the case if you’re a hornet queen. When these ladies come out of hybernation in the spring they immediately starts building those amazing nests, and there’s no one around to help them. Each queen first makes a thick stalk that will hold the nest to a limb, then she creates what looks like a honeycomb about the size of an egg. She encloses it with two or three layers of paper which she makes by mixing chewed wood fibers with her saliva. Then she lays her first eggs in the cells of this little bedroom. They will hatch in approximately a week.


But there's no rest for the weary. The queen must feed these newborns,  not an easy job as they need a mash made up of finely chewed insects. Fortunately in less than two weeks the larvae are ready to pupate, and they spin their own cocoons. When they emerge, the queen finally has some help, for these hatched hornets are her workers, ready to enlarge the nest and provide her with a bigger bedroom full of cells so she can lay many more eggs, increasing the colony.

Toward the end of summer the workers instinctively know it’s time to build a few bigger better cells. How the workers know that these cells will be filled with future queens is Mother Nature’s secret, but the workers treat the larvae in them with extra care.  They supply them with large quantities of food so they'll grow strong, for they will be the only hornets to survive through the coming winter. By the time of the first frost, the old queen and all her workers are dead and their amazing home has disintegrated. 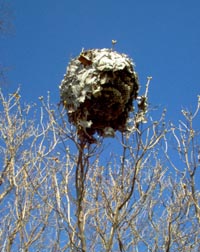 Unfortunately I didn't learn about all those healthy new queens until I started my research for this column. If I'd known I would have picked a dark summer night, donned some seriously protective clothing, and armed with insecticide, headed out to the three hornet nests. But it was too late.  The nests were gone and the new queens were safely hybernating underground.

Having read on the Internet that the stings of white-faced hornets can be deadly and one should hire a professional to exterminate them, I guess I'm glad I didn't try to tackle the job myself.  So next spring probably   half the trees on the property will be sporting new hornet nests. Oh, well, at least I got a column out of it.
Posted by Weeds and Wisdom at 7:39 AM