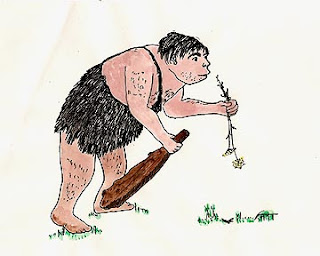 What incredible improvements have been made by plant breeders since the first brave caveman – possibly the adjective hungry would be better – nibbled on the bitter branching root of a wild carrot, or had the imagination to try eating a young thistle, the ancestor of our artichoke.
Today’s vegetables have been derived from every single organ in the plant world.  Not just from roots and fruits, but from rhizomes, stalks, leaves, buds and blossoms.  Now you and I might have been bright enough to try eating leaves like lettuce and spinach, or fruits such as beans or squash, but would we have thought to chomp down on a stem, the part of a plant we eat in celery, leeks or asparagus?
We all know that the underground tuber of a potato plant is edible, but I bet quite a few folks died from thinking the potato’s  poisonous clusters of green fruits would make a tasty treat.   It must have been quite a while before they thought to try the knobby tubers hidden beneath the soil.  We can thank some innovative primitive for opening up a cantaloupe, peeling an onion to cook, or taste the immature flower of a broccoli plant.
The ancestors of today’s vegetables contained toxic substances needed to protect them from insects and foraging animals.  It wasn’t until plants were raised in cultivation that these toxins were no longer needed for survival and man could begin to eliminate them.
Actually it was undoubtedly man’s better half who bothered to plant the first seeds in her back yard.  She may have done it by mistake, dumping seeds along with the dinner leftovers, but when they sprouted, she had the smarts to nurture them.   She weeded and watered them, maybe even fertilized them.  All these efforts improved their quality, but even more important, it allowed her to save the seeds from the very best plants so they could be sown the next year.
The great debate over whether heredity or environment is more influential in forming a human being’s character may never be solved, and the same can be said about plant life.  I always thought environment was more important until the gene-splicers started manipulating flowers and vegetables faster than you can eat a fuzzless peach or peel a tearless onion.  Still, environment plays a large part in the changes occurring in nature.
’s theory – the survival of the fittest – couldn’t work without the effects of the environment as well as heredity.  The moth that avoids being spotted by a bird because her wings are camouflaged to look like the bark of a tree lives to pass along that gene to the next generation in the eggs she lays.  The flower that adapts itself to pollination by a different species of bee when its regular pollinator has died out, passes that trait on in its seeds.
One of the best examples of the changes created in the plant kingdom by both heredity and environment is found in Brassica oleracea.  It may seem hard to believe, but this single species has evolved into nine variations – broccoli, Brussels sprouts, kale, collards, cauliflower, kohlrabi and three different cabbages – savoy, red and green.  The cabbage family is not a family, not even a genus, but a species that has produced nine subspecies.
When you stop to think about the infinite variety of delicious vegetables available nowadays, say a little thank you, not just to the horticulturalists, but to Mr. and Mrs. Neanderthal.

Posted by Weeds and Wisdom at 4:21 PM