Quack Grass - Not for Ducks 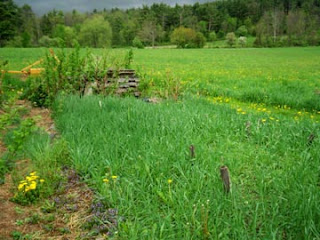 Believe it or not, the photo above is what my asparagus bed looked like this spring - a nightmare of very healthy quack grass. It was so thick that I couldn't find any asparagus until the stalks became inedible ferny little trees. The two raspberry beds looked equally horrible, another sea of quack grass.
We planted both the asparagus and the raspberries in 1982 and for almost 30 years we mulched them with hay bales each fall. In early spring when I harvested the asparagus, I would pull the few bits of quack grass which appeared. This year the sight of all that wretched grass filling the beds was as upsetting as discovering a dozen snakes in the compost pile. How was I going to get rid of that grass without killing my lovely asparagus and raspberry bushes?
I like to think of myself as an organic gardener, and do not like using chemicals, but I"m no purist and am willing to make exceptions when there's no alternative. Nowadays there are dozens of chemical products on the market to help gardeners solve vegetation problems, many of them selective, which means they only kill specific types of vegetation.
Since we have a major problem with multiflora roses in our pastures, we use Crossbow, which kills these thorny monsters without harming the grass beneath them. Grass-be-Gone is another selective chemical, which obviously kills grass, but does not harm broad-leaved vegetation. GroundClear is a chemical used on driveways or similar areas that kills everything in sight and out of sight, as it poisons the soil and all vegetation for up to a year. Round-up is a systemic that is applied to undersirable vegetation. It travels down from the sprayed plant and kills the root but does not poison the soil.
Quack grass, like a dozen other types of vegetation, clearly adored the combination of warmth and rain that spurred their growth these last two years. Being totally ignorant of how to solve the problem, I took the photo of my aspargus bed and went to see Crop Production Services in Amenia, NY. , the outfit that sells us Crossbow. They were extremely helpful, giving me explicit directions on how to treat the asparagus bed.
"In the fall when the aspargus has finished growing, mow down the bed. When the new quack grass appears, spray the entire bed with Round-up, the systemic poison that kills whatever vegetation it covers by traveling down to the roots, but does not harm the soil. Just make sure all the asparagus is gone."
And the raspberry beds? I actually was so concerned about the asparagus, I forgot to ask, but as the summer progressed the quack grass in the raspberries began to look very thick and healthy, and the raspberries started looking sick.
Raspberries are biennials. Their first year they just come up. The second year they bloom, have berries and die. These dead stalks should be removed and only two or three new young stalks should be left on each plant. Since I couldn't do anything about the asparagus until late Stepember at the earliest, I decided to tackle the first raspberry bed at the end of August. I uprooted huge hunks of quack grass and old hay and cut down the summer's dead raspberry canes, filling the pick-up truck to overflowering 3 times.
It was an exhausting job and I wasn't done. Within a week green blades of quack grass began to appear. I sprayed them with Round-up, carefully protecting the raspberries. I did this once a week. Then my wonderful yard man, Steve, brought a truckload of wood chips from the town dump and spread them on the bed. 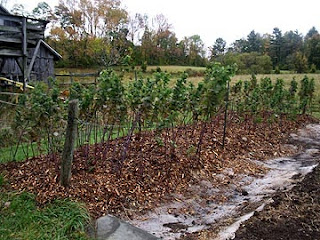 By the time we were done I just couldn't face the second bed. Why did I need two beds anyway? Steve took the cycle bar mower and cut down all the raspberries in the second bed. Then I took a trowel and dug up all their roots. Then I weeded, raked, seeded the bed with nice grass seed, watered and took a picture! There's no sign of new grass yet, but I plan to save the rest of this story for sometime next spring, including the success or failure of the asparagus bed. 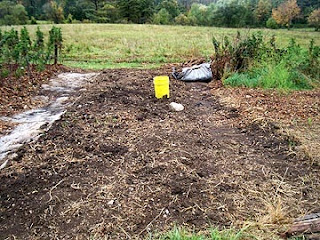 Posted by Weeds and Wisdom at 1:54 AM