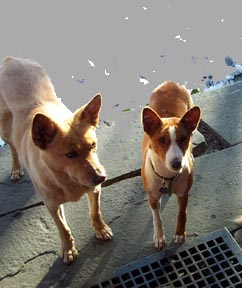 Ah, we just got another Indian summer day. There’s no way I can stay in the house when November’s temperatures get into the 60s, so Clover and Gottoo, who are always begging to take a walk, and I, took a long beautiful walk up to the cow pasture and beyond. The pasture was at its most appealing, close-cropped and smooth except for rocks and a scattering of barberry bushes to add a touch of red here and there. The pussytoes lay perfectly flat against the ground, their leaves silver rosettes. The mosses were greener than the grass, showing off their myriad shapes and textures with no need to compete with taller vegetation.

The most prominent plants at this time of year, however, are the lichens. These unusual plants form a symbiotic partnership between a fungus and an alga. It's a very happy marriage as the fungus shares his house with the alga, who provides the food for the two of them. Neither partner has roots, stems, leaves or flowers, but a fungus doesn't even have chlorophyll, so he's delighted to give shelter to the algae who do.

The gray-green lace doilies growing on our pasture rocks are lichens. Reindeer moss, the wiry clumps of pastel green growing in open spaces in the woods, is another. The algae who live in these houses are often single-celled like the green scum found in stagnant ponds. Old man's beard (not to be confused with Spanish moss which is a flowering plant of the pineapple family) drips down in long flowing streams from the branches of trees in damp forests.Some of the most appealing lichens, British soldiers, also known as red cap moss, and fairy cups, are species of Claydonia.

Lichens, though low on the totem pole of plants, have a pretty important job. They're the pioneers who build soil. Because they need no soil themselves, they can exist in inhospitable places, in arctic wastes and dry deserts and on bare cliffs. Their powerful acids eventually etch tiny cracks in a rock, loosening particles to let in the frost which disintegrates the rock further. In death the lichens' decayed bodies contribute additional material for higher level plants, mosses and ferns, to grow in.

Because most lichens contain strong acids, they're extremely bitter, but there are a few species that can be eaten. Even though reindeer moss isn't very tasty, moose and reindeer often make a meal of it. The "manna" eaten by the Israelites in ancient times was most likely one of the lichens.

I brought home several  lichen varieties from our walk to see if I could identify them. I got out The Lichen Book by G.G. Nearing, a book I'd never looked at since the day I received it as a birthday gift 39 years ago.  No wonder. The most necessary tool of a lichen lover is a microscope. I had no luck identifying my specimens, but I did have fun studying all the picturesque names - Pink Earth lichen, funnel lichen, mealy goblet, stringy name, rabbit, lemon, bristly, dark blister.

I then spent several hours playing around with my photo software making a picture to go with the following poem, one I wrote back in the days when I talked and sang about plants to school children. 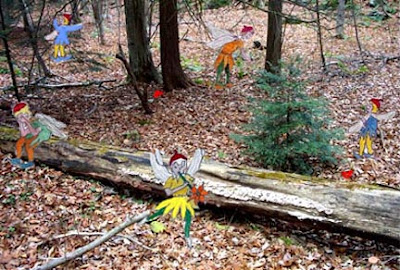 Do you believe in fairies, who dwell within the wood?

They're very real, I promise you, and if you don't you should.

They have their parties with the moon when people are abed

They laugh and sing and drink the dew, the mushrooms are their bread.

He find a field of sleepy cows, for all the elves have gone.

But once he caught them unaware - they'd had a rowdy night.

Their tiny gray-green drinking cups were scattered left and right.

And some had left their red wool caps behind among the moss.

When they got back to fairyland I'm sure the queen was cross.

So do believe in fairytales and never doubt yourselves,

Though all you'll find will be the signs, and not the elves themselves.
Posted by Weeds and Wisdom at 11:45 AM