Tribute to the Sun 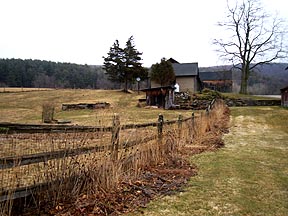 Oh, dear, the end of Daylight Saving always makes me feel as gloomy as a kid sent to bed without dessert. How bleak and colorless my perennial border looks as we say farewell to summer. I think I'm one of those people who go into a decline when deprived of sunlight. I've never been diagnosed with the syndrome known as Seasonal Affective Disorder (its wonderfully appropriate acronym is SAD) but supposedly it can be cured by sitting in front of fluorescent light tubes which emit the full spectrum of light found in sunshine.

I'm too cheap to buy one of these sun boxes, but by December 26th, the day with the year's least sunlight, I always wish I had. In January the sun's rays offer us nothing but bleak cheerless light as cold as moonlight, and by February that golden globe in the sky isn't much better, too weak to defrost an icicle. Finally things begin to look up in March. Even with temperatures hovering in the teens, the sun takes on the characteristics of a good kindergarten teacher, preparing the ground for spring growth, waking up the pussy willows, luring snowdrops into bloom and convincing masses of scilla to paint the landscape in a sea of blue.

Mother Nature and her sun perform all these miracles. Even those drab little gray birds that argue with each other at the thistle feeder all winter are magically turning back into goldfinches. I don't see how they manage that, do you? Are their feathers getting a sort of sunburn as spring returns, the way we humans get a tan as we work outside?

By summer the sun is not so benign. It can blister and shrivel anything it sets its eye on. Unprotected plants wither as it sucks moisture from their leaves and dries out the soil around their roots. In autumn the sun loses its power quickly, but because the earth has absorbed its heat for many months, it takes a suprising amount of time to lose it.

The sun is as vital an ingredient in making a garden as thread is in sewing a slipcover. Whether you're growing perennials, annuals, vegetables, shade-loving wildflowers or heat-loving cacti, you need sunlight. When you start planning next year's gardens, think about how and where and when the sun's rays will fall. Trees and shrubs that are too close on either the east or west side of a garden will create much longer shadows than those on the north or south.

The closer land is to the equator, the more vertical will be the light falling on the land. In the tropics where the sun shines down from directly overhead and vanishes in seconds at the end of the day, its light offers a dazzling brightness. It is often so brilliant that it destroys colors, turning the sky white and plants into mere black silhouettes. Such vertical sunlight creates small dark pools of shade beneath trees and shrubs, and highlights all perpendicular surfaces, sparkles the waves on water and accents the shadowed crevices in stone walls.

Our summer sunlight in New England comes from closer to the horizon, offering a more angled light. Even on June 21st, when the sun reaches its highest point in crossing the sky, its angle over New England is nowhere near 90 degrees. It's only about 45. As the sun reaches the equinox, its angle is even more acute, and by the winter solstice, a mere sliver. The shadows of our locust trees stretch all the way across the sheep pasture as we head into winter.

Before planting a landscape, it makes sense to think about the affects of sunlight and shadow on the area. When the air is moist, the sun gives a soft, filtering light which picks out the details and colors of plants. It creates patterns of foliage and slowly lengthening shadows as evening falls, and offers backlighting as it moves across the sky.

Sunlight can make an area warm and cheerful or dry and withering. It will turn the water in a birdbath silver or black, put diamond sparkles into the ripples of moving water. Lack of sunshine can mean a cool retreat or a dark cold corner. Having a sheltered spot which stays shady through the hot summer is as important as having one that is protected from wind and receives sunlight all winter. I wish I had a warm protected spot like that to cheer up the months ahead. Alas, the winter wind usually blows wickedly on Locust Hill. 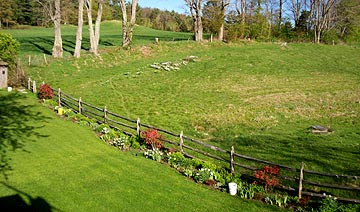 Dear me! I didn't mean to write such a cheerless column. I wouldn't dream of moving to a warmer climate. I love the changing seasons and the infinite variety of New England's weather. The January thaw is such a treat, and seeing the soft pink of quince, one of the first harbingers of April. I don’t mind the August heat when the sweat runs into my eyes as I work in the garden, and of course who couldn’t love the fantastic display of colors as Autumn turns the leaves and gives us that little reprieve of Indian Summer. I even like the purity of a blanket of snow covering the earth when I curl up with the latest seed catalogs.

Lots of good things happen in New England, don’t they?
Posted by Weeds and Wisdom at 1:43 PM