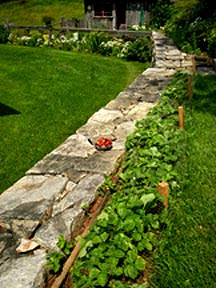 I like strawberry jam the way rabbits like lettuce, but I never thought of growing my own berries any more than a bunny contemplates putting in a vegetable garden.  For many years I got my strawberries from the local produce auction. Once the auctioneer had sold all the fat fancy berries with fat fancy prices and would get down to the ones he called “small and mean” I would start bidding.  To me they were “sweet and cheap” and made by far the best jam.

Garden books claim strawberry plants are short-lived, lasting only three or four years, and that the first year you should pick all the blossoms before they produce fruit, and cut off all the runners so that the second year there will be a good crop.  That sounds like a lot of work for very little return, doesn’t it?

The year of our oldest daughter’s garden wedding, however,  I decided to plant strawberries at the top of the retaining wall in the newly landscaped backyard as a decoration. They were in full bloom on the wedding day, and because I hadn’t picked off the blossoms a few weeks later I was rewarded with a nice crop of berries.

I still believed all those tales about the difficulties of producing a good crop, but the job of cutting off runners was done by the lawnmower as most of them crept out to the grass just beyond the bed.  I also discovered that picking the ripe berries was a joy for someone with a bad back as the bed atop the retaining wall was just four feet high.

That bed was still producing berries ten years later as I replaced tired plants with those produced by runners I steered into the bed.  Each fall I covered the bed with pine needles, a mulch that supposedly enhances the flavor of the berries. I always got enough to enhance my morning cereal, and 5 or 6 jars of jam, but  by then I had a flourishing raspberries bed which makes jam almost as good.

But the real reason I gave up raising strawberries was that after a few years the chipmunks were enjoying more berries than I was. These adorable critters are not very cute when they take a large bite out of any berry that blushes.  I had such a chomping of chipmunks that almost every morning during the strawberry season my Hav-a-Heart trap held a chattering chipmunk.  I always released them up at the cemetery, far from Locust Hill.  But eventually I lost heart and gave up the strawberry bed.

I was inspired to try again after I acquired Gottoo, a Basenji, very fleet of foot, who chases my cat at any opportunity. I thought she might keep the chipmunks at bay, but it didn’t work.  Eventually I put netting over the bed, a very tedious job and not pretty looking either.  This year I’m planning to let the chipmunks enjoy those blushing berries, and just make jam from raspberries and jelly from the elderberries blooming in the sheep pasture.

Don’t let this tale discourage you from trying to raise these delicious fruits. Despite all the warnings in the garden books, they are easy to grow, provided you don’t have a family of chipmunks in your back yard.