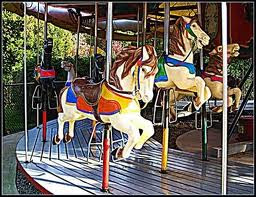 I’ve just spent another day on what I call the Garden Merry-Go-Round.  It happens every spring when there’s so much to get done that I find myself jumping from one horse to another, so to speak. I leave one project to fetch a trowel and get waylaid by another needier project.

I started by tackling the perennial border which I’d been mulling over all winter,  having decided it was time to make this 100 foot long bed easier to take care of in my old age.  I have already discovered that I’ve made myself a ton of work to accomplish this plan.  Just getting rid of three quince bushes that not only required the prickly job of pruning twice a summer, but were constantly sending up new shoots, sometimes as far away from their mother as a couple of yards, turned into a major job.

The other part of the plan to ease my old age involved removing certain plants that continually self-seeds in the wrong places. Phlox, Lady’s Mantle and  sprawls of black-eyed Susans were all growing in undesirable places. I’d already placed a bucket of compost every ten feet or so, waiting to be turned into the soil as I removed these unwanted plants.

Making the bed less work had turned into a lot of hard work, but since I always enjoy killing two mosquitoes with one slap (much nicer than killing two birds with one stone) my garden cart was ready with a pile of empty pots which I plan to fill with  the plants I dig up to donate to the Douglas Library in Canaan for their  plant sale.  It’s this Saturday, the 19th from 10 to 3, the reason this column is early.  Besides plants they will have books and baked goods for sale. 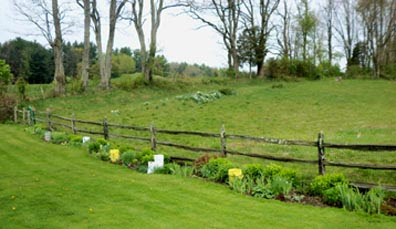 I’d filled almost a dozen pots with my  plants when I realized I should get the camera and a much-needed pair of garden gloves.  Since it was on the way, I took a buckets of weeds with me to the compost pile and got waylaid by the sight of the rugs I’d spread last fall to smother a carpet of weeds.  It was time to find out if this idea worked, but before I rolled up the rugs I took some pictures.

It really did work, didn’t it?  But all that clear space… I couldn’t think about how fast it would turn back into weeds, so I returned to my border job.

By the time I’d  filled a few more pots with the  plants I’d dug up,  my back told me I should quit, but then I remembered another job that would be relatively easy, cutting the dripping vines of ivy that cover the Abitta’ garden's  stone wall, a nice stand-up job.  It looks so much prettier when you can see the wall,  doesn’t it? 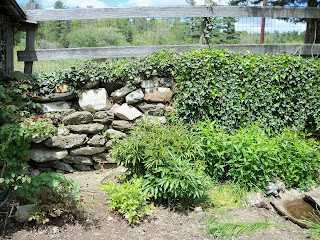 As I took a bucket of ivy cuttings to the compost bin, I saw another job that needed doing.  This is always what happens on the Merry-Go-Round. But taking photos of everything is making this an easy column. Have you noticed the incredible amount of fungi that has sprouted on all outdoor wooden surfaces? My fences are covered with little red-capped moss and other scaly fungi. 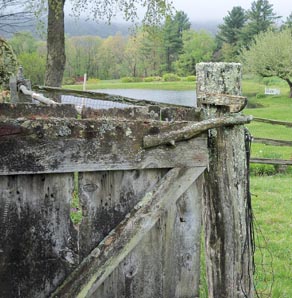 After I took a photo of the gate, I got the paint scraper and tackled the fungi problem.  Boring.  I put the scraper away and suddenly realized I hadn’t even planted my peas, something I usually do in April.  Ah, that allowed me to kill two more mosquitoes. Where my pea vines climb the fence there were a dozen forget-me-nots that could go to the Douglas Library.

Once I’d filled more pots with the forget-me-nots, I planted the peas, raked half the vegetable garden and got out string and stakes so I could put in a row of carrots and one of onions and another of bush beans.  By then, thank heaven, it was lunch time.  A restful hour reading the Wall Street Journal while I ate.

I’m afraid you haven’t learned a thing from me today other than how hard I’ve been working.  This happens often, and now I know why.  Today’s  WSJ had an article which claims that talking about yourself activates the same pleasure zone in the brain as eating good food and receiving money!  Living alone, I rarely get to talk to people, so obviously I am often tempted to talk about myself through my columns.

I hope you’ve been on your own Garden Merry-Go-Round and reveling in the end of Winter.  But do take time out to visit the Douglas Library’s sale.

Posted by Weeds and Wisdom at 8:39 AM