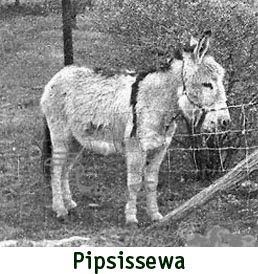 When Hank and I were first married we lived in a little cottage on his family’s farm in . The woodland on the property was rich in wildflowers, and thanks to Hank’s mom,  I became a wildflower enthusiast and eventually gave garden club programs on the subject.  Since in those days no one disapproved of digging up wildflowers, and I had the perfect spot to put in a wild garden, I began to transplant many of these treasures.

Hank also enjoyed wildflowers, but after a few years he got a little fed up with being a beast of burden, lugging home clumps of columbine and hepaticas and sometimes even mossy logs or large rocks covered in lichen. On our third wedding anniversary he arrived home leading a burro, and announced that as we had one jackass in the family already, we might as well have two.

I naturally assumed he was referring to himself, only to discover he’d brought home a Jenny, a female burro, not a Jack.  Pippy, or Pipsissewa, as she was appropriately named, became a permanent member of the family and carried home wildflowers, ferns, rocks, and sometimes all three children. When she died, however, we had no luck finding a replacement until I wrote a column about the problem and promptly heard from a reader happy to sell me her burro.

I don’t need a new burro, but I’m hoping that this solution will prove to work for sheep. I’ve just had to put down two of my very elderly ewes, both too old and crippled and toothless to survive.  My two remaining old ladies just can’t keep up with Locust Hill’s large sheep pastures, which I can picture quickly going to brush.  With no desire to get a new ram or a young ewe and start raising lambs again, I’m hoping one of my readers knows of someone who’d like to board a sheep or two in my pastures for free, or sell me a nice old ewe for cheap. 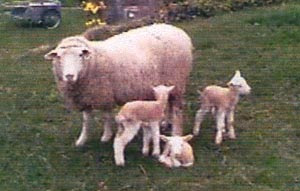 Lambs are adorable, but rams are ornery.  Over the years we had a total of six.  Although their primary function was to make sure all their wives got pregnant, they were also expected to keep the grass on the pond’s dam trimmed, and all were referred to as the dam ram.  If you think lawn mowers are temperamental, you should try a dam ram.  Our first ram was loaned to us by a neighboring sheep farmer.  We named him Rammit, as he would charge anything that moved, from dogs and children to chickens and bumblebees.

It took Rammit only a few days to mow a section of the dam, but moving his stake to a new spot was a challenge.  Putting a bucket of grain at the outmost reach of both the old and new tether areas, I could, if I was quick,  pound his stake in its new spot before he finished his treat and knocked over his bucket and me!

After several years of coping with Rammit, we decided to buy our own ram,  and were delighted when we found a really docile one named Beaver.  We planned to change his moniker, but the first day this new dam ram fell into the pond and nearly drowned.  The kids spotted him floundering in the shallow water, his wet wool weighing him down, and when we pulled him out we all agreed to keep his original name.

Beaver was a well-endowed ram, so spectacularly equipped that if he wasn’t careful he’d step on his own equipment.  Consequently he stood around looking sheepish and never charged or butted anyone.  His progeny were a sickly lot, however.

That summer when the mother of a male lamb sired by Rammit the previous year up and died,  our eight-year-old, Bridget, volunteered to be the orphan’s mother.  She named him Zinnia, bottled and babied him and begged us to never turn him into lamb chops, so we only docked his tail, and let him replace Beaver when he was old enough.

The only trouble was that Zinnia thought he was a people, not a sheep. Instead of charging lustily after his new wives when it came time for his marital duties to begin,  he stood at the pasture gate all day blatting for Bridget.

We never did spot any sexual activity, but unless you believe in Immaculate Conception, Zinnia must have done his job, as there was the proper complement of lambs each spring.  I have lots more sheep stories, but I think I’ll save them for another column.  In the meantime, hopefully I’ll hear from someone who’d take up my offer of free pasture.

Posted by Weeds and Wisdom at 1:00 PM