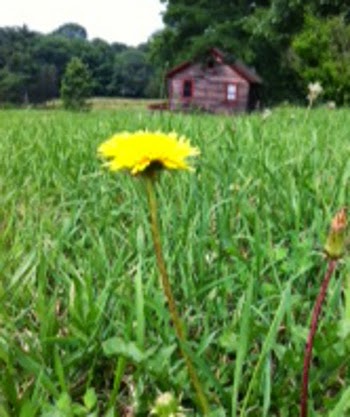 Such an invasion of dandelions we had this spring! I assumed I'd have no trouble finding one to put in today's column, but I searched all week and that wimpy little one is the only dandelion still sporting a shaggy yellow head. All the others I saw had turned to fluff and were happily spreading their ripe seeds everywhere.

There’s nothing dandy about a dandelion. Their  motto is “Never say die.” as everyone knows who has tried to get rid of them.  Dig as deep  as your shovel will go, loosen the soil and pull the plant with the utmost care, but I can guarantee  you’ll leave behind the last bit of the root, and that’s all a dandelion needs to produce a new plant.

This clever weed has what are called “contractile” cells living on its meristem that form the weak link, ensuring that the last bit of root will be left behind if the plant is pulled up. The cells living just below the break are called  “parenchyma” cells. They are so versatile they can divide to form any sort of plant tissue –  xylem, epidermis, phloem, etc.  (Good thing I took a botany  course once!)  The same sort of cells exist in the tail of a lizard. so he can grow a new tail.  The dandelion grows a new head.

When these cells realize there is no longer a plant above their heads, they quickly produce dozens of new buds.  The tag end of the root also does a bit of growing so it can support those new buds, and before you know it a cluster of young plants has popped up in place of the one you thought you’d gotten rid of.

The dandelion’s  flower is actually composed of as many as 20 individual florets containing all the  parts needed to produce a seed.  Supposedly  if each tiny seed were to germinate, the earth  would be knee-deep in this hardy composite.

Let’s face it, there will always be dandelions, so we might as well use them.  Their leaves can be  cooked  as greens or added to a salad.  Their roots can be turned into a substitute for coffee, although like most wild edible,  it doesn't compare to the real thing.  You really need to be pretty thirsty to enjoy a cup.

Dandelion wine, like dandelion coffee, is complicated to make, as the recipe requires you to pick four quarts of those yellow flowers and remove their bitter green leaves,  but the wine they produce is both palatable and potent.  My friend Edna Ford made a batch every spring, and I still remember the first time she offered me a glass.

Dandelion wine looks  as clear and tastes as dry as a good commercial white wine,  I was under the impression that it was  a  little old lady’s drink, its alcoholic content inconsequential.  Edna and I sipped two small glasses apiece and much to my surprise, it turned out to be twice so strong that I was in such a fine state of inebriation that I was unable to drive home.

Yesterday I suddenly remember how many dandelions had blossomed in my asparagus bed in May, and thought I'd get my camera and  go see if  I could find a bigger better blooming specimen.   I didn’t find a single one. What I did find, right nexty door in the raspberry bed, is pictured below. 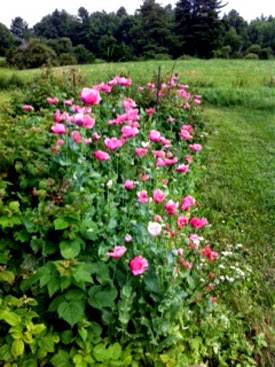 These are annual poppies.  They appear on Locust Hill every summer. Sometimes when their tiny black seeds are ripe in September I open their pods and sprinkle them here and there, but I’ve never put them up in the raspberry bed.  Aren’t they beautiful!