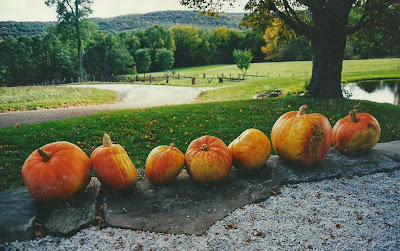 I  haven't raised pumpkins since 1995, the last year there were grandchiuldren living nearby who wanted to carve fancy Jack o' Lanterns.  That row of pumpkins above provided Reed and Ely with so many choices they didn’t even argue about who got which.

Back in the Middle Ages the date Oct 31st was not Halloween, it was referred to as New Year’s Eve. The druids (I had to look that up to discover druids were priests) celebrated the date by throwing a few black cats onto their bonfire to placate the witches in the area. Eventually New Year’s Eve was changed to All Hallow’s Eve, and the towns folk got into the act, dressing up as saints and devils, and dancing in the street.

In America  October 31st was called “Mischief Night” when ghosts roamed the countryside curdling milk and tipping over outhouses.  By the time I was a kid  the date had become Halloween.  It involved candy apples, popcorn and “witches’ teeth,”  and if folks weren’t sensible enough to stay home to hand out such treats, they’d be greeted with soaped windows, and strewn toilet paper on their return.

By the time my kids were old enough to  trick or treat,  it was Mars Bars and Milky Ways or  windows sprayed with shaving cream and more strewn toilet paper.  The costumes I made my three girls were considered old-fashioned by their friends who paraded around in store-bought Richard Nixon masks and authentic looking space suits and goblin garb. Fortunately  candy stuffed with razor blades and drugs were still a few years away.

Tricks and treats and costumes may change with the generations over the years, but one part of Halloween has been around for centuries, the jack-o-lantern.  In Ireland where these carvings originated, they were made from large turnips or rutabagas, but in this country they have always been carved on fat orange pumpkins. 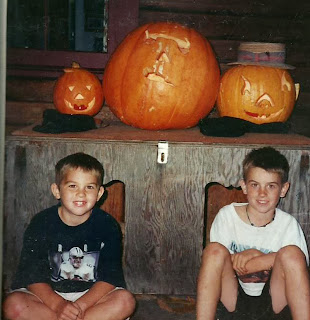 Having priced a few pumpkin at various farm stands this week,  I suspect quite a few gardeners who have children will grow some themselves next summer, so here are a few suggestions.  Pumpkin vines  take up a lot of room so I plant mine out by the manure pile instead of in the vegetable  garden.  Pumpkins do not like to be transplanted, so they should be started where they will grow.  To get a head start, plant the seeds in a sod.  Dig up a shovelful of grass from a field, turn it upside down and plant some seeds in it  indoor in March. 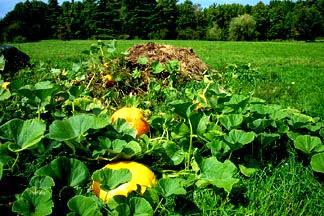 Since I now have a great grandson who visits Locust Hill each August, I may grow a few pumpkins next summer myself, and  personalize them for Twain. When a pumpkin is still young, you can take a carrot peeler and gouge out a child’s name or initials with the tip.  As the pumpkin grows these cuts heal over and the name will be branded in the pumpkin’s flesh.

Have a happy Holloween, and remember, if you bring jack o’ lanterns in the house, the warm temperatures will make them rot in a hurry.  Left outside they’ll last much longer.
Posted by Weeds and Wisdom at 8:37 AM