Oh, dear, what shall I write about this week? Having written columns on just about every garden subject over the past thirty years, it's hard to come up with something I haven't already covered. Flipping through my files yesterday, however, I came upon one labeled "Column Ideas" and when I opened it, the first article I found was titled "A Plague of Gypsy Moths." Since my last column mentioned the area on Locust Hill we call the Gypsy Cut, I'm hoping you might find their life cycle interesting.

The gypsy moth arrived in our country in 1868 when Leopold Tronvelot, a naturalist living in Massachusetts, let a cluster of their eggs he'd brought home from France fall out an open window.  An egg cluster can contain up to 1000 eggs, and when the eggs hatched into tiny larvae no bigger than mosquitoes, the plague began. These little innocents just spin long strands of silk in trees until they molt, but then they become the hairy hungry leaf-consuming caterpillars. 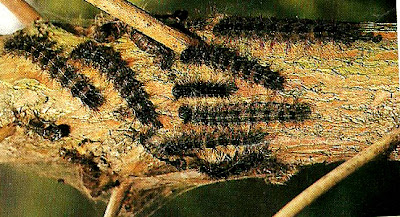 By July they are fat and full of green leaves and transform into pupae.  Some are males, some females, and when a pair gets together, the result is a gypsy moth, ready to start the cycle again when the female lays a new batch of eggs. It wasn't until 1974, 105 years after Mr.  Tronvelot  spilled the eggs, that both state and federal governments started pouring money into control programs.  Sad to say, that was not in time to save the beautiful stand of oaks on Locust Hill.

Heard enough about gypsy moths? My idea file fortunately had several other articles on invertebrates, which by the way, means having no spinal column.  One that is far more appealing than the gypsy moth, is the Daddy Longlegs. He is a predator with olfactory organs in some of his eight legs that help him smell nearby prey.  Those legs are designed to release a squirt of foul-smelling substance to repel  enemies.  If that doesn't work he can shed a leg if it is seized by an enemy, who is then left holding this useless appendage while Daddy escapes.

Ever heard of burying beetles? This genus, Necrophorus, which means "corpse bearer" in Greek, contains nature's grave diggers. They're anything but funereal looking, having bright orange spots on their black bodies. These beetles are able to detect the faintest smell of death, even before the body of a bird or small animal has cooled. If one of these colorful grave diggers discovers a corpse, he sets to work making a hole right under the carcass, or if the soil is too hard, shifts it to a softer spot. Soon other funeral helpers  arrive and join in the work until the deceased is totally buried. 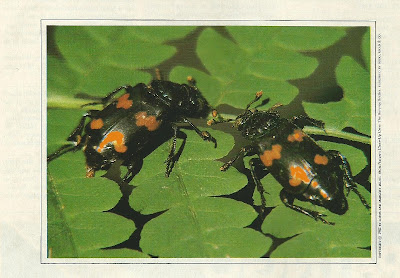 OK, just one more invertebrate, a weird looking insect with big bug-eyes, the praying mantis.Unlike her close relations - grasshoppers, cockroaches, crickets and walking sticks, who are all benign vegetarians, the mantis is a predator, and on top of that, a cannibal. She's not praying, she's preying, searching for the next meal. Like all insects, she has six legs., the back four used for walking, the front two , lined with razor-sharp spines and ready to seize her next meal, function  functioning like a swimmer doing the crawl.

Those bulging eyes of hers are always on the lookout for the next meal - moths, beetles, flies, even hornets and bumblebees. She doesn't bother to kill them, just happily eats them live.  Imagine being a hapless ladybug seeing this ogre ready to grasp you in her arms and knowing she will eat you up as if you're a
nice tasty ear of corn. 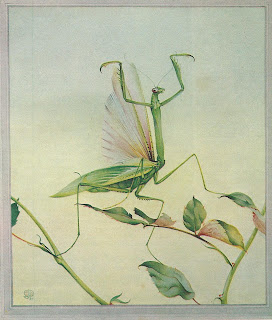 What's even scarier is what Mrs. Mantis does when it's mating time at the end of August.  Mr. Mantis clasps his bride in an embrace that can last five hours.  But when they're done, instead of scuttling away, he hangs around, so the Cannibal Queen, as the naturalists have nicknamed her, gobbles him up.

Surprising as it might seem, this vicious female cannibal is terrified of ants.  She must have a good memory because it is only when a mantis is a nymph, a tiny newborn just out of the egg, that ants are a hazard.  They swarm around the egg case, devouring the babies as they wiggle out from the mass of foam that is their nest.

How or why these nymphs retain this frightening experience through all their life cycles is a mystery, but even a hungry full-grown mantis will not try and catch an ant to eat.  In fact mantises will actually turn and flee in the other direction.

I think we've all learned enough about the invertebrates,  don't you? But now you may at least have more fun knowing who is who when you meet up with one in your garden next summer.

Posted by Weeds and Wisdom at 8:59 AM