I think Weeds and Wisdom has been so rampant with weeds lately that there’s not been a bit of wisdom.  But I’m  in good company - my favorite newspaper, the Wall Street Journal, had an article on weeds just last week.

I’m sure you’re all as sick of this subject as I am, so let’s take a nice wildflower walk today. Fall is such a peaceful time in the woods, and so many of the wildflowers that have rather inconspicuous spring flowers are full of colorful berries.  I thought we’d head up to the Falcon Forest, an area we named in honor of the old Ford Falcon we  dragged up there when it stopped running so that future grandsons could play race car driver in it. 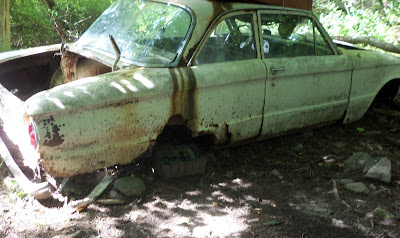 .
It’s quite a trek, and having not been  here in many years I was amazed  to see how it’s changed. The pines are now so tall there’s hardly any sun and  not a single wildflower to be found, just a few patches of emerald moss. We should have better luck if we head over to the Dead Horse Field which is close by.

Yes, we actually found the skeleton of a horse in this field the first year we lived on Locust Hill, but never solved the mystery of who had owned the horse or why it had died.  We won’t find old bones today,  just wildflowers, hopefully two  closely related ones, the red and white baneberries.

In the spring these comparatively tall stalks, sometimes two feet high, are hard to tell apart. Their  blooms are so similar,  delicate clusters of white flowers called  terminal racemes. But now it’s easy. The red baneberry obviously has red berries, while the white has white with a black dot in the center of each, so they're known as Doll's Eyes. 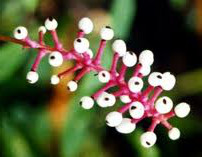 Children love these funny little berries,  but make sure they don’t try and eat them as they’re poisonous.

The section of woodland that borders this field we call the Gypsy Cut, named for the wretched gypsy moths that stripped the leaves of every oak in this area  way back in the 1960s. We should be able to find  a wildflower here that we call blue  beads,  a highly appropriate name at this time of year, as its small yellow flowers have turned into conspicuous blue berries. 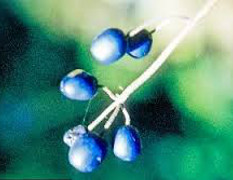 Its formal name, Clintonia, might appear to be inappropriate.  Why give DeWitt Clinton,  a governor of  New York, this honor?  Well,  Mr. Clinton was also an avid naturalist.  According to Neltje Blanchan, one of my favorite wildflower authors, who explains  “were  it not for this plant keeping his memory green, we should be in danger of forgetting the weary, overworked governor, fleeing from care to the woods and fields; pursuing  the study which above all others delighted and refreshed him.”

Miss Blanchan wrote close to a dozen books on wildflowers and birds.  They are full of not only scientific facts, but charming poetic comments, making them a delight to read compared to the factual books limited to nothing but scientific  information.

Oh, what luck!  Here is a beautiful patch of one of my favorite wildflowers,  the partridge berry.  Look at all those bright red berries!  In the spring it has tiny white blooms, always born in pairs at the end of each vine-like stem.  The result is that each pair produces a single red berry.

You know how an apple has a stem at one end and opposite is the calyx, the remains of the blossom?   If you look carefully at a partridge berry you’ll find two calyxes, the remains of the two blossoms that joined to make a single berry.  You can clearly see the two caylixes on one berry. 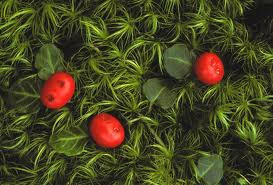 As we head home we can probably find one more wildflower with conspicuous berries, the bunchberry, a miniature copycat of the dogwood tree, Cornus florida.   Its Latin name, Cornus Canadensis, hints at the relationship.  Its flowers have the same four notched white bracts surrounding the true flowers and the same cluster of red berries.  Yes, they're bunched berries, but  I call this plant  the little dogwood. 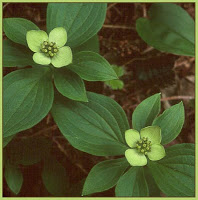 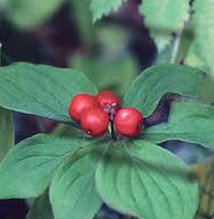 There are many more wildflowers with  berries at this time of year, but we’re almost home and it’s lunchtime.  This was much more fun than weeding though,  wasn’t it?
Posted by Weeds and Wisdom at 11:08 AM