A Summer of Difficulties 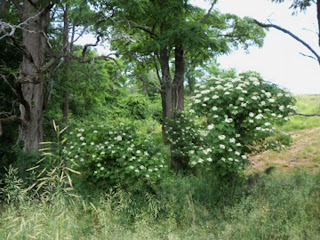 Don't those elderberry blossoms look lovely?  But what followed were berries so small and dry there was no hope of making a batch of elderberry  jelly. My red raspberry bushes were equally pathetic, producing so few berries there were hardly enough to put on my cereal, much less make a dozen jars of raspberry jam. And my Fall Gold  raspberries that normally are not ready to pick until late September, came and went in early August. All these failures are painful for someone who loves homemade jam and jelly. I hope you've had a more fruitful summer than I've had here on Locust Hill.


Another disappointment was feverfew, one of my favorite flowers, a most reliable little daisy which usually blooms for weeks.  But this summer its blossoms turned an ugly brown  in a matter of days.  When I mentioned this to a good garden friend, she claimed her feverfew had done the same thing.  Are we gardeners all having this problem? I've cut mine all off, so you can't see how unattractive they were.

Because of the moles that had filled the vegetable garden with tunnels, I didn’t plant anything until I’d gotten rid of them by adding pounds of lime to the soil.  It worked, killing the grubs that moles adore, so these varmints got discouraged and left. Unfortunately many of my vegetables don't care for all that lime any more than the moles did. I asked the Ag department could I mix something like pine needles in the soil, but I've had no reply..

My bean seedlings, which have always produced enough string beans to freeze,  mysteriously wilted and died without producing a single bean.  My cucumber vines have been just sitting, loaded with tiny cukes no bigger than my little finger.  They're still that small so I circled them for you to see. 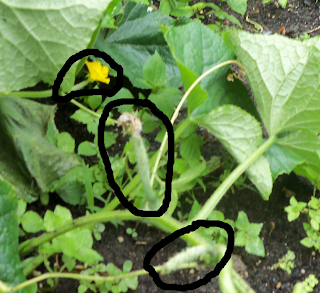 My pepper plants are enormous, but the peppers are no bigger than pingpong balls.  Carrots, lettuce, onions and tomatoes are thriving however,  and believe it or not, the peas, their seeds planted in mid-June, are doing so well I've snacked on sweet raw peas every day. 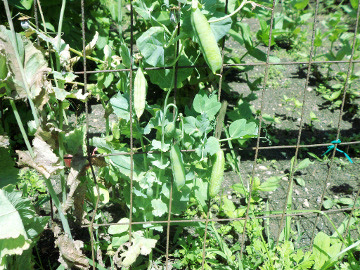 Another nasty problem has been crab grass.  Unlike most weeds that come up easily when pulled,  crab grass requires a trowel to release its roots.  And they're not just in the vegetable garden.  They're sprouting in every flower bed as well. Are the weeds in your gardens as prolific this summer as mine? I love weeding, but I can't keep up with it when they're everywhere I look.  The bank of flowering shrubs is being choked by bindweed, a nasty relation of the morning glory.    I couldn't even identify one of the shrubs on the bank until I ripped off all those vines wrapped around it and found a nice little lilac bush that had been strangled.

Even my animals are causing me grief.  Intrepid, one of my new ewes, kept getting out of the lower pasture even though all the fences seemed to be in good shape.  It took several weeks to discover her escape route, a gate lose enough to wiggle under, now fixed.  My other new ewe, Valiant,, is a delight, very well behaved.  But the Ford cows, who all escaped from their pasture one rainy day last week just about did me in.  Did you know that cows can be racist?

I woke up that morning to see seven fat black heifers in the big meadow, having discovered a poorly shut pasture gate.  When I got downstairs and looked out the front window I saw eight more heifers, all brown,  in the front meadow heading down to visit the neighbors.  Imagine that - Racist cows! It was raining too hard to get a photo, but the Ford boys finally got all those prejudiced  beasts  back in their pasture.  No real harm was done unless some of them were the culprits who knocked down the apple tree’s biggest limb, the one that supported great grandfather’s beautiful swing. 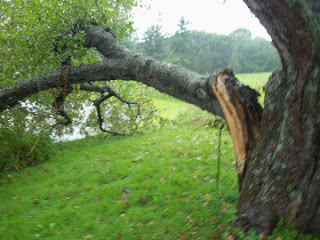 My apologies for offering you such a negative column.   I guess I should stop complaining and end with a few cheerful notes. The limb of the apple tree has been sawed up and stacked for next winter’s wood stove.    The dogwood tree I  planted at least nine years ago, has never bloomed, so this spring I decided to give it a dose of “Spray N' Grow,” that miracle vitamin concoction I once wrote a column about.  I sprayed the the tree heavily, but couldn't reach the highest branches. You can see in the photo that all the lower branches are white with blossoms, but the ones I couldn't reach haven't got a single bloom.  If you'd like to try this great spray, just Google "Spray N' Grow" to order a bottle. 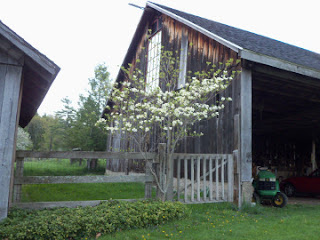 The reason this column is being published today is because the Norfolk Library’s Gala weekend starts on Friday night 6 to 8, with a special celebration for children. There'l be a magic show, face painting, a cake decorating contest, and much more, including beautiful children's books for sale  to celebrate the 25th Anniversary of Eileen Fitzgibbon's Programs for children.

Another great Auction will be held on Saturday night, 6 to 8.  As usual, there'll be wine and  delicious hors d'oeurves, and all sorts of exciting items to bid on,- a dinner for 12 followed by bridge, tennis lessons or golf lessons, even a week's stay in France!  And on Sunday the Annual Book Sale will start at 10 am.  There will be the standard  23 categories - Art, History, Cooking, Gardening, Social Science -  too many to name,  thousands of books priced at almost give-away prices.     Hope I'll see you there. 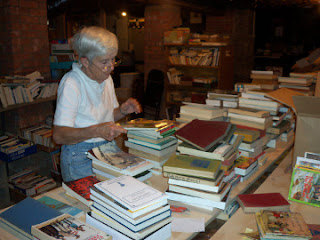 Posted by Weeds and Wisdom at 7:11 AM