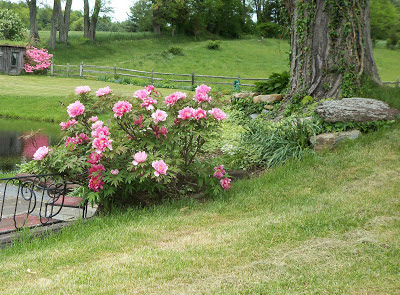 When I was first married I was so ignorant about gardening  that when a neighbor brought me a huge bouquet of peonies I didn’t even  know what they were. I remember being amazed by their beauty, their sweet smell, and the fact that they seemed to last for weeks. My neighbor told me that peonies were immortal.

I still feel that way about peonies, but especially tree peonies which unlike the perennials, stand up beautifully without staking. Several years after we moved to Locust Hill Hank’s Mom gave me a tree peony with luscious pink blooms.  I didn’t know where to plant it as major landscaping plans were still on hold.  The one area not threatened by future bulldozers and changed topography was the front yard.

We’d finished building a retaining wall with a raised terrace, and leveled and seeded the area just beyond it, as our first lawn.  Where the retaining wall turned sharply at the edge of the road, it formed a V that couldn’t be mowed and seemed like the perfect spot for my new tree peony.  I planted it there, with nary a thought of what would happen come winter.

As the town plow roared by after each snowstorm (and in those days there were dozens every winter), it buried my tree peony with snow, gravel and enough salt to raise its blood pressure to heart attack levels.  When the mountain of snow finally melted around the first of May, I clawed out the debris of pebbles and broken branches from the V, murmuring apologies to the peony.

I had little hope that the bedraggled plant would survive, but no, in June it actually blossomed. My neighbor had been absolutely correct - peonies are immortal.  Within three years it had so many blooms I had to count them – 23!  What a survivor, especially when you hear what we did to it next.

The retaining wall of the terrace had begun to collapse, and since we’d decided to enlarge the terrace, the long-suffering tree peony had to be moved.  I knew where I wanted to replant it, but there was a major problem.  I guess this will sound crazy, but the fact was that the bulldozer could only get to the peony from the south, and could only replant it in the new location from the north.  Was my poor brave peony immortal enough to survive this total reversal of its environment?

Yes, the photo at the top of this column is that tree peony, its body all turned around to face south instead of north.  It’s the same one Hank’s mother bought for me in 1964 so it will be 50 years old next spring.  Lots of people think a tree peony is a tree, but as you can see,  it remains a low-growing shrub.  I think instead of calling it a tree peony, we should rename it an Immortal Peony.

The white tree Immortal peony below that daughter Trum gave me several years ago has had an easy life, holding up this last week through two days of heavy rain.   If you've always thought a tree peony turned into a tree, now you know, it's an Immortal. 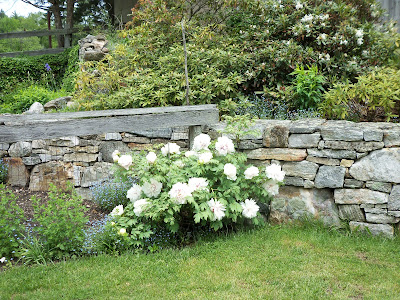