When I have a garden problem that I can’t find a good organic way to solve it, I am willing to try solutions that might shock a fanatic organic gardener. That is the reason I’ve not written this column before. The photo above clearly illustrates the problem I had. It shows the asparagus bed on Locust Hill which had turned into a bed of quack grass by 2010.

An asparagus bed can live for at least 100 years or more.  For 45 years our bed produced spears each spring to not only be enjoyed almost nightly with dinner each spring, but also provided a nice supply to  freeze for winter eating.

The bed was surrounded by a hay field, and despite sprinkling lots of salt on it to keep down the weeds  (asparagus likes salt), and mulching with grass cuttings from the lawns, we couldn’t seem to get rid of the quack grass, a menace whose roots can easily tunnel four or five feet and send up new plants all along the way.

It takes many years to establish a successful asparagus bed.  I think we harvested our first crop five years after making the bed on Locust Hill.  If I attempted such a project at my age I’d probably be dead before I ever got to eat a single spear, so what was I to do?

I queried garden experts on the web, Googled “quack grass,”  called the Agriculture Department, all with no success.  Only when I took that quack grass photo to the guys who sell Crossbow, the chemical we use to kill the multiflora roses in our cow pastures, was I offered a possible solution.

This is what they recommended.  “When you’ve cut the dead stalks of asparagus right to the ground this fall,  mow the bed close to the ground with the lawn mower, then spray the entire bed with Round-up.  Do this procedure again a week later.”

I was assured  that the effects of the Round-up would be long gone come spring when the first spears of asparagus pushed out of the ground.  So I had two choices.  Let the quack grass have my bed or try the Round-up solution.

So I bit the bullet and followed directions.  The following spring, 2011, there was very little quack grass and very little asparagus. Almost every day that summer I spent a few minutes, or sometimes as much as an hour, carefully digging up sickly quack grass, pulling gently until I got its entire root.  Every shovel of dirt I lifted included dead quack grass roots. 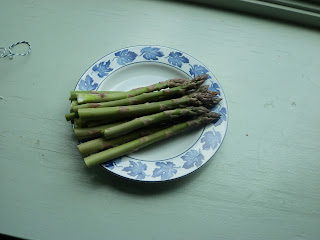 This spring I’ve been enjoying plenty of fat healthy asparagus from the bed almost every night. Only three of the new roots I’d planted have felt confident enough to send some very thin spears up into the world, but I’m not complaining.  There’s not a sign of quack grass to be seen.

To me, letting quack grass gobble up my asparagus bed would have been a tragedy, so I’m glad I’m not a fanatic organic gardener.