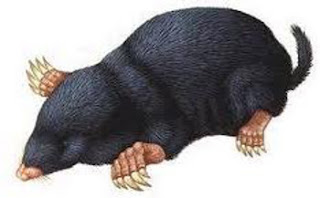 We gardeners seem to be facing one aggravation after another from spring right up until fall.  If it isn’t aphids it’s slugs.  If Mother Nature doesn’t drown us in rain, she gives us a drought.  If the gardens don’t get woodchucks they get  rabbits.  This year my first aggrevation was discovering that my vegetable garden was riddled with mole tunnels.

Many years ago when I was writing for the Lakeville Journal, I wrote a column about moles in which I described finding a nest of  squirming  newborn star-nose moles.  Have you ever seen these unattractive creatures?  I was so horrified I did them all in with my shovel. 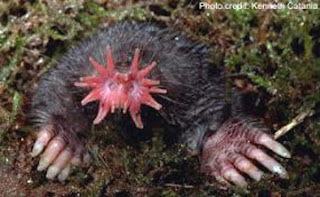 The following week there was a letter to the editor from a Miss Whittlesey, whose pen can be as vicious as my shovel.  I quote only her first sentence. “I am appalled that you could even print that horrid account by one Hatsy Taylor of how she murdered a perfectly innocent nest of infant star-nosed  moles!” In another letter to the paper this same lady called me a “rural skinhead” because I’d referred to a flock of turkeys as some of God’s stupidest creatures.

Critical letters to the editor make me shrivel in embarrassment. I am sure that lady is not a gardener or has ever had the experience of finding moles visiting her yard. Since there have been no more scathing criticisms from Mrs. W. since 1985, I’m hoping I will be quite safe in once again writing about moles.

In past years I’ve only coped with moles in the lawn or the perennial border, never in the vegetable garden.  Humps of pushed up grass in a beautiful lawn are unsightly, but the lawns on Locust Hill are not  beautiful.  They have as many weeds as grasses, so a few mole tunnels make little difference.

Moles who invade a flower bed are another story.  Most people think  these blind beggars are the culprits when last year’s tulips vanish, but moles are carnivores and have no interest in eating roots or bulbs. They like grubs.   Unfortunately their tunnels provide easy access for the mice, who are the culprits.  They are herbivores, and they especially love eating tulip bulbs.

Never before have I had moles in the vegetable garden. Last fall, as usual, I dumped four bucket loads of manure on the garden with the tractor, then  my yard man Steve  spread it and rototilled and I raked it as smooth as a diningroom table.  But this spring it resembled a bowl of spilled spaghetti, the humped up mole tunnels making a dizzying pattern, curling in every direction.

How I wish I’d thought to take a photo of this nightmare.  I should have known that if  I ever found a solution  I’d write a column about it.  I guess I was too upset to worry about photos, so you’ll just have to believe my description.

In some respects moles invading a vegetable garden can be beneficial, as they eat a variety of bad bugs.  Maybe so, but that’s no excuse for making that many tunnels.  There wasn’t a single uninvaded space in the garden.  How could I even think about planting my seeds and seedlings?  I stamped on most of the tunnels and raked the garden until it was once again smooth. Two days later it was riddled with new tunnels.

One certainly doesn’t use poison in a vegetable garden.  Traps rarely work, especially if you’re trying to catch 4 or 5 or who knows how many of these critters. Another suggestion  was to try drowning – put a hose into a tunnel and turn it on full blast.  That didn’t sound like a great idea. Just look at that mole.  Is he laughing at me? 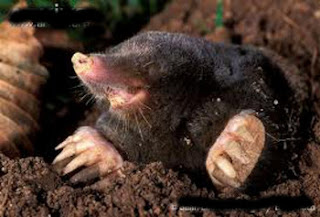 Finally a very knowledgeable gardening friend suggested I lime the garden.  Apparently with enough lime in the soil, grubs, the favorite food of moles, die and the moles move on to a better hunting ground.  So I bought two fifty pound bags of lime, punched a big hole in each one and walked up and down spilling out a beautiful white stream of lime.

I raked the lime in and I’m very happy to report that it worked.  When I didn’t see but one weak tunnel for the next three days, I hastened to begin planting.  By then it was almost June, a rather late start.

Once I’d raced to plant half the garden I was too exhausted to plant the other half.  As you can see, the pepper plants aren’t even moving, 2 out of 3 Brussels sprout seedlings don’t look as if they’ll survive,  but the poor pea vines are suffering the most.  I’m sure they don’t like the warm weather, and probably don’t like that much lime either. 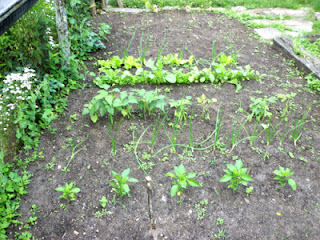 The other half of the garden now has half a dozen tomato plants, zucchinis and cucumbers  started, plus rows of flower seeds - zinnias,  cleome, and larkspur, which haven’t even appeared.

I see a few mole tunnels in the lawn, but so what.  I’m not complaining.
Posted by Weeds and Wisdom at 11:05 AM