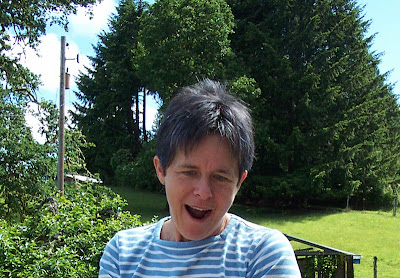 I love  getting emails from my readers.,  It’s the only way I know who’s out there  reading.  I’m always surprised how many of them are not gardeners.  Several people who read my column on garden  dividends wrote to say it has inspired them to try raising their own vegetables. Just imagine how satisfying that made me feel.
Those beginning gardeners  reminded me of the summer that my eldest daughter made her first vegetable garden. Trum has become a fantastic gardener, but back when she was first married, she knew next to nothing about raising vegetables.  All through that first winter she queried me about starting seedlings indoors -- what kind of potting soil to use, how much light to provide, how often to water, how to “harden off” the seedlings.
When spring  came she asked  me to pick the best location for the garden,  and since I  knew her back yard was way too shady, I suggested the nice sunny meadow across the street.   That land was owned by the power company, but Trum somehow managed to get  permission to use a small section of it for her garden.
I drove up on Memorial Day  weekend to help plant. Trum and Clem  had done all the hard work –rototilling, adding manure from a nearby farm, raking, fencing.. I was delighted to see that the soil was a good loose loam and amazingly free of stones for New England, but we soon discovered that the lack of stones was made up for by a multitude of nearly invisible  red ants who did everything they could to keep us from sitting while we planted.
When Trum began bringing out the flats of seedlings she’d raised in March, my mouth fell open.  Every vegetable she planned to have in her garden had been started indoors! Not just tomatoes and broccoli and onions, but peas, beans, even pumpkins.  With all the questions she’d asked and all the advice I’d given her, we had never once touched on which vegetables needed a head start.
The object of starting seeds indoors is to give them a longer growing season than they would get outside.  Vegetables such as tomatoes and melons need this early start, but vegetables that grow rapidly or tolerate cold weather or are difficult to transplant should all be planted directly in the garden.
The last thing I wanted was to dampen a budding gardener’s enthusiasm however, so we planted all the seedlings in what was quickly dubbed The Instant Garden.  Can you picture it?  We started in the morning with a plot of empty soil and at the end of the day we had eight full rows of greenery.
Knowledgeable gardeners just don’t get that kind of instant success, and in fact they don’t want it.  Obviously I should have spelled out what and why we give certain vegetables a head start.  I have no excuse except the fact that it was 1981, long before I began writing Weeds and Wisdom.
Trum’s bean seedlings had grown so fast indoors that they were about eight inches tall, but as sick and spindly as calves with the scours. Beans grow fast.  We should have tossed those poor seedlings out and planted new seeds right in the garden.
The two flats of carrot seedlings made a pretty row of lacey greens, but when Trum harvested them later on they were so crooked they could have been worn as bracelets.  The peas and spinach went into shock, reviving just in time to be wilted by hot weather. The tomatoes, broccoli and onions survived beautifully, but the pumpkins curled up and died.  Pumpkins should always be planted in their permanent home.
Unfortunately we took no photos of The Instant Garden,  but I found a picture of Trum which is probably how she'll look when she sees it at the top of this column.  Her first garden was not a roaring success, but we had a great many giggles planting it, and we both learned a lot, Trum about seedlings and me about beginning gardeners.

Posted by Weeds and Wisdom at 1:43 PM