How  I ache to be out in the garden instead of sitting at this computer.  Such a long cold winter! I’m looking out at my dreary dead-looking border buried in brown leaves with not even a daffodil in sight.

I wrote  this column a week ago when Spring had still not shown its warm sunny face,. I'm so happy I did, as  it's supposed to get up to a a blissful 65 degrees today, and I'm headed out to the garden instead of sitting at this computer.

Last year in March I read a book titled “Gardening for a Lifetime” by Sydney Edison, all about how to make your garden less work. Since I had reached the point where I knew I could no longer keep my 100 foot long border in shape I eagerly read Ms. Edison’s suggestions and then spent most of the summer renovating the border, a monumental project.

The book was full of wonderful ideas which I described in one of my columns, but because they are such sensible ideas,   they are worth repeating.  I suspect many of my readers no longer have unlimited energy and  probably have forgotten most of the things they read more than a year ago.

Since Ms. Edison’s first recommendation  “Get some help!” was not one I wanted to pursue, I turned to her second,  “Get rid of the plants that require constant work.”  That included  pruning, staking, dead-heading, self-seeding or spreading to unwanted places.  Well, I had plenty of plants that fit those categories.  I might not want to give up my delphiniums that always require staking, or my irises  which need dead-heading to look their best, but I had plenty of other misbehaving plants. 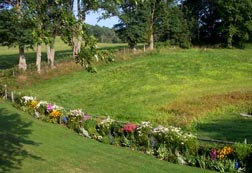 Phlox was the worst culprit. As you can see, its white or pink blossoms overpowered the August garden.  Because eliminating its stalks each fall requires a clipper, a tedious time-consuming job,  for many years I left them alone until spring when they could be easily broken off by the handful. That solution, however, meant newly self-seeded plants popping up in the wrong places the next April.

I soon discovered that digging up a
large, well-rooted clump of phlox
was exhausting, and there were at 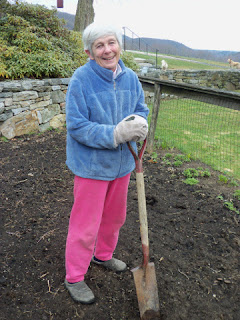 least a dozen or more in the border.
Fortunately I own a "Nurseryman's
Shovel”  which is hard to describe.
I was about to take a photo of it when daughter Bridget appeared.  Claiming
my readers would love my ridiculous pink work pants, she grabbed the camera and took this one.

That shovel is at least 50 years old, and its long 14 inch blade has the ability to lever almost anything out of the ground.  When I saw one of these marvelous shovels in the Tractor Store last year I bought it.  Unfortunately the first time I tried to pry lose a large stone with it, the blade bent right in two.  I took it back, and once I’d explained the purpose of its long blade and how useless it was if it couldn’t be used to lever something, the salesman agreed and gave me my money back.  A long story, but a necessary warning in case you decide to buy this type of shovel.

My old shovel is still working well, but what was I to do with all the phlox plants I’d dug up with it? None of my friends seemed to want them, but it turned out that the Douglas Library in Canaan was planning to have a plant sale in May. They were even offering to provide pots to anyone who would fill them with plants for the sale. What an incentive!  I spent the next two back-breaking weeks digging and lugging pots of phlox to the library, but it was a joy knowing they would find new homes.

Ms. Ellison’s book recommended replacing unwanted plants with flowering shrubs, especially those that would grow slowly and not need a lot of pruning.  Since by June the border was full of gaping holes, I realized it was time to go shrub shopping. What a shock!  For someone whose garden was chuck full of hand-me-downs and freebies, I couldn’t believe I would have to spend at least  $40 for each shrub I bought to fill a hole!

I am not some poverty-stricken old lady, but their price tags made me shudder. I went from nursery to nursery just looking.  Then one day I was thrilled to see a small shrub with a $25. tag on it! Then I saw it’s name – burning bush -  and my excitement vanished, knowing that I already had several of these shrubs in the border which I was planning to get rid of since they needed constant pruning.

I finally bit the bullet and bought about 6 or 7 shrubs - potentilla, azalea, laurel, hydrangea. By then it was late June and I was in such a hurry to get them planted in those empty holes that I didn’t spend a minute thinking about which color or shape or bloom time any of them had.  I just planted them in the holes, one after another.

This summer I plan to take my time and think about the aesthetics of the border – colors, textures, bloom time, all the aspects of a garden that were not in my head last year

I hope you’re enjoying this longed-for warm weather as much as I am.