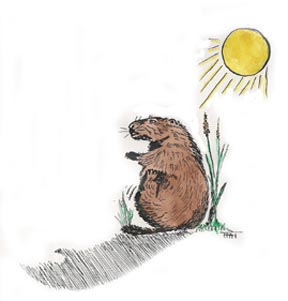 It's hard to think about gardening when the pond is skimmed with ice and the thermometer is hovering around 20 degrees?  At this time of year I usually slip in a column about animals, so how could I have miss the opportunity to write about woodchucks on Groundhog Day? After all, they like our gardens as much as we do. So here’s a belated column on the wily woodchuck.
Old Mother Westwind introduced me to roly-poly Johnny Chuck when I was a youngster.  I found him very appealing until my mother pointed out his real live cousin who was getting roly-poly eating fresh vegetables from our .  This fat fellow was so hated by my Mom that she kept a shotgun close at hand until she’d managed to do him in.

Finding a woodchuck living close enough to feast on your growing vegetables is as painful as realizing you’ve left your camera at home as you arrive in for a week’s vacation.  Having done the latter, I know how irritating it can be.

The fact that Mr. Woodchuck saw his shadow on Groundhog Day and promised six more weeks of winter is something we New Englanders could have told you. It may not be snowing, but you can bet there won’t be signs of spring until April. So what makes Americans think a ground hog that went to ground in October would suddenly wake up on February 2nd and maybe even dig his way through a pile of snow to check out the weather?

According to what I read, Ground Hog Day is also Candlemas on the Christian calendar, the day Christ entered the temple, and a sunny Candlemas presages a cold spring.  In ’s version, a day sunny enough for the groundhog to see his shadow sends him scurrying back down his hole.

Actually a hibernating chuck rarely wakes up in February, even when other animals have taken shelter in his burrow. Not even a visiting skunk will disturb his deep sleep.  His breathing has slowed from 35 times a minute to only one every five minutes, his body temperature has plummeted to a chilly 40 degrees, and his heart is beating so lethargically that if he got a wound it wouldn’t even bleed.

The woodchuck is a rodent, closely related to other gnawing animals.  His paws are designed for digging, enabling him to make his underground tunnels with ease as well as get beneath the vegetable garden fence. His claws also allow him to climb, even a 40-foot tree.  He rarely does so, but when he does, he returns to the ground headfirst, defying gravity just like a nuthatch.  He’s also smart enough to make several entrances to his den that don’t have a telltale pile of excavated dirt beside them.

The furry creature sitting on his haunches in the middle of a summer meadow looks very different than he does at birth.  He’s born as bare-naked as a bird, as hairless as a peeled peach. It takes him a full month just to open his eyes and grow his fur coat. At six weeks he switches from Mom’s milk to grass, weeds, small bugs and of course any vegetables you’d care to offer.  Leaving the home nest, he digs his own modest burrow and begins to stuff himself into a roly-poly state in preparation for a winter of hibernation.

Although there may still be plenty of edibles in October, the chuck stops eating (earlier sunsets are his clock) and sits around waiting for his digestive tract to empty.  Then he retires to his cozy nest, and we gardeners heave a sigh of relief that our late crop of lettuce or peas will be safe.

Since we’ve always had dogs that sleep outside in the hay at night, we never had the problem of woodchucks raiding the vegetable garden, even though we had plenty of woodchucks.  When we bought Locust Hill its meadows were pockmarked with woodchuck holes.  It wasn’t until coyotes moved into the neighborhood and scared the chucks into making their homes in the hedgerows that our meadows finally turned into smooth green blankets.

That’s about the only good thing I can say about coyotes.  Some day I’ll write a column on these sheep killers.
Posted by Weeds and Wisdom at 11:55 AM