String Too Short To Save?

I pulled up my “Idea File” yesterday, the place where I stick newspaper clipping and ideas that never germinated.  I should probably label it “string too short to save” like the box that old lady saved.  Nothing in my file would fill a column, but hopefully they just might if I combine them.

Here’s one about a Russian scientist, Ilyn Raskin, who has been tricking plants into manufacturing the chemical defenses that form the basis of plant-derived drugs.  Like irritating an oyster so it will make a pearl, Mr. Raskin subjects plants to environmental stresses so they will produce disease-fighting chemicals.

The standard method most scientists use to discover a plant’s potential as a medicine is to collect wild plants, grind them up and analyze what chemicals they contain. Raskin’s approach makes a lot more sense.  The same way you can’t tell if a man has a temper until you provoke him, you aren’t able to discover certain chemicals in a plant until it is required to use them.

Mr. Raskin grows his plants in a greenhouse so their sensitive roots can be exposed to various pollutants and toxins which encourage them to produce powerful defensive chemicals.  According to the article many of these treated plants that had appeared to have no disease-fighting potential before being stressed suddenly produced some.

Since this article contained no date, I looked up Mr. Raskin on the Internet.  I was delighted to find he is still busy with his experiments at and has won several awards for his work. 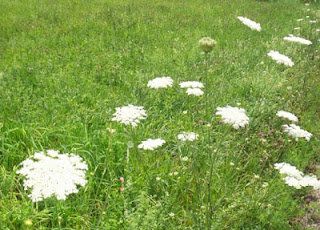 St. Anne was the patron saint of lacemakers and pregnant women.  She and her husband Joachim were married for many years before Anne became pregnant, and according to legend, it was only divine intervention that enabled her to conceive.

Oh, this article will turn your stomach.  It’s about the many mistakes made over the years by the Department of Agriculture. These gentlemen imported many foreign plants and insects to cure supposed ills.  The most famous one was the kudzu vine introduced to the southern states to stop erosion. 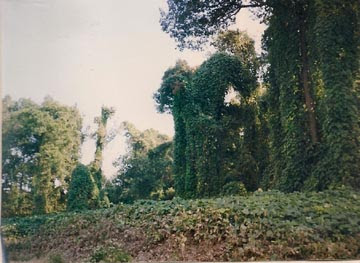 This galloping nightmare has covered hundreds of square miles of land, running rampant over fields, climbing trees and turning normal woodlands into jungles.  The first time Hank and I traveled south we could hardly believe how this vine had strangled forests and even houses.

The USDA was also the villain responsible for bringing the water hyacinth to , a luxuriant flower that has caused great grief and expense by clogging rivers and waterways in and .

has not escaped its share of USDA mistakes.  The worst one was recommending that farmers use the Multiflora rose as a living hedge, claiming these thorny bushes were cheaper and easier to maintain than fencing, and would keep in even a calloused old bull.

Our best friend, Robin Mead, took that advice and planted these destructive shrubs, which have self-seeded and ruined acres of pastureland, including those on Locust Hill.  They are almost impossible to get rid of.  Unfortunately they fill the air with perfume in June and produce bright red rose hips in the fall, making them appear to be an attractive landscaping plant to people who have no idea what villains they can be.

The forerunner of the USDA, the U.S. Patent Office, was the guilty party that advised farmers to grow crab grass for animal forage back in the early 1800s. Claiming this ubiquitous weed would produce an excellent crop and grow in any soil, they encouraged all too many farmers to plant it.