My Report Card has a "D" 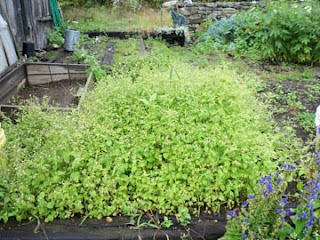 I know there are far more weeds than wisdom in my columns, and unfortunately this summer the weeds totally dominated my life.  As a consequence, the annual Report Card on my garden’s successes and failures is mostly on that subject.  The photo above, a small bed in the vegetable garden bordered by railroad ties where I’ve always planted melons, gives you an idea of the weed problem.

Having been sick for most of May and June, my stamina was limited so I decided I’d just weed the bed and scatter all my leftover flower seeds there, letting them do their thing without any fuss from me.  Well, that’s what I did.  The new crop of weeds that quickly appeared allowed exactly 2 brave zinnias to fight their way up into the sunlight.

Daughter Trum, who always has new and helpful garden ideas, has handled this sort of problem with rugs.  Last year she laid them down right on top of an area of lawn she wanted to use for a raspberry bed and didn’t remove them until this past June.  It worked beautifully, so I thought I’d try it.  My weeds were so easy to pull, I did that first, a total of 8 buckets’ worth and then laid down my old rugs.  I’ll let you know next June how well it worked. 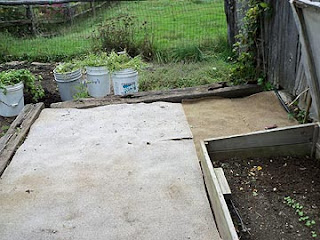 I’m not happy using poisons, but finding a large bucket labeled Round-Up in the cellar this summer I used it to kill the thistles and nettles in the sheep pasture.  Hank loved to buy things in quantity, but he’d bought that Round-up so long ago it had lost its power.  Nothing died. When I priced a 25 gal. container at Lindell’s, I found it costs $84.95.

I do use poison on the driveway. It’s called Ground Clear, and prevents anything from growing for up to a year. The driveway was turning into a field of weeds, since I hadn’t used the 2 gal jug of Ground Clear since Hank died in 2005.  I filled the sprayer with the proper mix of water and poison and sprayed a large area of driveway.  Nothing died.  Obviously that poison was as old and tired as the Round-up, but I then tried using more without mixing it with water and had a bit more success.

You’d think I’d have learned my lesson after using those two ancient  products, but it never occurred to me that the large bag of grass seed in the shed could be equally dead. I think I told you about all the roots in the lawn that were being chewed by the mower.  I’d spread a lot of beautiful compost over the roots, sprinkled each area heavily with the seed and even bothered to water each area.

When no tender blades of grass appeared, eventually the compost washed away.  I have now bought fresh grass seed and re-done the areas and am happy to report the roots are fully  protected. 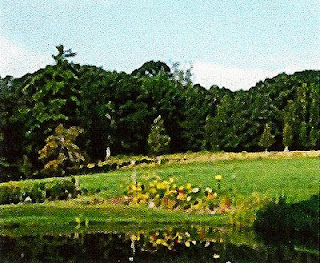 Remember the bed of day lilies just beyond the pond that I planted back in 2003?  I tried to enlarge this photo and I'm afraid it got terribly fuzzy., but it still shows how when the lilies bloom each summer they are reflected in the pond’s mirror of still water.   Below is what the lily bed looked like last spring, such a mess of weeds I couldn’t even find the lilies. 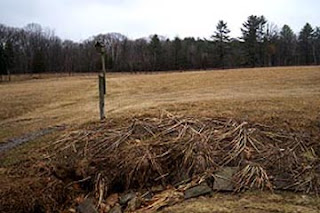 I just didn’t have the energy to tackle those weeds, and sadly facing the fact that I have too many flower beds,  I decided I must give that one up.   Well, day lilies are one of the easiest and hardiest plants to grow, barely giving any sort of trouble to the gardener, and all those determined day lilies buried beneath a mess of weeds popped up and bloomed anyway.

Probably half the reason I garden is so I’ll have something to write about in Weeds and Wisdom, but this column wasn’t much fun to write.  I hope you got a laugh out of all my stupid mistakes.  I also hope your summer was more rewarding than mine.