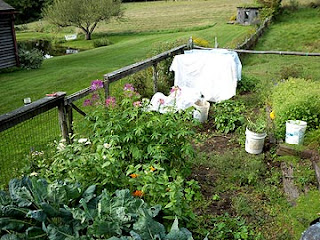 It’s been such a weird summer weather-wise that there’s no way anyone can predict how soon Jack Frost will return from his summer vacation.  I’ve known him to arrive as early as August and as late as mid-October.  A frost, unlike a freeze, doesn’t necessarily reach every nook and cranny of a property, so smart gardeners pay attention to which areas of the yard are prone to a rime of white in the early morning and try to plant their vegetable garden in a protected spot unlikely to be plagued by those early undeserved frosts.

One night last week frost was predicted so I got out the old sheets and bedspreads to cover my tomatoes and peppers, the only vegetables worth saving.  With global warming, it really makes sense to cover things since early frosts are often followed by weeks of warm weather. My spider plants were still blooming, but I'd used all the pink and white ones and the purple were too tall to cover up.  As it turned out we didn't get a frost that night anyway.

Keeping track of the dewpoint is a good way to be forewarned about the possibility of frost. Frankly, I find the whys and wherefores of the evening dews and damps very confusing, so I’ve been reading up on the dewpoint.  I’m still confused, but here’s what I’ve learned. Dew is the result of water condensation.  The earth absorbs heat during the day and loses it through radiation at night. Over 80 percent of this lost heat is taken in by water vapor and carbon dioxide in the air. If the air is dry, the drop in temperature is increased through evaporation, which has a cooling effect the same way sweat does.

As air cools, it is able to hold less and less water vapor.  When it can hold no more, it condenses, forming dew, and the temperature at that moment is the dewpoint.  So?  What’s that got to do with frost??
When dew forms it releases energy and that energy allows the temperature near the ground to remain at the same level as the dew point. Therefore if the dewpoint is hovering in the low 30s, one should prepare for frost.  If the humidity is high, so is the dewpoint, and the chance of frost will be minimal.

A night of dry air with clear skies and no wind indicates a low dewpoint.  That’s when we should scurry around with the old sheets and bedspreads, bushel baskets and anything else we can find to cover up tender vegetables - bush beans, tomato vines, pepper plants, melons. I doubt if many gardeners bother to protect their zucchini, having had enough. 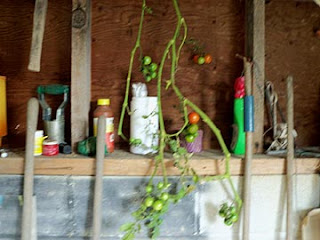 I have very few vegetables left in my garden, except the Brussels sprouts which are no bigger than peas and are just waiting for Jack to arrive.  My tomatoes, the golf ball-sized ones, are still producing, so I plan to go out today and gently uproot their vines and hang them upside down in the garden shed where they will continue ripening.

I hope Jack Frost hasn’t blown his cold breath across your gardens before I post this column.  When I look across the meadow at the forest’s edge I only see a single maple tree making a splash of orange, but quite a few trees with leaves that have turned a dreary brown, as if we’d suffered a severe drought.  With all the water Irene drenched us with, that doesn’t seem possible.

As it turns out  those brown leaves have actually been caused by Irene.  The vast amount of water she dumped on New England has produced horrible fungus and mold, sickening the leaves. Poor !  Let’s hope the leaf peeping tourists don't find that state's autumn colors a dismall beige and brown instead of a rainbow of gold and scarlet.  Irene has given Vermonters enough trouble.