The Easiest Fruit to Grow

﻿﻿﻿﻿
﻿﻿
﻿ I’ve just come back from picking the last of my Fall Gold raspberries.  Are you familiar with these melt-in-your-mouth berries? They are so much sweeter than red raspberries. They are yellow, with a blush of pink when fully ripe, and taste like pure sugar.

Long before I discovered this scrumptious variety of raspberry, Hank and I put in a large bed of a red variety called Latham.  That bed was the inspiration for submitting a column to the local newspaper and started my writing career when it was accepted.   It began this way –

“Growing raspberries is about as tricky as growing a beard. I speak from second-hand experience, I hasten to add.  Beginning a beard or a raspberry bed can be tedious, but once established, both require little pruning and much pleasure.  I assume not having to scrape one’s face every morning must be as delightful as having fresh raspberries on one’s breakfast cereal.”

Raspberries are definitely one of the most rewarding fruits to grow.  Fruit trees - apples, peaches, plums, etc. - all require spraying to produce good fruit, an expensive proposition unless you do it yourself, which is a major job.  Grapes require fancy supports and several years before the vines produce their handsome clusters of grapes.

Before we had a raspberry bed I picked wild blackberries to make my jam, a very thorny ordeal, and a very seedy jam.  Raspberries have neither problem.  Both their thorns and their seeds are inoffensive.  The plants don’t need to be sprayed and most varieties don’t require staking.

Raspberry plants reproduce by sending out underground stolens to make new plants.  We made our second raspberry bed by using these healthy children that pop up each year, sometimes in undesirable places.  The year I bought a dozen Fall Gold plants I made the mistake of planting them in a newly prepared bed about six feet away from the beds of reds.

The next spring many red children invaded my planting of Fall Gold and within a few years had overpowered them, taking  firm possession of their bed.  I needed to find a new home for the gold, far away from the reds.

I tied colored yarn around the stems of the Fall Gold so I’d be able to tell them from the interlopers, and in the spring transplanted them to their new home along the south side of Hank’s shop.  It wasn’t an ideal place, a quarter mile down the hill from the house, and had limited sunlight, but it was the best I could do. 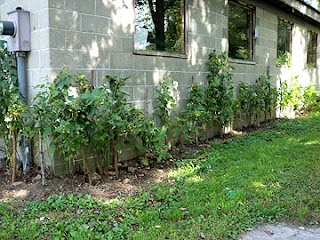 Pruning your raspberries is done in the fall.  The plants are perennials, continuing to live for years and years, but their canes are biennials. In their first year all they do is grow.  In their second year they branch, put out flowers, produce fruit, and exhausted by all that heroic effort, they die.

Each fall when the new canes are still green, the old canes look and are dead. If you don’t remove them you will end up with a briar patch even Br’er Rabbit can’t get in. Of the five or six  new canes, you should choose the best two or three and remove the rest.  The weird photo below, a back to back double view,  shows the few little piles that I removed this fall, hardly an exhausting task. 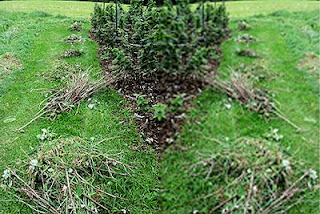 Mulching to keep down the weeds is also done in the fall.  I used to mulch our beds with left over haybales, easy to spread and full of nutrients as they decompose.  They’re also full of hay seeds, however, and after twenty years the beds were a hopeless mess of grass.  Last year I redid one bed and mulched it with wood chips, free from the town dump.  It was such a major job that I eliminated the second bed, giving away many of the plants to friends.

Some raspberries produce fruit just once a summer, usually in July, but other varieties have berries from late July until frost and are called “everbearing.”  These varieties are pruned differently since the first year’s cane produces the fruit and at the end of the season can be cut as the following spring a new cane will grow up to replace it.

My Fall Gold are supposedly the everbearing type, but they don’t behave that way. They only start offering me ripe berries in mid-September, probably because they get so little sunlight.    Unlike most red varieties their canes grow very tall and need staking, but because “Out of sight” is “Out of mind,” I never got around to pruning or staking mine until this year when I needed a good photo for this column.

Raspberries get moldy very quickly after a rain and need to be picked as soon as possible.  My reds did fine as they are harvested in July, but there was just too much rain this fall and so most of those sweet yellow berries got too moldy to eat.

I recommend this variety, however.  And I’ve just gone on the Internet and read about a Fall Gold BUSH that sounds much easier to maintain.  It’s everbearing, providing fruit from June until frost.

Posted by Weeds and Wisdom at 2:54 PM