A Mishmash of Garden Thoughts 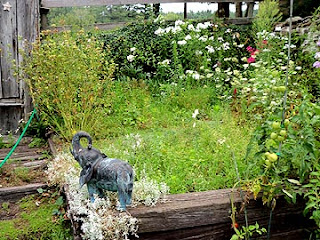 Most of the garden knowledge I’ve gained over the years has been learned through my mistakes as I tried to turn Locust Hill from an abandoned farm into an attractive landscape.  You might not be familiar with a few things I’ve discovered so this column will be a sort of mishmash.

First, because I like to put a photo at the top of my columns,  let’s talk just briefly about the incredible weeds we’re all coping with this summer.  I weeded the little garden in the photo above about a month ago, and now it is once again drowning in weeds.  If only it were drowning in rain water!  The ground has been rock-solid  which makes getting a weed’s root impossible. Thoroughly watering an area early in the morning or late in the day when the sun isn't busy baking the soil helps, but I am very stingy about watering as I have a dug well.  One summer when the well got plugged up and we were without water, I was  the one to decend the ladder and solve the problem, a very unpleasant experience.

With global warming making everything grow so fast, I’ve discovered that buying a flat of sprout seedling from the nursery means they will start to produce sprouts long before cold weather arrives. That results in sprouts totally lacking in flavor.  I now start my sprouts from seeds directly in the garden in mid-June so they mature in October and have the great flavor that cool weather gives them.

Are you having trouble husking your corn this summer?  I don’t grow corn as I get the most delicious corn for free from the Fords who rent my cow pasture and hay fields, but I’ve noticed a big difference this year in husking it.  The husks have grown so thick and strong that it takes a professional wrestler to pull them off.  Since I am a weak and weary widow at the end of the day it takes me forever to husk my corn!

The warm weather is affecting lots of vegetables.  Imagine having juicy ripe tomatoes in early August, a real treat.  My bush beans are acting like pole beans, sprawling in all directions so it's hard to find the beans.   My peas... turns out my peas were one of my latest mistakes.  I always eat my peas right there in the garden, but the peas I've grown this year have pods that just wouldn’t split open.  It was so frustrating having to dig at each pod, bit by bit and getting a single pea at a time.

Guess what.  I’d forgotten that I’d ordered a variety of snap pea called Cascadia, the kind you eat pod and all.  Pinetree Seeds doesn’t tell you much on their seed packets and I’d forgotten that for a change I’d ordered edible pod peas.  I’m afraid my mind is getting as dim as a flashlight with a weak battery!

Many years ago I planted pieces of rooted quince in my perennial border, thinking their early blooms would compliment the daffodils that bloom at that time. They did just that, but I definitely don’t recommend this idea.  Quince is a bush and every year it gets bigger and bushier and sends new shoots up in all directions.  They’ve become a real pain as their branches are full of thorns and require clipping every summer.  So just remember if you’re thinking of planting a quince that you can’t talk these shrubs into staying small and beautiful. 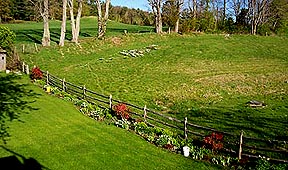 No other tips, but some news.  Remember Golda Meir, my 25 year old goldfish who died last summer?  Many readers have asked if I’ve gotten a new fish for the pond to replace this amazing old lady, and last week I finally got around to it.

Several readers suggested I get a Shubunkin, a fish that adapts well to new environments.  When I went to the pet store I saw that these fish have dark splotches and might be very hard to see in my pond.  Another fish swimming around in the tank was silvery white. The pet store lady said it was a Comet and should adapt to a new home just as well as a Shubunkin, so that's what I bought. 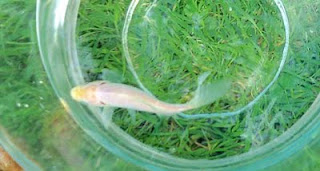 Many readers sent me suggestions of names  for my new fish, but unfortunately I can’t remember any of them but the one that I decided to use, Ben Hur.  When I'd aclimated him to the water and let him slip into the pond, he dove down to the bottom and disappeared.  He probably won't be big enough to see for several years, and of course I may never see him again if his changed environment is too much for   him.

Enjoy the rest of the summer and when cold weather comes enjoy seeing the weeds die!
Posted by Weeds and Wisdom at 1:33 PM