﻿﻿﻿﻿A blog has such a different format than my old website that it wasn't until this past week that I read all the nice comments various readers have  made.  Thank you all so much.  In future I will respond to them.


All that talk about gates in my last column got me thinking about fences and how important they are, especially around a vegetable garden.  Having grown vegetables without the protection of a fence for 12 years, I know just how much heartbreak it can eliminate.

My first vegetable garden was way up behind the barn, which meant chickens scratching eagerly for grubs in my newly seeded rows, rabbits crunching merrily on my Buttercrunch or fat Mr. Woodchuck inviting his wife to dine on fresh broccoli.  Periodically the sheep or the heifers would escape from their pastures and trample through the garden, but we’ve always been lucky that the deer do not bother us, probably because the dogs live outside.

I felt so strongly about good fences that I had no trouble writing a song about them (to the music of Rodgers and Hammerstein’s “There is nothing like a Dame”) for one of my garden programs. 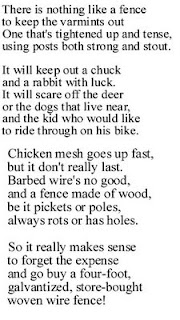 That’s the kind of fence we put around the vegetable garden when we moved it down to the backyard.  Planting the peas and cukes next to it meant they had something nice to climb, and made staking the tomato plant next to it much easier. It also elimintated the varmint problems.  Ooops, that’s not quite true.  When I grew strawberries in the vegetable garden, I had a real problem with chipmunks who adore strawberries and had no trouble getting over or through the fence.

I must have caught four or five of those little rascals in my Hav-a-Hart trap before I realized it was a hopeless solution.  I now grow my strawberries in a long row covered with netting just in back of a stone retaining wall which makes picking the ripe fruits a joy for someone with a bad back.

I never raised strawberries in my first garden and don’t remember any chipmunks.  The most notable varmints back then were my dogs. Dogs are great companions and can’t really be considered varmints, but without a proper fence, ours were always lying down on the lettuce or searching through the rows for the rabbits they could smell.

Hank’s Irish water spaniel, Bog, was the worst.  He loved radishes.  He’d go to the radish row, pull one up, set it between his paws and  consume it. I wish I had a picture of this crazy dog, foaming at the mouth from eating red hot radishes.

Bog was a great retriever, so I had to be careful when preparing the soil for planting. If I found a rock and tossed it into the bushes near the garden, he would quickly find it and proudly bring them back to me.  That was bad enough, but when he discovered that if he put a rock in front of the lawn mower it would throw it for him I actually had to tie him up when I mowed the lawn.

﻿﻿
These are the two dogs I have now, Gottoo and Clover.  They often stand at the garden gate, obviously longing to join me while I’m working.  Clover is a rescue dog from , a well-behaved lady who would probably just sit on the steps to the garden shed if I invited her in while I was planting or harvesting.  She never gives me any trouble.

On the other hand, Gottoo is an incorrigible Basenji, who would cause infinite harm should I be stupid enough to leave the gate open.  Are you familiar with this breed of dog?  They’re as independent as a cat, cannot bark, but yodel when upset.  It was more than a year before Gottoo wagged her tail at me.  She has destroyed eye glasses, mail, pill bottles, in fact anything left within reach, and loves to tip over waste baskets and trash cans. 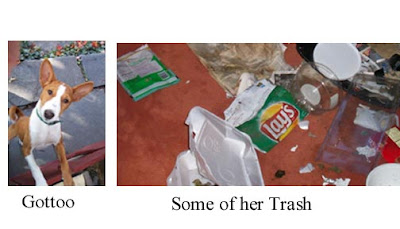 Apologies.  I guess I got waylaid from my subject, but I thought you’d rather see pictures of my dogs than pictures of fences.

Posted by Weeds and Wisdom at 3:55 PM