Why have a Vegetable Garden? 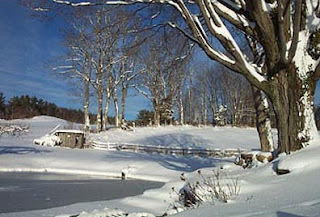 When the frost king has iced up the windows,
And the wind has turned noses all numb.
When the snowstorms are here it’s the time of the year
When those lovely seed catalogs come.

Then I get out my gardening notebook;
I lay out my plot with a rule.
No trowel do I need to plant my fresh seed.
A pencil’s my gardening tool..

My garden is lush and prolific.
In my mind all the seeds are soon sown.
My potatoes and beans and my various greens
Are the finest that ever were grown

I know, for experience teaches,
Come summer it won’t be the same,
But I’m knee-deep in snow so my garden can grow
Just the way that those catalogs claim.

This poem that I put to music for my Vegetable Program was written by Cedric Adams. I haven’t a clue who Mr. Adams is, or was, except that he obviously was a great gardener, and his poem is so appropriate for this column I had to use it.

I can think of dozens of reasons to have a vegetable garden besides the joy of brousing the seed catalogs when you're snowed in. It doesn't require the sort of talent or training needed by an artist or a musician.  Trying to sing in the choir when you don't have an "ear" can be as painful as trying to do your income tax without a calculator.  But the gardener doesn't need expertise to try his hand at growing thing.  Green thumbs are a fallacy - all thumbs get brown in the garden.
Vegetable gardening is a hobby that entails no red tape.  Think  of that! No forms to fill out, no need for a permit, no reason to stand in line, and nopthing to declare on your income tax.  What other hobby can you say that about?  Even a simple fisherman has to get a license or he'll have the game warden breathing down his neck.

Nnowadays there’s a very special reason to have a vegetable garden.  With our nation’s frightening obesity problems,  being able to offer your kids or grandkids fresh  and tasty vegetables for snacks is one way to keep then thin.  I"m  sure my mother's vegetable garden began my love affair with rabbit food,  what Mom called raw edibles.  Getting the kids to help plant, weed, mulch, harvest and do all the other jobs involved in a garden is another way to help keep them thin.

My three daughters learned how vegetables grow as soon as they could toddle out to the garden and help pick the beans, but I can remember one summer when I had the pleasure of introducing a city child to the miracles of the vegetable garden.  Tommy was about four at the time and his blue eyes grew as big as morning glories when we went out to pick a ripe tomato for lunch.  After all, tomatoes are supposed to be wrapped in cellophane, not hanging like red rubber balls on green vines.

Tom was as delighted as a kid at a magic show as I showed him around the garden, and I must admit I felt a bit like Houdini as I pulled aside the leaves of a squash plant to reveal the tiny golden sausages just starting life, and one fatter than the biceps of a weight lifter that I’d neglected to pick when it was young. I untied the leaves protecting the just beginning fruit of a cauliflower plant, relishing Tommy’s laughter as he discovered the little golf ball tucked inside.

We walked the new carrot row, thinning a few so that Tommy could see the magic of pulling a bright orange carrot from the dirt. The bush beans were ready for picking so I went to get a basket, and what with the phone ringing and a few other interruptions, it was a while before I got back to the garden. Sweet little Tommy had turned into a magician himself.  He’d pulled the entire row of inch-long carrots out of the hat so to speak. At least he seemed to enjoy eating quite a few of them at lunch.

The difference between vegetables fresh from the garden and ones bought at the supermarket is like comparing Beethoven’s 5th symphony to a child’s rendition of chopsticks. And  as Cedric Adams points out, browsing through the seed catalogs is  a great way to spend a snowy afternoon.  But before you make your list of the seeds you plan to order, you might do well to check out last year’s leftover seed packets. If, like me, you’ve left your unused seeds  scattered around so they get wet or moldy or overheated,  very few will germinate. However, if you’re one of those conscientious people who puts her tools away at the end of the day and her seed packets in a cool dry place,  preferably in a coffee can so the mice can't get them, you can assume all of the 2010 packets will be viable this year.

The two books I have that describe how to test for seed viability make it sound more complicated than a pregnancy test, and more work than just planting the seeds and hoping.  More helpful are their lists of the life expectancy of various vegetables seeds.  Some, like tomatoes, cucumbers, melons and beets can last for six years or more.  The weaklings, viable for less than two years, include corn, leeks and onions, parsnips and parsley.  All other vegetables fall in the middle, living anywhere from two to five years.

I hope I’ve convinced you all to have a vegetables garden this year, or at least a few containers for a tomato plant or two.  I am still addicted to rabbit food, and in summer  I like nothing better than a heaping plate of whatever is ripe in the garden every day – snap peas, asparagus, radishes, carrots, peppers, cherry tomatoes, cauliflower.    In winter, even though they’re from the supermarket, I cut up a pile of  raw vegetables including celery  or cauliflower with a dip to dunk them in. I don’t carefully arrange my veggies on a platter, but I bothered to do so for their photo. 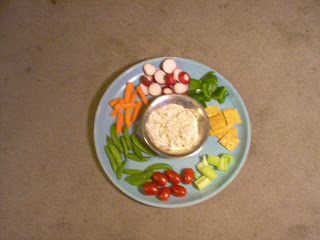 Posted by Weeds and Wisdom at 1:40 PM