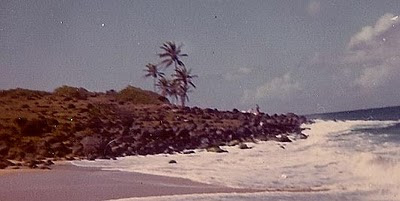 Let's leave all this cold weather behind and  head for the Caribbean in a little Memory Vacation our family took in 1972. The first palm trees I ever saw were on the island of Grenada as our airplane settled down among a few stray goats on the primitive dirt runway. Driven through the night at breakneck speed, we gaped at the surrounding jungle as we careened around and around hair-pin turns and dodging dogs and people through tiny villages until we reached St. George and the tiny cottage we'd rented.

's beaches are pristine, and back in 1972 we had them all to ourselves.  Our vacation included a dozen adventures - a visit to the prison to buy sandals made by the convicts;  a luncheon invitation and a game of cricket with the Briggs, a family who'd befriended us; listening to a steel band playing classical music every afternoon; New Year's Eve at the Berian Bible church.  But best of all was climbing  Qua Qua, the only mountain on the island.
Guided by Albert, a towering native Grenadian in immaculate white pants and shirt, we headed up a muddy track through the steamy jungle, surrounded by a tangle of vines and giant palms and exotic blossoms. The sounds of chattering monkeys and squawking, rainbow-hued birds filled the humid air.  Tiny striped lizards darted across our path as we squelched our way up the soggy trail.  A breath-taking view greeted us at the top as we looked down on the Grand E'Tang, a crater lake far below. 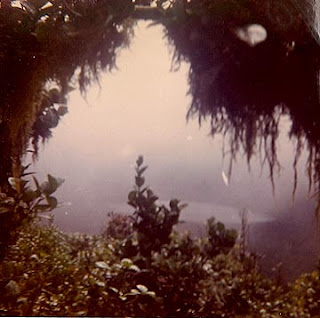 After we'd consumed the lunch Albert  provided, we headed back down the mountain.  Our barefooted guide led the way, marching along with ease and remaining upright and unblemished by a single mud spatter.  The , on the other hand, slipped and slid from one tree trunk to another on the chocolate pudding path,  more often landing on our behinds than our feet.  When it came time for a break, we just flopped uncaring into the mud.

﻿﻿
﻿﻿
While we rested, Albert, his mouth pinched from trying not to laugh at the five mud pies in his care, pointed to a coconut palm  beside the trail. It's the easiest palm tree to identify as  it always has a few conspicuous coconuts hanging among its feathery leaves. That's because it knows no season and produces its flowers and fruits all through the year.  The blooms look like  exotic, upside-down trees, queerly jointed miniatures made of polished ivory, but they quickly turn brown on exposure to the light.  These clusters of flowers produce 10 to 20 full-sized nuts in six months, which will be fully ripe in less than a year's time.

A coconut, with its buoyant husk and leathery skin, can take ocean voyages that last for months.  Tossed by a wave onto a new beach that is suitable, the nut will send out a sprout from its soft eye.  One end of this sprout digs its sharp point down into the sand to start a root system, then sends a spear upward, the new baby palm tree.  Until it produces its first leaf, it gathers nourishment from the spongy tissue that fills the cavity inside the nut.  This edible custard is supposed to be ambrosial, but Albert couldn't find us a ripe nut on the mountain.

Another distinguishing feature of the coconut palm is the fact that unlike most palm trees, it is rarely cluttered with the rat's nest of hanging dead leaves.  As the old leaves die, they break off, leaving a permanent scar on the trunk.  These scars are what enable the natives to climb up a coconut palm as if the trunk were a ladder. We watched as Albert got out his machete and did just that.  Then, making sure we were not in the way, he whacked off the top four feet of the trunk with his machete.  What he was after was a thirst-quenching treat, heart of palm.

Located at the top of the trunk, just below where new leaves begin to sprout, this succulent white vegetable is as thick and long as a man's leg if taken from a good-sized tree and is called "Millionaire's Salad" in many Caribbean hotels.  The children were pretty skeptical, but we all had a taste.  I can't remember whether it was good or bad, but definitely juicy and I think we were all happy when we reached civilization and got to wash off not just the mud but the sticky juice.
The most elegant species of palms is the Royal palm.  It has a straight, smooth-ringed gray trunk. These regal palms are planted in stately rows leading up to government offices on most islands.  It turns out that it was not called royal because of its elegant growth habits, however, but to honor General Roy Stone, an American engineer in .
An amazing looking palm species  called a cohune,  grows to a height of 100 feet.  I saw a grove of them in , some of their plume-like fronds as long as 30 feet.  Unlike those of most palms, they point skyward, only flopping over when they die and are replaced by new ones.  There are more than 1,500 species of palms in the world, and at this moment I'd much rather be studying some in the flesh than in a book.  I can picture one of those powered sugar beaches in , ringed with swaybacked coconut palms, and remember basking in a tropical sun so hot it would evaporate raindrops, making them feel like tiny prickles on your skin.  Ah, well, time to put another log in the wood stove.

Posted by Weeds and Wisdom at 6:17 AM