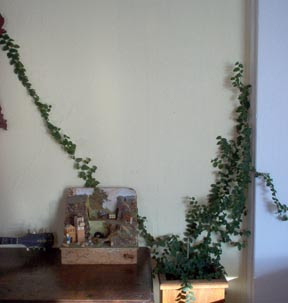 I’m no authority on raising houseplants, but that doesn’t stop me from having plenty of them. Houseplants help me keep my sanity during the winter as much as my cat does. Both need food and water and sometimes bring unwanted creatures into the house, be it white fly and red spider mites or dead moles or baby birds, but when Jack Frost covers my gardens in a blanket of white and I hear the deer mice scurrying around in my attic, I’m glad to have both houseplants and my cat.


My favorite houseplant is the creeping fig, Ficus pumila. I first became acquainted with it at the age of 12 when I saw one growing in my great aunt’s house. She had allowed it to escape from the confines of her conservatory and wander at will. Its dainty creeping branches, which cling by tiny aerial rootlets, had traveled across the livingroom ceiling to the hall and were gracefully making their way upstairs.


It was more than thirty years before I saw another creeping fig and thought to raise one of my own. That year I topped my Christmas Wish list with a Ficus pumila. Not many nurseries carried them back then, and I think Hank probably went to half a dozen before he found one at Whiting's in West Hartford. It was a scrawny looking specimen, but I set it in a sunny window and taped its two drooping branches to the window frame. Two months later they had still made no attempt to cling to anything.


Finally in late March two new shoots appeared and before I’d even taped them, they had put out stickers of their own and begun to creep up the window frame. By June one had almost reached the ceiling. If I’d done a little research, I would have saved myself a lot of agony. It turns out that the creeping fig has both male and female branches. The males are sterile and they refuse to cling to anything. The females are fertile fruiting branches, the ones that latch onto whatever’s close at hand and start to climb.


Being an advocate of Women’s Lib, I won’t stop to make any analogy of all this. Suffice it to say that it is the fertile branches that produce babies and climb the walls. Of course a ficus raised as a houseplant does not produce fruit, but in the wilds of Asia, its native habitat, it does have small edible figs. Like its close relatives, the weeping fig and the rubber plant, it is undemanding and disease free when grown as a houseplant, but it must never be allowed to dry out. The one that sat in a south window died of thirst one hot summer day when I’d forgotten to give it a drink. 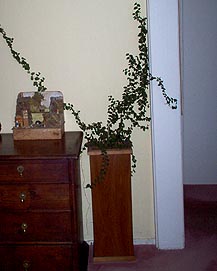 In fact I killed several ficus plants that way before Hank
began building me containers that insured my fig plants  plants
would never die of thirst. The first was the wooden planter
lined with plastic.  As you can see, it stands almost 3 feet tall,
so that once a plant’s roots get established they can reach
down deep to where they can always get water, provided I
give the soil a good soaking once in a while.

That was a nice solution, but the next planter Hank designed was even better as it provided a plant's roots with an endless supply of fresh water. 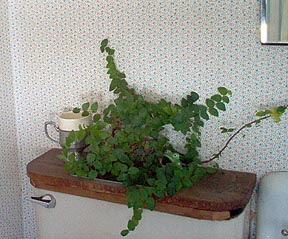 Using a bread tin as a container, Hank punched a hole in the bottom for the roots to go through and fitted the tin  into a nice mahogany board that sat, and still sits, on top of the toilet tank. How’s that for clever? The ficus in that planter was so happy it soon covered the walls and the ceiling . Eventually, however, I re-papered the bathroom and had to pull it down. Apparently it considered this treatment so traumatic that it has been reluctant to start climbing again. 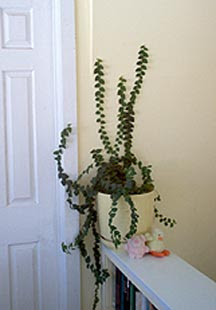 Posted by Weeds and Wisdom at 1:03 PM