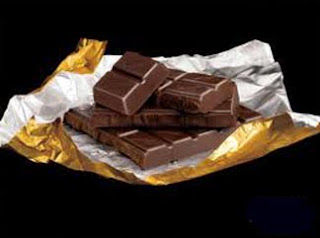 It’s really hard to stick to one’s New Year’s resolutions, don’t you think? I’ve learned not to reveal my own in my columns as it’s painful to see them in print long after they’ve been abandoned. When I was at the impressionable age of 17, my minister preached a sermon on positive resolutions for the New Year – taking up a good habit instead of quitting a bad one. It’s a constructive idea, but one not many people follow. Almost everyone I know takes the negative route, trying to give up something – cigarettes, booze, chocolate.

If you’re a chocoholic who’s contemplating eliminating candy bars and Hershey kisses from your life in 2011, you can still safely read this column as I’m going to be talking about cacao’s horticultural life, not its final products.


No, you cannot grow a chocolate tree in your back yard. It requires a tropical climate, and must be raised within 20 degrees of the equator. Since it would be nice to be enjoying the balmy breezes of Brazil instead of the blustery blizzards of the Berkshires, let’s pretend we’re in South America right now tending our cacao orchard.


The cacao tree is medium-sized, similar in shape to a cherry tree, with cinnamon-colored bark and bright green leaves that are lance-shaped and smooth. Its wood is white and very fragile. The tiny pin, white or yellow blossoms are odorless and do not appear until the tree is 4 or 5 years old.


Our orchard here in Brazil is very tidy compared to those on the Ivory Coast where most cacao is grown. We plant in rows and keep the ground beneath free of brush and weeds. Aren’t the fruits weird? They look like orange footballs, sometimes striped with red, and grow right from the trunks of the trees as well as on the branches.


These gourd-like fruits take six months to ripen, but since blossoms appear year-round, they can be harvested continually. Cutting the pods from the trunks with a machete is relatively easy, but the ones growing high up in the trees must be cut with a cacao hook, as climbing among the delicate branches causes too much breakage.


The pods are soft compared to a coconut. An experienced worker can open about 25 in a minute. Inside there are as many as 40 ivory-colored seeds the size of olives, growing in uniformed rows. When a pond is first opened it looks just like a skull full of the bad teeth of a chocoholic, but once out in the air the beans acquire a purple tinge. 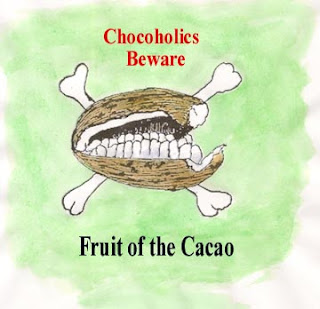 In three or four days the beans begin to ferment and begin to look and even smell a little like chocolate. Then they’re dried, bagged and shipped to the chocolate factory where Willy Wonka turns them into scrumptious delights – but not without a lot of work. First the beans must be washed and roasted, then hulled (the shells are ground up for cattle food,) and the “nibs,” as the inside kernels are called, are ground between heavy steel disks, resulting in a semi-liquid paste known as chocolate liquor.


There were no chocolate candies back in the 1700’s when Carl Linnaeus, the father of Taxonomy, chose to name the chocolate tree Theobromaw which means “food of the gods.” If you’re a chocoholic, why don’t you take up a good habit as your New Year’s resolution instead of giving up chocolate? What a shame to be deprived of something known as the food of the gods.

Posted by Weeds and Wisdom at 5:27 AM

Email ThisBlogThis!Share to TwitterShare to FacebookShare to Pinterest
Labels: cacao, chocolate, Food of the Gods, Resolutions