Incumbents in the Garden 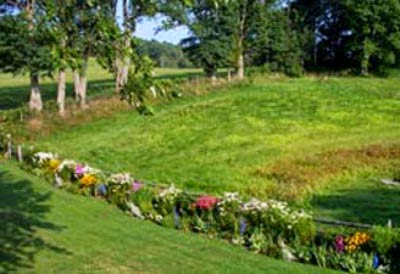 At last, the mid-term election is over. No, there are a few races still undecided, but the most important  result, a Senate dominated by Republicans, is settled.   Harry Reid will soon be replaced by Mitch McConnell as the new Majority Leader!  It took a long hot summer and fall, but I think the American public finally concluded that Obama’s extremely expanded government is not a very good way to run our country.

My head is still full of politics, but it’s  time to get back to gardening, I thought it would be fun to talk about perennials, the incumbents  who survive for years in the garden the same way government officials seem to  remain at their posts from one decade to the next.

Perennials quickly become familiar with  their territory, their roots growing deep and well-established.  I think my lemon lilies have survived at least 4 terms, and even though I can think of many new candidates that would perform with more flair, I can’t bring myself to vote them out of office.  They contribute bright splotches of color when other incumbents are in recess.  Day lilies come in many colors, so if yellow doesn’t appeal to you, try a pink and maroon one. 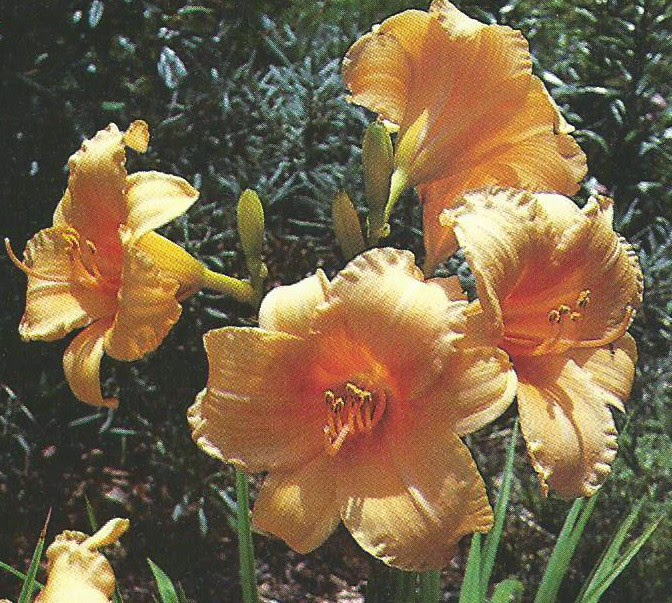 Lilies  do not produce seedling to bring along another generation. Quite a few  perennials do this however.  The phlox plants always start  new seedlings, as do lobelias, but feverfew tops the list, producing cousins, nieces and nephews by the dozen,  the same way  some politicians do.  This year even Jimmy Carter’s grandson and Sam Nunn’s daughter joined the crowd of  candidates. And you can be sure another Clinton will soon join the list. 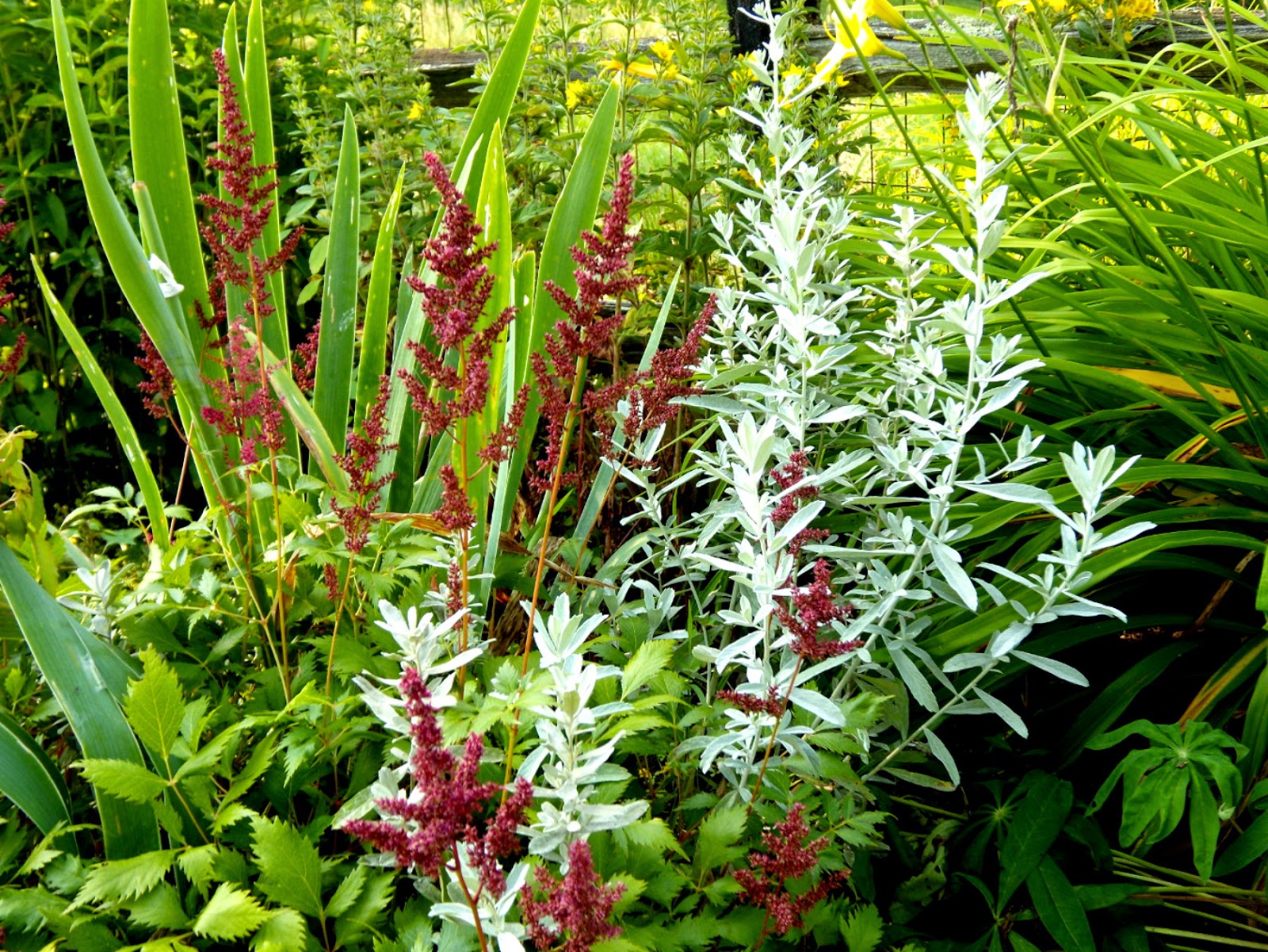 There are many gray-haired plants in the garden, most of them of the Artemesia family. Gray is a very helpful color, especially in keeping apart other perennials who don't get along.  Unfortunately Wormwood, the most common  member can be a trouble-maker. He is very pushy, covering more and more territory if he;s not kept in check.  Luckily his roots are shallow and easily pulled, but if  we neglect this job,  the photo above illustrates the result.  There’s no pulling the roots of this Wormwood. 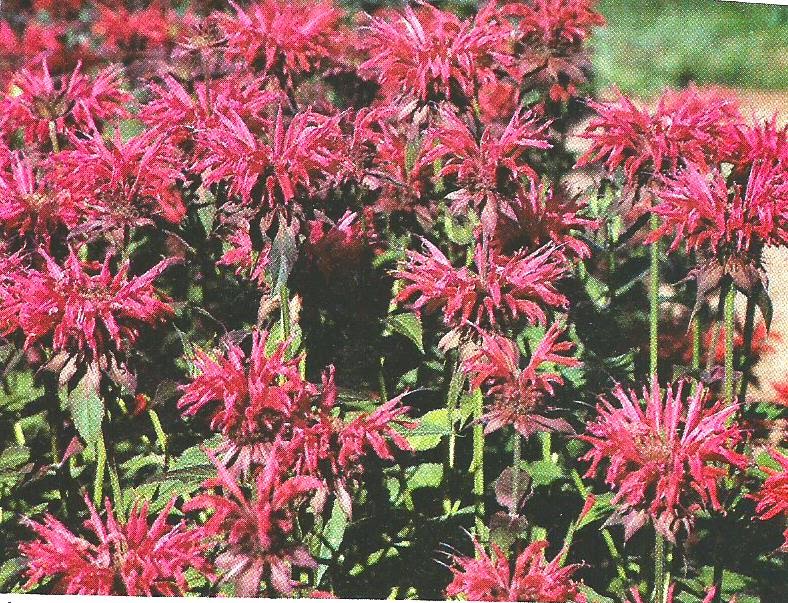 Monarda, also called Bee Balm, a red-headed Raggedy Ann,  is one of the best plants to provide bright red in the garden, and although she likes to cover more and more space each year, she’s quite ladylike compared that old man Wormwood.  Red is a powerful color in the garden but when it becomes too dominant, it’s easy enough to give Miss Bee Balm a haircut. In early spring just pull apart that tightly woven mat of red, loosen its roots and replant some of them in a different spot that needs brightening. 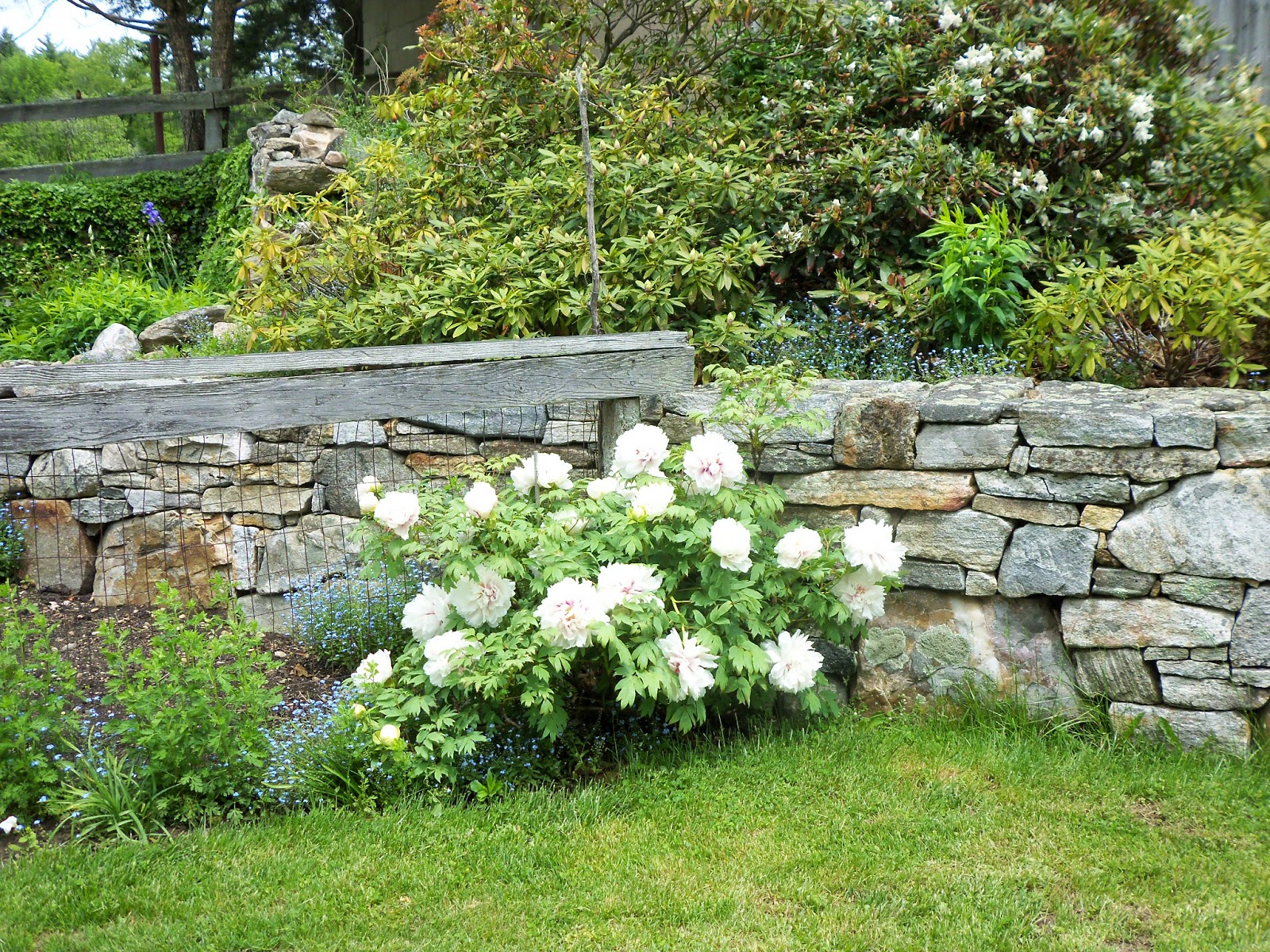 Let’s look at some of the garden incumbents that seem to have no faults at all.  The peony tops this list.  It is almost immortal, but it never tries to add relations to the bed. If planted in late September, its pink eyes just below the surface, the following spring it will start to offer its heavenly scented blooms, and go on doing so every year. Tree peonies are equally rewarding, and both species are rarely bothered by insects. If you find a white tree peony too boring, try a pink one. 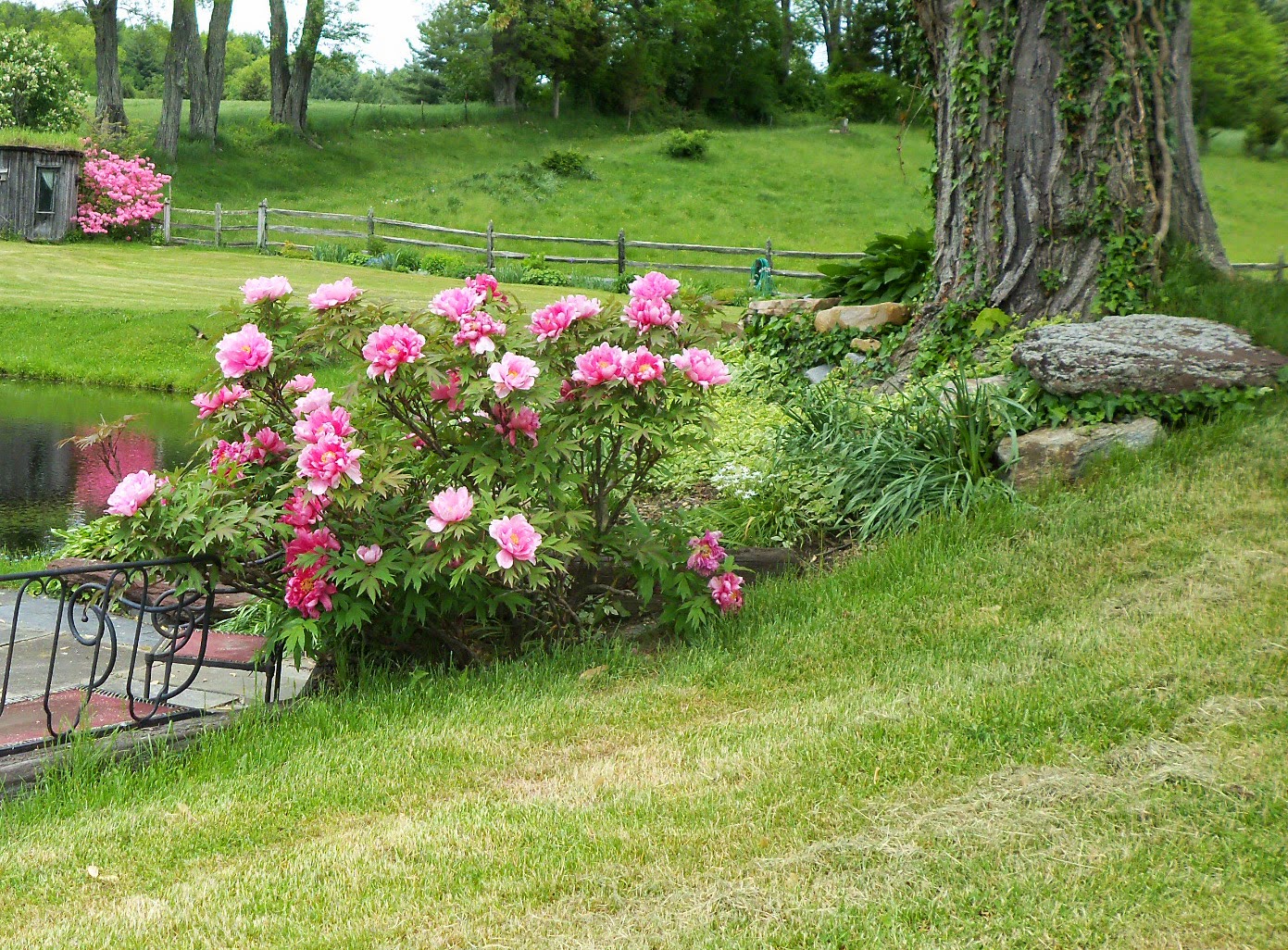 I think my favorite perennial is the lupine. Its leaves pop up early each spring. They look like little green hands and often hold a single drop of dew in the early morning. So appealing. I wish I'd taken a picture of one last spring.

The lupine's flowers are equally appealing.  For many years they only came with blue spires, often turning large stretches in open meadows sky blue,  but nowadays they come in all colors, yellow, white and pink. as well as blue. 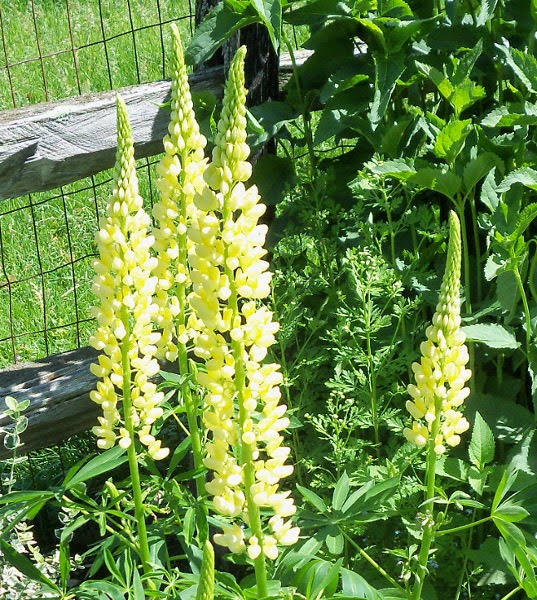 Unfortunately lupines do have one problem, aphids.  It’s not their fault, it’s just that aphids love them, as well as many other perennials. The solution is to keep an eye out and catch these varmints EARLY with a dose of Rotenone. When a spire's blossoms have turned gray with seeds, cut them off so new blooms are encouraged to take their place.

A well-behaved but less colorful perennial I like is Lady’s Mantle.  Unlike many perennials that grow as a clump and allow other plants to pop up in even the strongest union of roots like the previous photo of an astilbe, Lady’s Mantle doesn't allow usurpers to spoil her clump as she has such a thick circle of  roots, topped with round green leaves and soft white flowers.

This plant increases in size every year so that after three or four years you can divide her and get two for the price of one.   I think she's very attractive, but garden books rarely include pictures of colorless plants, so the photo below is one from garden, looking very worn out now that cold weather has arrived. 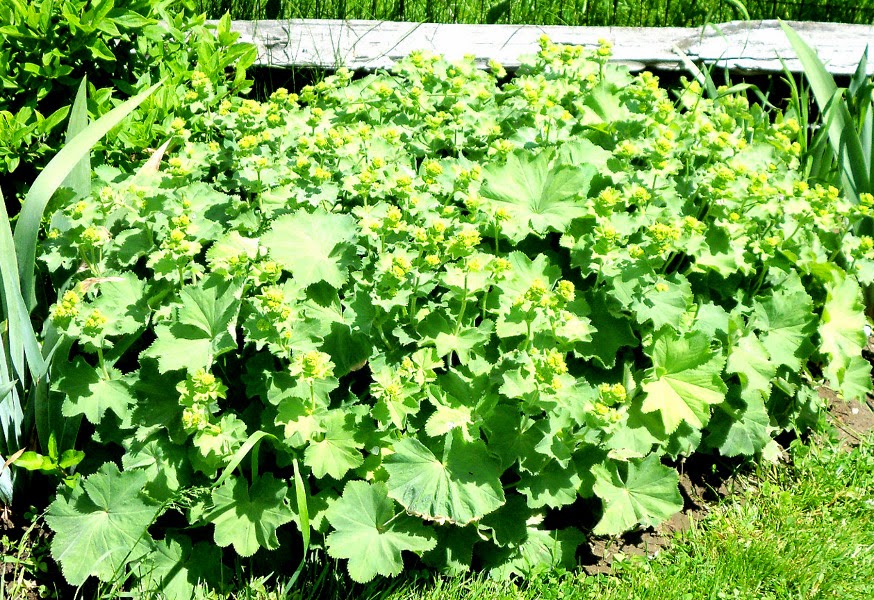 I'm afraid this column didn't offer you much new information,  but I had a bit  of fun writing it.

Posted by Weeds and Wisdom at 9:12 AM