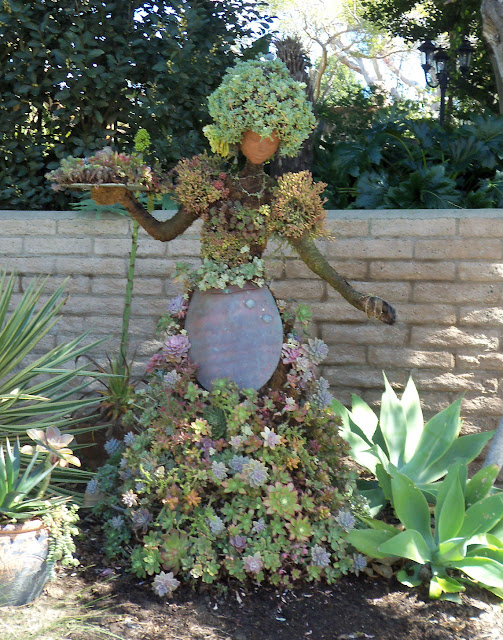 I know I promised to write about the  gardens my girls and I saw on our week’s vacation in California, but I had no idea what a challenge it would be.  I suspected that Lotusland, 40 acres of rare palm trees, cacti,  euphorbia and other unpronounceable plants, would be difficult to describe, so I was eager to visit the small Buddhist garden in Encinitas first.
By the time we reached this incredibly peaceful place of meditation I was so stressed by driving on a 5 lane highway in bumper to bumper traffic that I fell in love with it. The gnarled, twisted trunks of ancient palm trees vanished among the flowering shrubs at either side of the walkway, all perfectly placed to offer a gentle shadow to the tiny cyclamen blooms that peeked out from the greenery of moss and ivy, or warm sunlight to the  sparkling orange petals of a Bird of Paradise blossom.
Only bird song and the gentle murmur of water disturbed the silence, though many visitors strolled the paths. A tiny stream tumbled over rocks to a pool where golden and white koi swished the water into ripples as they swirled back and forth. Small side paths led up from the dappled shade into sudden brilliant sun and the breath-taking blue of the Pacific ocean far below.
I took a dozen photos, many included below, before I realized what made this garden so appealing – the smallness of its plantings.  There were no overwhelming masses of bloom, just beautifully placed single flowers set among the moss and ivy, no vast stretches of landscape, merely  a single clump of perfectly place blossoms set among the soft restful greenery of ferns.  Here and there one could find a comfortable bench beside the path offering rest and meditation.
I assumed I’d find the names of the various plants we saw in the provided brochures, but I was wrong.  They were all about religion  and the “Self-Realization Fellowship.” 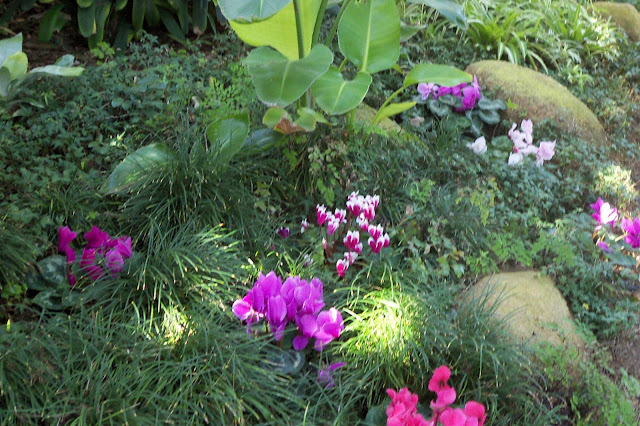 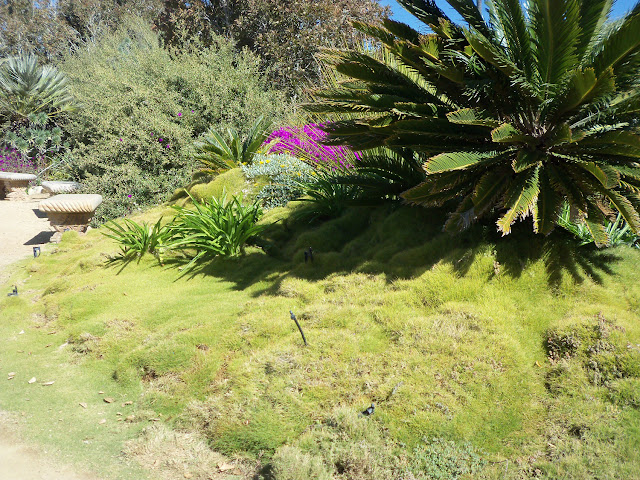 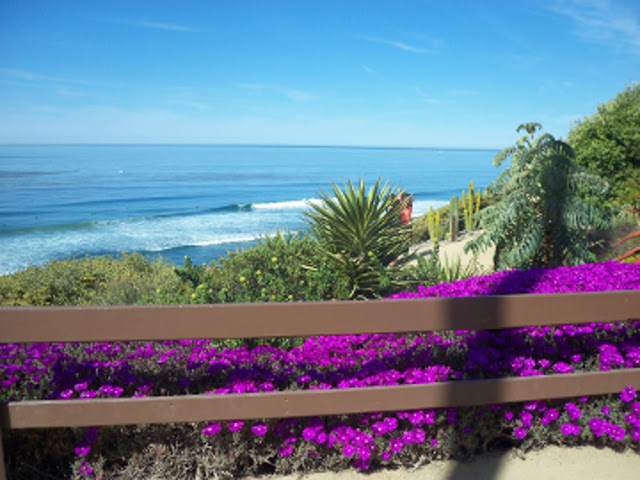 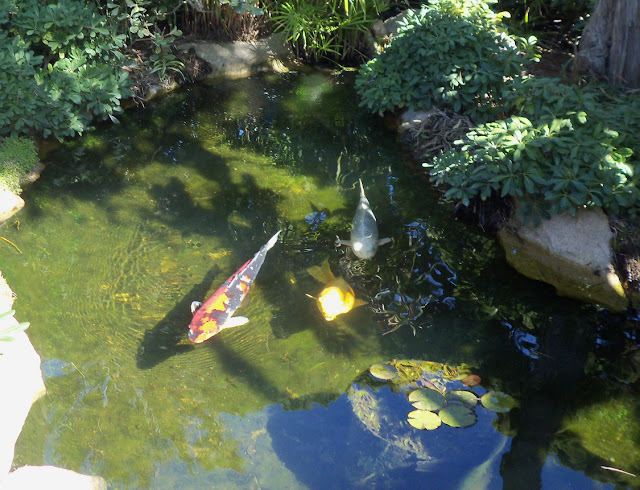 Lotusland is in Santa Barbara so it took us four hours to get there from La Joya, and two hours to cover the vast acres of gardens as our tour guide (required) stopped frequently to tell wonderful stories about their creator, Madame Ganna Walska.  This amazing lady acquired the estate in 1947 and spent close to 50 years planning and designing the gardens and acquiring the vast number of plants and husbands (she had six) during her lifetime.
I was correct in thinking that Lotusland would be  impossible to describe, and far too enormous to depict in either words or pictures. Since our very knowledgeable guide spoke too fast for this deaf old lady to understand her tales, and the book the girls bought for me was only filled with unpronounceable Latin names and technical information about plant origins,  I’m afraid I missed a lot.
But just walking along the paths was mind-boggling. The trees soared overhead, easily reaching 50 or more feet high, lotus  blossoms were as wide across as dinner plates, an arbor in the citrus garden dripped well over a hundred brilliant yellow lemons above our heads. There were pools shaded by giant palms and ferns, paths lined with rare cacti in every shape and size.
There’s really no way to describe it all, so if you’re ever in California, you should make reservations in advance and go to Lotusland.  Here are a few pictures. 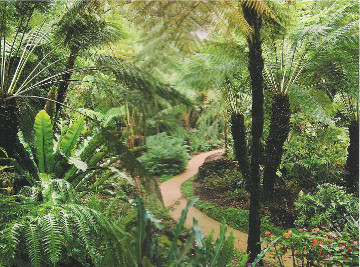 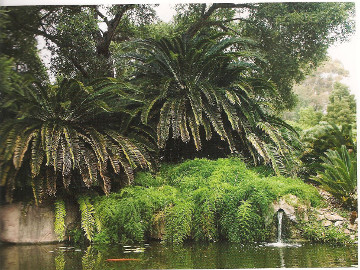 The  palms in this photo are Encephalarios woodi.   They are extinct in the wild.    Madame Walska paid $2500.00 each for these two treasures. 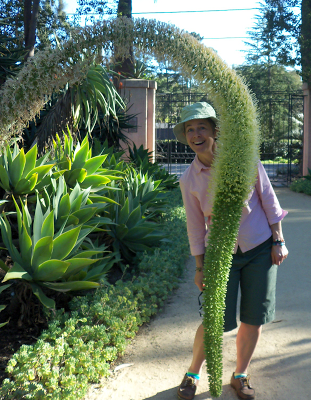 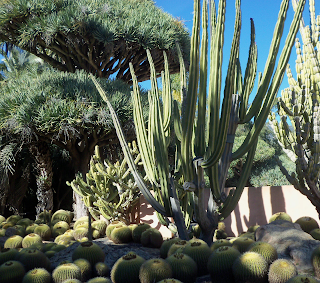 Somehow we managed to see one more garden, quite near La Joya, which was a total contrast to Lotusland.  It contained many of the same plants, but as single specimens, which made them seem very special instead of being in a group of a 100 which was almost overpowering.  I took just two photos in this botanical garden, the lady at the top of this column, and the strange looking tree below.    Do you know what kind of  tree this is? 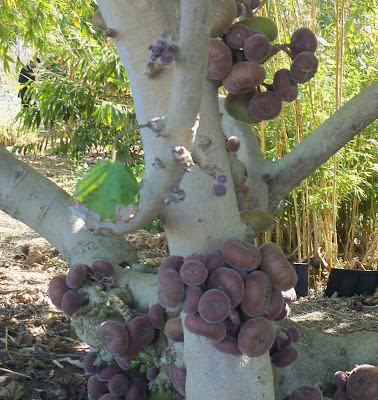 It's a Fig Tree

Posted by Weeds and Wisdom at 1:46 PM