Teaching Kids a Love of Nature 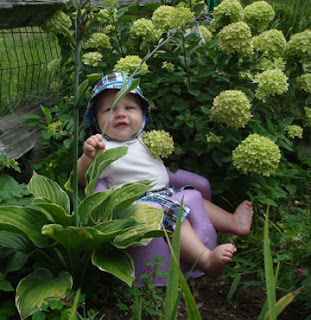 I became a great grandmother on March 16th, but it was only this past week that I finally met my first great grandson.  I feel very flattered that Twain (no relation to Mark.) has my middle name, Evans, as his middle name.  Such a smiley baby! I’ve yet to see him cry.

Having a new small child sitting in the garden on Locust Hill has reminded me of all the years I spent educating children about the joys of Mother Nature. I guess I was too busy to teach my girls much except how to weed and pick the beans, but I had a grand time teaching my grandchildren.
I have six, but sad to say, Trum’s two girls grew up far away in , and Tam’s girl and boy far away in .

Fortunately Bridget’s two boys spent summers on Locust Hill in their early years, and were constantly helping me in the garden. 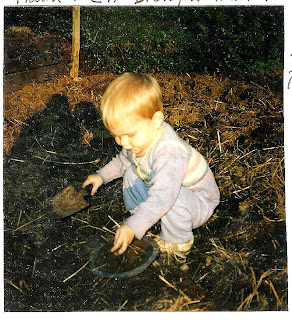 Eli, pictured above, was particularly enthusiastic, even as a toddler.  Both he and Reed learned a lot about what grew on Locust Hill, and when they were seven and nine I sent them on a treasure hunt together to see how much knowledge of the farm they’d acquired.

I wrote out my clues on white cardboard and tucked them in a variety of places. “Look behind the biggest pumpkin for your next clue.” “Where are the sunflowers?”  “Your next clue is hiding under a delphinium.”  “Tired?  Have a rest on great grandfather’s big swing.” The two boys raced around Locust Hill and had no trouble finding the clues, galloping up to the manure pile behind the barn to check out the pumpkin patch and remembering the sunflowers I’d planted way down by Hank’s shop.

The treasure hunt was such a success that the next summer I designed a scavenger hunt, giving each grandchild a basket and a list of things to find.  The list included items such as a birch tree catkin, a stinging nettle, a poppy seed capsule, a feather, some frog eggs, a ripe raspberry, and a pachysandra leaf. They had a real struggle to figure out that long word!

Reed was smart enough to hold onto an old rag when he pulled his stinging nettle, knowing how to avoid the awful itch.  Eli knew about the itch, too, and explained that he'd picked a beautiful blue lobelia as a substitute.

The last thing on each list was “the most beautiful thing and the ugliest thing you can find.”  Reed’s choices were a perfect lemon lily bloom and a festering, moldy apple that had been floating in the pond for a week. Eli’s choices were a bird’s pale blue broken egg shell and some scummy green algae vegetating in a neglected birdbath.

It was very satisfying to discover how much knowledge of flora and fauna my grandchildren had absorbed in their short lives.  I hope in a few years that baby Twain will be as much fun to teach.

I’d like to remind everyone that the Norfolk Library’s fabulous book sale will be held on August 25th and 26th from to .  There have been many more books donated than in past years.  From the first of June until the deadline on July 31st, the 40 foot long ramp that slides the donations down to my sorting table was solidly full of boxes day after day.

Obviously dozens of people have switched to “E-books” and decided to give the library what I call their “Real Books.” As a result over 100 hard-cover novels in mint condition have been donated this year.   And as usual, there are beautiful books in all the other categories,  from History and Biography to Gardening and Cooking, Sports and Science and of course hundreds of children's books.  There are 14 categories in all, so do come browse and buy.

Posted by Weeds and Wisdom at 3:14 PM