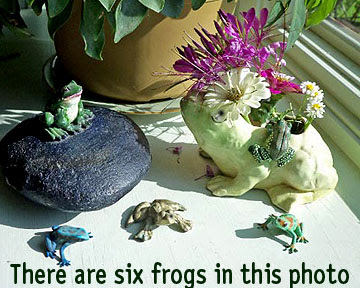 So many summer songs! Sit on the porch in the evening and listen to the grand variety of insect sounds – sweet or shrill, soft or metallic, melodic or droning.  Unlike good children who are seen but not heard, summer insects are usually heard but not seen.

It all begins with the sweet piping of the spring peepers.  As the soft gray pussy willows turn to yellow catkins, the volume of this cheerful chorus grows almost deafening until the skunk cabbage leaves rise to fill the marsh when it peters out.

When April slips into May another frog choir made up of the greens and the leopards tunes up at the edges of the pond as dusk falls.  These fellows (girl frogs hardly ever speak, much less talk back) are followed by the belching “chuggarums” of the bullfrogs. 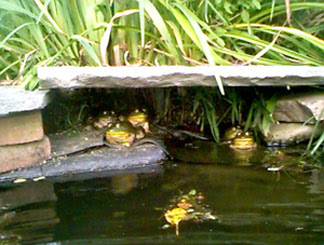 Soon the tree toads start, a happy trilling from the treetops. And by July the evening is filled with the rasp of the katydids.  As the days grow hot and sultry we hear the scratchy buzz of the cicadas, constant and monotonous.

Then all too soon we hear the cricket’s serenade, the finale of summer’s sounds.  As the days grow shorter and woodland green turns to scarlet and gold, this black instrumentalist appears from wherever he’s been hiding, tunes up his squeaky violin and offers us a plaintive requiem.  When those sweet notes are gone, autumn has buried the gardener’s season under a blanket of fallen leaves.

The joyful chorus of the peepers each April tells us spring has arrived.  These tiny creatures are less than an inch in size, but their “pee-eep,” two notes between B and E two octaves above middle C, can travel over open meadows for more than a mile.  They get their Latin name, Hyla crucifer, because of the small black cross on their brown backs.  Like bigger frogs their tiny throats balloon out just like bubble gum with each peep.

Tree frogs, Hyla versicolor, are not much bigger than peepers, and as you might guess from their Latin name, can be brown, gray, green or mottled.  They start life as minute tadpoles, but as soon as they replace their gills and tails with lungs and feet, these little frogs hop to land and head for the trees.  They have large disks on both their fingers and toes to make climbing easy.  Their enthusiastic trill is at least an octave below the peeper’s song.

One rarely sees the tree frog, but one year there was such a  stupendous trilling in our front yard that we went out to look.  Apparently dozens of tadpoles had suddenly turned into tree frogs all at the same time.  Hopping up the bank from the pond, they’d mistaken Bridget’s bike for a tree.  The handlebars and seat were solid tiny frogs, squished together and trilling with all their might.  What a sight!

The cicadas,  from the 17-year variety, which remains underground for that length of time, to the annual, dog-day cicada, which is the primary food of the digger wasp, all emerge from the soil in August and live in the treetops, enjoying the hot weather and making their atonal buzzing both day and night.  But they live for only a few short weeks before returning to the ground to lay their eggs and die.

The great green katydid is a long-horned grasshopper, who makes his summer noise by scraping the toothed file on his left wing with the “scraper” on his right wing.  Normally he picks his tuneless banjo only twice, “ka-ty” but sometimes three times, “ka-ty-did.” He’s likely to repeat one or the other 30,000,000 times a summer.

All too soon we’ll be hearing the cricket’s requiem that ends the summer’s symphony.  Enjoy it while it lasts.
Posted by Weeds and Wisdom at 9:24 AM