Which Tree is That? 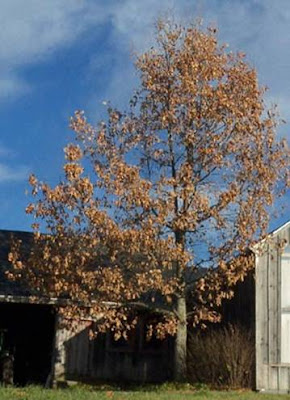 Are you taking the kids to Grandma’s over the holidays?  There’s nothing like a good car game to keep them happy on a long drive.  When I was little we tried to spot passing objects that started with the letters of the alphabet – Airplane, Beard, Cow.  If my Dad got to the Q he’d claim he’d seen a Quaker coming out of church.

Hank’s family played more educational games.  His favorite was “House Dates,” guessing the period when a house was built by its architecture.  I was hopeless at that, and when we traveled with our own kids we played a game called “Tree ID.”

Identifying roadside trees when you’re whipping by them at 55 miles an hour can be pretty tricky, but they’re far easier to label in winter than summer.  Leaf shapes are just a blur from a passing car, but when they’ve been shed, the tree’s skeleton is revealed, providing helpful clues.

It’s a bit like people. A man in uniform makes a certain impression, but strip him down to his BVDs and you get an entirely different picture.  Lest I appear sexist, I might add that a fat woman in a girdle and a slimming dress often manages to disguise what’s underneath.

Tree ID is a fun game even for children, but give beginners a break.  Let the kids use broad categories – fruit tree, conifer, maple.  When they say a tree which still has its leaves like the one pictured above is an oak, don’t ask “a pin oak? A black or white oak? ” Actually the one above is a red oak.

You’d be surprised how many trees are so distinctive that once learned they’re easily identified.  A weeping willow’s pendulous branches or an avenue of poplars, straight and tall as a column of soldiers, are unique.  How about the soft green needles of a white pine or the distinctive white bark of a paper birch? 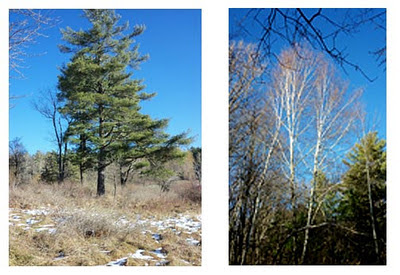 Many trees have distinguishing bark. A very common tree found in has the very shaggy bark pictured below, so once you’ve learned it’s a shagbark hickory you’ll never have trouble identifying it.  Those ragged strips which curl out from the trunk in such an unkempt fashion are certainly shaggy. 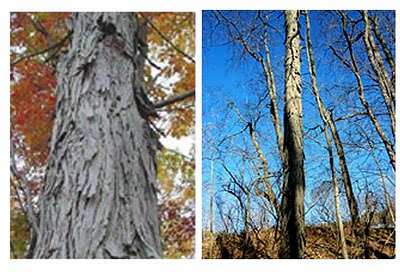 Nothing else looks like the bark of a sycamore.  Its thick limbs are mottled with splotches of white, and if you’re lucky, a few “buttonballs” will be dangling from its branches. The popple and quaking aspen have conspicuously yellowish bark and usually die young.  Beech trees have extremely smooth bark of silvery gray, and hang onto their pale yellow leaves well into winter.

The winter silhouette of the black locust has such twisted, crooked limbs it belongs in one of Chas Adams’s spooky cartoons.  I saw these trees for the first time when we were house hunting and drove up Locust Hill Road on a bleak November day.  I thought they were really ugly, but when spring came I changed my mind.  A blizzard of blossoms filled the air with perfume and turned the road white as they dropped their petals. 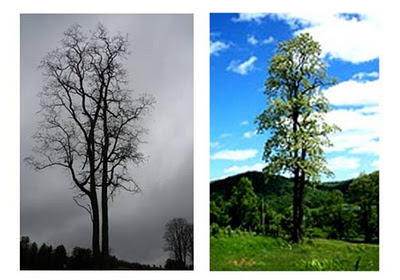 Where a tree is growing can be another helpful clue in Tree ID.  At this time of year a small graceful tree with red berries in a front yard usually can be spotted as a dogwood. A row of large, heavy-limbed trees with rough, corrugated bark along a country road must surely be the sugar maples some farmer planted 100 years ago. Staghorn sumacs like to clutter up roadsides, their candelabras of velvety red seedpods still conspicuous as winter arrives.

Gnarled, fat-trunked trees by a river, sprouting burls and bristling suckers are probably black willows.  Marshes usually contain swamp maples whose leaves turn a brilliant scarlet each fall.  Once you learn that the conifer whose green needles turn teddybear brown as winter arrives is a tamarack, you’ll never have trouble identifying it.

A forest tree rarely resembles an open-grown tree of the same species, the same way a scrawny orange barn cat living on mice won’t look like his fluffy cousin living in the house and enjoying liver bits and cream.  A maple tree hemmed in by a crowd of white pines will be very different than one that has stretched out luxuriously in an open meadow.

Try playing Tree ID. Maybe next summer we’ll take a woodland walk and try identifying the trees by their leaves.   Have a Merry Christmas.
Posted by Weeds and Wisdom at 1:54 PM