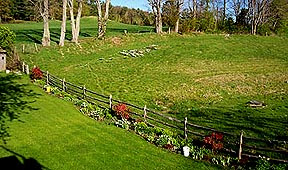 In case you haven’t read my last column, Mrs. Eddison is the gardener whose book “Gardening for a Lifetime” offers some great suggestions on how to simplify a large garden when it becomes just too much to manage.  Besides her most sensible advice, “Get a helper,” she has many other good ideas.

Use mulch.  We all know that a heavy mulch in the garden can save hours of weeding, helps retain moisture and provides nutrients for the soil as it decomposes.  Mrs. Eddison uses shredded leaves and claims they are by far the best mulch.  Shredded leaves? I liked that idea, but shredding leaves turns out to be a little complicated as you need something like a brush hog to do the job.

In the fall you rake the leaves into a pile, drive the raised brush hog over the pile and set it down on it.  Voila!  Shredded leaves.  I haven’t tried this yet, since I find dealing with the tractor’s brush hog difficult. Maybe a lawn mower would do the trick, but I wonder if once you’ve managed the shredding, are the leaves scattered all over and require another raking? I mulch my border with unshredded leaves.

If you have a perennial border like mine, it probably contains many plants that require constant work such as dead-heading, staking, or pruning.  Some plants like to sprawl into the territory of other perennials and need to be kept in their place. Others self-seed so readily that new ones pop up every year.  And there are some plants that stop looking attractive once they’ve finished blooming.

You may not want to give up your favorite delphiniums which always need staking or your handsome iris that wants constant dead-heading to look well, but if you’re trying to cut down on the upkeep of a garden, eliminating plants that cause extra work is one way to do it.

There are many easy-care plants that make good substitutes for those that have some of the faults listed above.  For instance, the white, pink or maroon spires of the tidy perennial Astilbe look good all summer. The sedum Autumn Joy with its thick green leaves that become a rich burgundy each fall is another well-behaved perennial.   Hostas, which I’ve always considered rather dull when planted in a row, can be attractive used as a single plant intermingled with other perennials. There are dozens of varieties to choose from and all require little work by the gardener.  To replace tall plants, try some of the attractive ornamental grasses.

Small, slow-growing shrubs that may only need a little pruning offer another idea for the perennial bed.  When I read that suggestion I immediately was reminded of my quince bushes, blooming in the top photo.  I planted these prickly early bloomers years ago to compliment the daffodils that also bring color to the spring garden.

Those quinces were just little well-rooted suckers I’d dug up from around a friend’s bush way back when I knew very little about their habits.  It was a big mistake.  The quince is designed to be a large shrub and needs pruning at least twice a summer to keep its shape, a very thorny job.  And what’s worse, all that pruning encourages endless new shoots to sprout up around the mother plant.

I loved the idea of replacing these difficult shrubs with some less troublesome species.  Potentillas immediately came to mind.  I have these low-growing shrubs on the bank below the pond. They bloom for almost the entire summer and I’ve never had to prune them.  Or one of my favorite shrubs, the variegated euonymus.  The one pictured below grew by leaps and bounds this summer, but so did everything in .  It’s at least 35 years old and I’ve never pruned it, except to take branches here and there to use in flower arrangements. 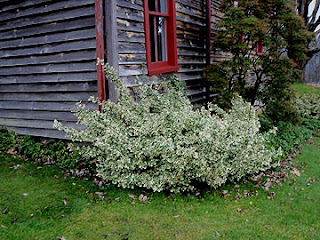 So many different shrubs – hydrangeas, syringas, all the slow-growing evergreens such as laurels or cotoneasters.   I was so excited thinking about all these choices that last weekend I talked Piper, my only grandchild who likes gardening, into helping me tackle one of the quince bushes when she was here.  What an enormous job!  Cutting its branches down to stubs was a breeze, but the rest was agony.  It took close to 3 hours to uproot  and release that quince, clipping and lopping a zillion roots, which I know will send up a zillion suckers next spring. 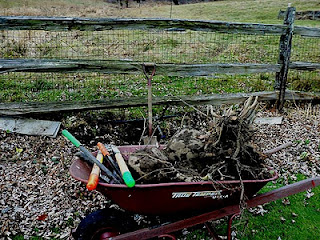 And I still must face the other two quince bushes.  How ironic, when I think of the work involved to make my perennial border require less work!
Posted by Weeds and Wisdom at 1:21 PM