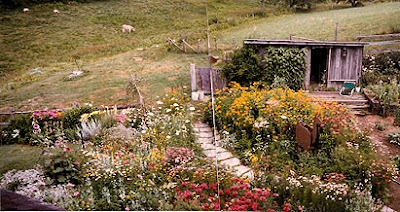 Have you ever bought one of those flower seed collections the catalogs all brag about?  The most popular ones produce a huge variety of wild flowers, but there are also many other types – cut flowers, shade lovers,  even one promising  continuous bloom of bulbs from spring until fall.

Most gardeners I know who’ve tried planting a collection have had little success, so I’d like to tell you about my experience planting “The Artist’s Garden,” a collection of 150 varieties of flowers that Claude  Monet had grown at Giverny, his famous garden outside .

In 1987 when I discovered the freezer still contained six packages of vegetables I’d put up in 1984 I realized it was time to shrink the vegetable garden.  It was 50’ x 50’, filling the entire back yard and had fed our family of five for many years, but with all the children married, it obviously was way too big.

What better place to begin a flower garden than an area that had been tilled and manured, weeded and watered, was full of sunlight and nicely protected from  early frosts?   The Artist’s Garden packet, given to me for Christmas several years earlier, had been sitting in a drawer unopened, since I’d never figured out where to plant it.  Now I’d found the perfect place!  I'm sure choosing it was the reason my Monet garden became such a success.

That winter I opened the Artist’s Garden packet and began reading.  What a challenge! The list of flowers included in the collection was awesome.  Groups of either annuals or perennials were sorted by color and size – Annual/short/blue - Perennial/tall, yellow. _Annual/medium/red-pink. etc.  All the names were in Latin.  The design instructions were not exactly helpful. either.  “Do what you think will look good. There are no rules.”  Hmm. I’ve never been fond of rules, but in this case I could have used some.

﻿﻿﻿﻿Once it finally warmed up in late May, I raked and roughened up the soil, then broadcast each container of seeds over the area, scattering the tall varieties toward the garden’s edges, the short ones close to the paths, the in-betweeners in between.  Then I carefully sprinkled four or five buckets worth of compost over the seeds, raked again and was rewarded by Mother Nature who sent down a soft gentle rain.

As the dozens of unfamiliar seedlings began popping up that first summer, I spent hours trying to identify them.  Garden books are full of photos of beautiful blooms, but not a single one of a seedling.  I felt like Sherlock Holmes as I peered at these wispy little stalks of greenery with my magnifying glass and concluded that I should not pull up anything I couldn't recognise as a weed.
﻿

As it turned out the most prominent flowers that summer were my own - feverfew and pink poppies - that always appeared whereever I sprinkled my compost.  They looked gorgeous, but they weren't Monet's, so I didn't bother taking a photo. The only Monet plants that showed up were the white and pink companulas.

But the following summer I began to see dozens of new flowers as the perennials matured and blossomed.  Solving the mysteries of those unknowns that had previously haunted me was a delight.  What fun to see the first delicate lavender blooms of Granny Bonnet columbine, so different from the yellow and red of the wild variety. What a relief to see that a clump of unknown seedlings had turned into handsome mallows.

There was one particular little vine  that I had resisted pulling up. It looked just like some useless weed, but at last I was rewarded  for my patience -- tiny pink blooms opened their eyes as they nestled in a bed of soft gray lamb’s ears. I'd saved a creeping baby’s breath, Gypsophilia repens-rosea..

I could write another whole  column on the Artist’s Garden, just describing the agonies and ecstasies I went through in the next five years.   My feelings ran the gamut from frantic frustration to ecstatic enthusiasm.  Excitement, exhaustion,  chagrin at my ignorance, every imaginable emotion except boredom.

By the fourth year the rarest flowers had been pushed aside by more common species included in the collection - Queen Ann's lace, goldenrod and even morning glories, which strange other plants and deserve their other name, bindweed. 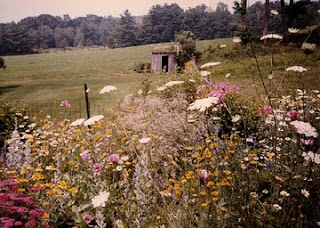 I was also beginning to miss having a vegetable garden, so daughter Bridget and I dug up the plants from a corner of the garden and transported them across the meadow to her house. 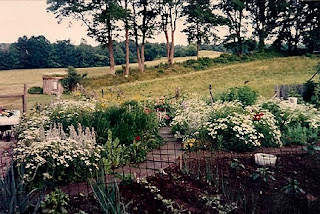 I continued to enlarge my botanical knowledge finding new and different plants, but by the fifth year the endless maintenance seemed almost too much.  There is constant work required to maintain such a large crazy quilt of blooms looking well. Dead-heading the spent blossoms, keeping the weeds at bay, thinning the more invasive plants, staking the tall plants like delphiniums and foxgloves.

By the fifth year  the Artist's Garden  had stopped being a labor of love and as fall neared I began calling my garden friends, inviting them to come and take home whatever plants they'd like.  Bridget and I cleaned up the leftovers and by October we had the first signs of the new lawn that would take over the area. The Artist's garden had been a marvelous introduction to new and different flowers, a never-ending supply of bouquets for the house and a fantastic learning experience.

If you decide to try planting a seed collection, just remember that preparing the area is eccential and probably best done a year in advance.
﻿

Posted by Weeds and Wisdom at 2:02 PM