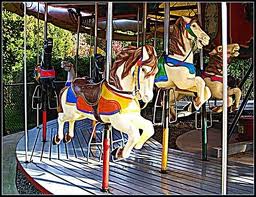 Can you remember the excitement of a carnival’s Merry-go-round when you were a kid?  Racing to get on the big black horse, then deciding you like the white one better, then finally settling on the little gray pony so you’d be next to your buddy. The first warm days of spring are a gardener’s Merry-go-round  as we rush from one job to another. The excitement of seeing that your special rose bush has survived the awful winter, then noticing the delphiniums already need staking, heading back to the shed for stakes,  but unable to resist the sight of a scummy birdbath and getting a bucket instead and…

You get the picture.  Just a thousand different horses to choose from.  This year the first day my back was good enough to let me contemplate getting on my Merry-go-round, I thought I’d  start by checking out the Abitta garden.  To my amazement it was thick with Self-Heal, an interloper I’d never seen on Locust Hill before.  How or why it had managed to settle there, uninvited, was a puzzle. 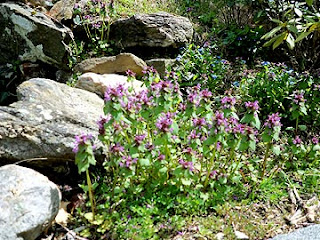 Prunella vulgaris, the Latin name for self-heal, flips off my tongue with ease because in one of the early paragraphs in my Wildflower program I say “By the time I got married and moved to my husband’s home town, I’d long forgotten all those Latin names I learned in college Botany, and didn’t know whether Prunella vulgaris was a wildflower or possibly one of Hank’s old girlfriends.”

Fortunately good old Prunella has a small weak root and is easily pulled up, but once that job was done, my back needed a rest so I walked down the perennial border, just admiring the sight of the little green hands of lupine leaves, the dazzling clumps of forget-me-nots, unable to resist dead-heading finished daffodil blooms, finding a dozen peony shoots pushing up from under last year’s old leaves. 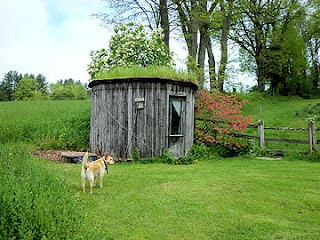 At the end of the border is a funny little building we call our Hottentot house.  Back in the early 70s we were inspired, having just enjoyed our first sauna  while visiting friends in Vermont,  to construct one of our own.  The Hottentot is a circular building made out of the tongue and groove boards from an old silo George Ford had just pulled down. We cut the boards into eight foot lengths, set them up against the circular foundation we’d poured, and tightened them together with wire, the same way you’d make a barrel, and  topped them with a plywood roof. Inside we constructed a platform which we filled with sling-backed chairs (so much more comfortable than benches,) put in an old kerosene stove  and  filled its top with a pile of nice round stones.

We had a double reason to build the sauna.  Because our new pond leaked badly, it was only full and swimmable in the spring and fall, and resembled a mud puddle in the heat of summer.  The sauna allowed us to dive into the icy water in April and May and again in October and November.  A few years later we added industrial rubber to the roof so I could plant a variety of flowers on it. The roof's baking heat required  almost daily watering, more frequent than I could manage, so the only plants to survive were dandelions and weeds, but we continued to use the sauna frequently until the kids were married and were no longer living at home. From then on it was only used to store inner tubes, life preservers and other swimming paraphernalia. 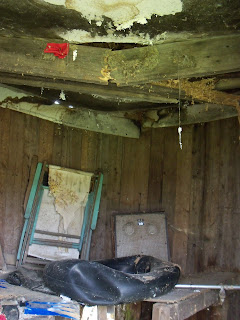 What can happen to a neglected building over a period of twenty years can be shocking.  When I opened the door that day, I could hardly believe what I saw.  The weight on the roof combined with termites had collapsed the large roof beam. The silo boards had rotted in places, leaving large holes in the walls. Woodbine vines growing at the back of the building had snuck inside and wrapped themselves around the chairs whose cloth backs were tattered rags.   Decay had turned our Hottentot house into a catastrophe.

I’m sure if Hank were here instead of in heaven, he’d have some wonderful idea of what to do, but I am a total blank. Is it worth repairing? If I tear it down, what do I do with the cement floor?  Should I buy a gazebo to take the Hottentot’s place?  I’ve been looking at dozens of gazebos on the Internet.  They're very expensive and they're just too cutsey.  I can't picture any of them on Locust Hill. And what would we use a gazebo for anyway?   It would be too open to hide the mess of swimming gear (with the leaks fixed, the pond is swimmable all summer long) or the tangle of weeds and woodbine sprawled behind it.  If any of you have a suggestion to solve this Hottentot problem, please send me an email.  In the meantime, I've shut the door.

Before the day was over both my back and I had cheered up and I continued on my Merry-go-round, transplanting a half-dozen clumps of forget-me-nots that had appeared in the vegetable garden to spots in the border, weeding around the blueberry bushes I bought last year and mulching them with fresh pine needles. They didn't look very happy, so the last thing I did was mix up some Spray ‘n Grow (a marvelous concoction that acts like a double dose of vitamins to plants) and gave the blueberries a bath and used the rest of the mix on the clematis vines, tree peonies and other perennials.

What a treat to finally spend a warm day in the garden.  I hope you're enjoying your days on the garden Merry-go-round.  We've certainly waited long enough for spring to arrive, haven't we?

Posted by Weeds and Wisdom at 4:03 PM